It’s been 3 years since the dazzling fireball over Chelyabinsk, Russia, and its aftereffects in 6 Russian cities. Yet scientists still don’t know its origin.

On February 15, 2013, many on Earth were watching for news of the approach of an asteroid labeled 2012 DA14. Suddenly, those watchers – and millions of others around the globe – were startled by news of a superbolide, or super bright meteor, above the region of Chelyabinsk in Russia. It seemed that day as if the heavens were gunning for us! The Chelyabinsk meteor exploded at a height of 12 miles (20 km) above Earth, releasing 500 kilotons of energy, approximately 30 times the yield of the nuclear bomb over Hiroshima. It caused a shock wave that broke windows in six Russian cities and caused some 1,500 people to seek treatment for injuries, mainly from flying glass. Later, about five tons of meteoritic material reached the ground, including a 1,400-pound (650-kg) meteorite that was recovered by divers from the bottom of Russia’s Lake Chebarkul. Now, three years later – after more than 200 scientific studies – scientists say they’re still looking for the origin the Chelyabinsk superbolide.

They continue to confirm that it was not related to asteroid 2012 DA14. But, since asteroids in space are known to travel in pairs or groups, they want to know if the Russian meteor had a parent body, and if that body is a known object in space.

In other words, what do we know, if anything, about the origin of this cosmic close call?

To figure it out, they first have to determine the orbit of the Chelyabinsk meteor. Among the published studies is a catalog of 960 video recordings, much of it captured by security cameras, traffic cameras, dash cams – which are popular in Russia – as well as manual recordings made with the video cameras and webcams of those who saw it.

These images and diverse scientific data compiled during the event have let scientists calculate the trajectory of meteoroid after it entered Earth’s atmosphere.

And that information helps scientists calculate possible initial orbits for the 19-meter-wide (about 20 yards wide) space rock around the sun, before it struck Earth’s atmosphere. 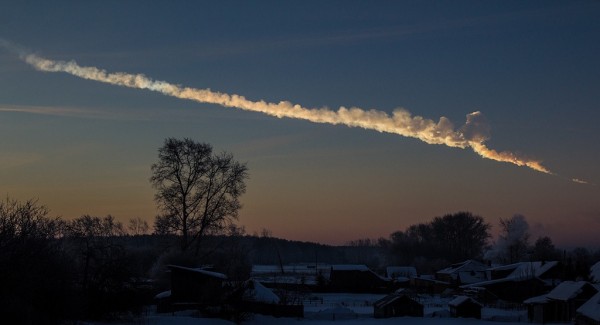 On same day as the Chelyabinsk meteor – February 15, 2013 – the asteroid 2012 DA14 was still approaching Earth. It ultimately passed about 17,000 miles (27,700 km) above the Earth’s surface, 16 hours after the Chelyabinsk superbolide explosion and the fall of the large meteorite on the Russian Lake Chebarkul.

Could 2012 DA14 have been related to the Chelyabinsk meteor?

At the beginning, it seemed possible to everyone that these two events might be related. But astronomers quickly compared what was known about the orbit of 2012 DA14 with a preliminary orbit for the Chelyabinsk meteor, and quickly said the two looked completely different.

After closer studies of the two objects, they’re now believed to be completely independent and unrelated. In their statement on February 15, 2016, scientists said:

It was a mere, albeit very unusual, coincidence in time of two spectacular cosmic events.

Read more: How do we know the Russian meteor and 2012 DA14 aren’t related? 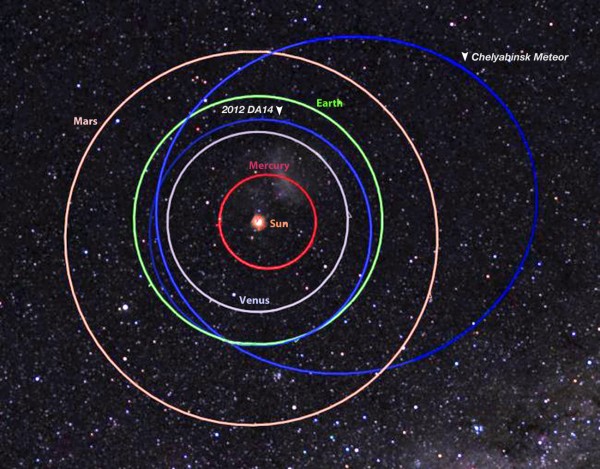 Difference between the orbits (in blue) of Chelyabinsk meteoroid and 2012 DA14 – now called 367943 Duende. Image via NASA/MSFC/Meteroid Environment Office, via Wikimedia Commons.

Where in space did the Chelyabinsk superbolide come from? Did it have a parent body, and was that body a known object in space?

The answer is that we don’t yet know for certain, but scientists are still trying to figure it out.

One possibility is the asteroid 2011 EO40, which is known to have frequent close encounters with Venus, the Earth and moon, and Mars. Scientists said in their statement:

The common origin of both celestial objects is a possibility that cannot be discarded using the currently available evidence.

In the course of these studies, the scientists have realized that the Chelyabinsk impactor likely passed a gravitational keyhole on February 15, 1982 during a close encounter with our planet. At the time, the closest distance was about 140,000 miles (224,000 km).

As a result of this close encounter, the initial trajectory of the Chelyabinsk meteoroid was changed into the one that drove the meteoroid to strike the Earth over three decades later.

Read more about recent studies searching for the origin of the Chelyabinsk meteor. 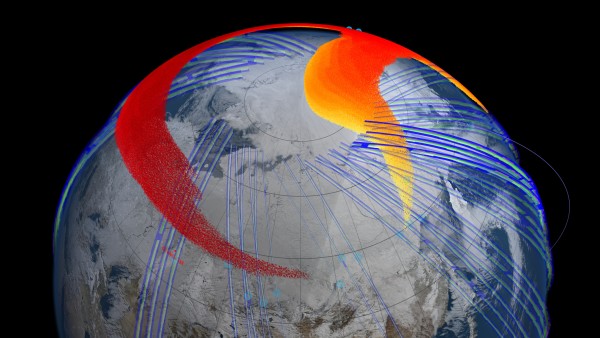 Four days after the Chelyabinsk meteor exploded in the atmosphere over Russia, fast-moving dust particles in higher altitudes of the atmosphere, shown in red, had circled the globe. Image via NASA Goddard’s Scientific Visualization Studio

Bottom line: Scientists are still seeking the origin of the Chelyabinsk meteor, which streaked across skies over Russia on February 15, 2013.