Which stars are the most likely to have habitable planets? A new study suggest that K stars – between the dimmest M-type red dwarfs and sunlike stars – might provide the sweet spot for life. 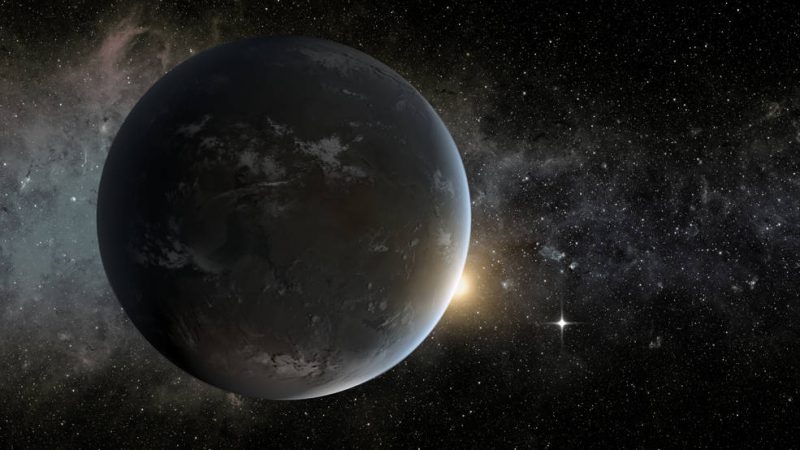 Artist’s concept of super-Earth exoplanet Kepler-62f orbiting a K star. Such worlds might be among the most likely to host life. Image via Ames Research Center/JPL-Caltech/Tim Pyle.

Astronomers have discovered more than 4,OOO exoplanets – including some that are potentially habitable – in recent years. They’ve found exoplanets orbiting stars similar to our own sun. And they’ve found them orbiting non-sunlike stars, for example, small, cool red dwarfs. Looking for planets that might support life is one of the primary and most exciting goals of planet-hunting. And so astronomers want to know which stars are the most likely to have habitable planets.

These stars can be thought of as Goldilocks stars that are just right – at least in some ways – for potentially life-supporting planets. The nickname is reminiscent of the Goldilocks Zone or the habitable zone, the region around a star where temperatures on a rocky planet allow liquid water to exist.

A new peer-reviewed study published in The Astrophysical Journal Letters on March 6, 2019, might help to narrow down the search for Goldilocks stars. The study is by Giada Arney of NASA’s Goddard Space Flight Center.

Surprisingly, according to Arney’s study, the best stars might not be those like our sun. Instead, K stars – dimmer then our sun but brighter than M-type red dwarfs – might be the ideal candidates. K stars can live for 17 to 70 billion years, much longer than sunlike stars, which shine on the main sequence for only about 10 billion years. The longer lifespan of a K star would give life on an orbiting planet more time to evolve, if it ever got started.

K stars are also less active in their youth, with fewer extreme solar flares that could wipe out any life on a young planet. By contrast, small M-type red dwarfs are more intensely active; life starting out on a planet orbiting an M star would need to find a way to survive, somehow, in an extreme environment.

Arney pointed out that M stars do have some advantages. They are the most common type of star, and live on the main sequence more than a trillion years. But their solar flare activity is problematic, especially in their youth. They also have more energy when they are younger, possibly enough to boil off oceans on any nearby rocky planets.

K stars are somewhere in the middle between M stars and sunlike G stars. Arney said:

I like to think that K stars are in a ‘sweet spot’ between sun-analog stars and M stars.

How could we detect life on a planet orbiting a distant K star? The first thing to determine is whether there are potential biosignatures – chemical hints of life – in a planet’s atmosphere. One such biosignature would be the existence of both methane and oxygen. Since those gases tend to destroy each other quickly, then – if we found both – we could assume something, possibly life, must be producing both on an on-going basis. 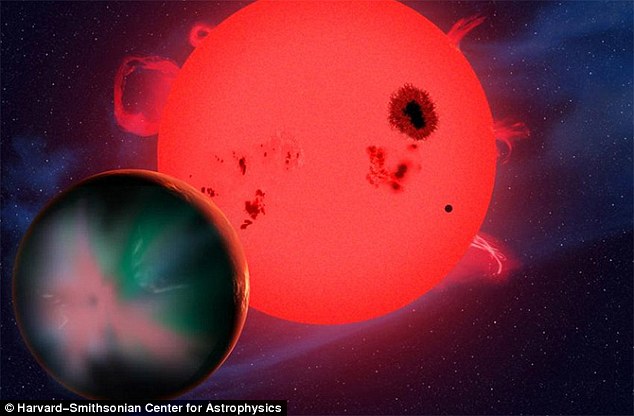 Arney used a computer model to simulate the chemistry and temperature of a planet’s possible atmosphere, to see how it behaves around different types of stars. Another model simulated the spectrum of the planet’s atmosphere as it might be viewed by a future telescope. As she explained:

When you put the planet around a K star, the oxygen does not destroy the methane as rapidly, so more of it can build up in the atmosphere. This is because the K star’s ultraviolet light does not generate highly reactive oxygen gases that destroy methane as readily as a sun-like star.

The analysis also suggested that a methane-oxygen signal might be stronger around K stars. The same has been predicted for M stars, but again, their intense solar flare activity could complicate the development of life.

Another advantage of K stars is that planets are easier to detect – even seeing them directly – than around brighter sun-like stars. As Arney commented: 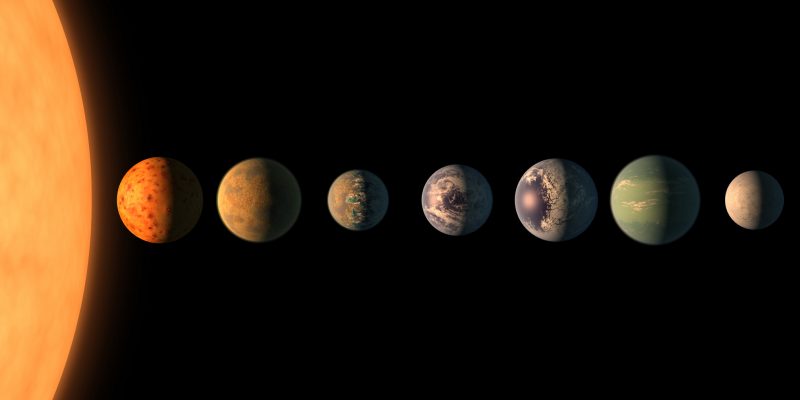 Potentially habitable exoplanets can also orbit M stars (red dwarfs), such as the seven Earth-sized worlds in the TRAPPIST-1 system. Image via NASA/JPL-Caltech.

Arney also listed some of the nearby K stars that might be the most likely to have habitable planets:

I find that certain nearby K stars like 61 Cyg A/B, Epsilon Indi, Groombridge 1618 and HD 156026 may be particularly good targets for future biosignature searches.

With over 200 billion stars in our galaxy alone, this work will help astronomers figure out which ones – and their planets – should be looked at the most closely in the search for not only habitable worlds, but planets that are actually inhabited, even if just by microbes.

Bottom line: In order to narrow down the best places to look for evidence of alien life – habitable planets – astronomers need to know which stars are the most likely to host such worlds where life could have started. This new study helps to do just that and will help scientists determine which planets should be primary targets for study.