Astronomers in Canada say they have found evidence for 45 new tiny moons orbiting Jupiter, and that the planet may have a staggering 600 such moons in total. 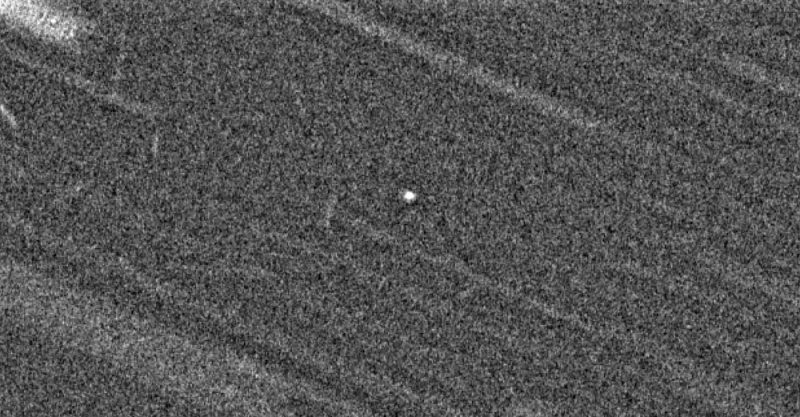 As the largest world in our solar system, Jupiter is often referred to as the king of planets. Its kingdom contains at least 79 known moons, second only to Saturn with 82. Now, a new study from the University of British Columbia in Canada suggests that there might be many more Jovian moons waiting to be discovered. If these astronomers are right, Jupiter might have as many as 600 moons whirling around it! These additional waiting-to-be-found moons are sure to be very small, on the order of about 800 meters (yards) in size, these astronomers say.

The findings will be presented virtually on September 25, 2020, at the Europlanet Science Congress 2020, but in the meantime, you can read the pre-print version of the new paper on arXiv, to be published in The Planetary Science Journal, and there is also an abstract on the ESC 2020 website.

This fascinating news was reported by the University of British Columbia on September 14, 2020, as well as by Govert Schilling at SkyandTelescope.org on September 8, 2020.

So how did these researchers come to their conclusion of 600 moons for Jupiter? 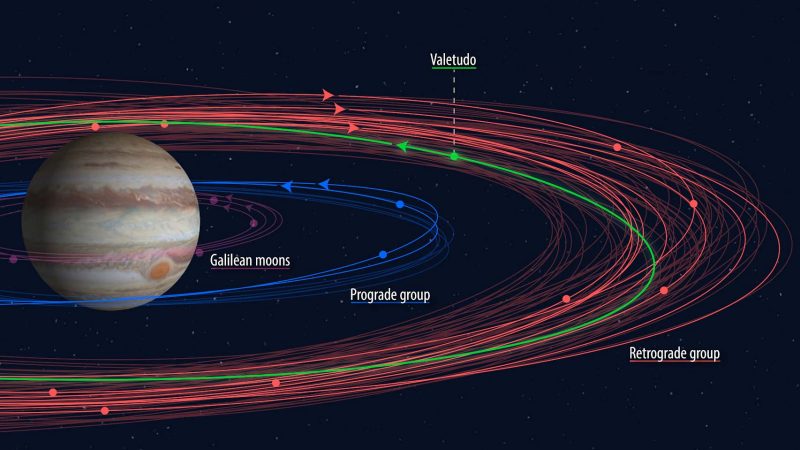 Schematic representation of the orbits of Jupiter’s 79 known moons. The 45 new tiny moons potentially discovered are thought to have irregular orbits and belong to the retrograde group. Additional such moons would also likely be in similar orbits, far out from the planet. Image via Carnegie Institute for Science/ Roberto Molar Candanosa/ SkyandTelescope.org.

Edward Ashton, Matthew Beaudoin and Brett Gladman at the University of British Columbia examined archival images of Jupiter, taken with the 340-megapixel MegaPrime camera on the Canada-France-Hawaii Telescope on Mauna Kea in Hawaii. The 60 images studied were all taken on September 8, 2010, within a period of three hours. In order to account for the various ways tiny moons might move across a field of view, the team digitally combined all the images in no less than 126 different ways. Their efforts paid off.

They found 52 possible new moons. The objects had diameters as small as 800 meters (2,600 feet), showing up in the images with magnitudes down to 25.7. Out of those 52, seven turned out to be already-known moons that are in irregular orbits, leaving a total of 45 new detections. The newly spotted moons also appear to be retrograde moons, meaning they orbit Jupiter “backwards” with respect to Jupiter’s rotation. This is a bit different from apparent retrograde motion, where a planet, such as Mercury, appears to change its direction moving across the sky as seen from Earth – but doesn’t really, of course – due to the relative positions of the planet and Earth and how they are moving around the sun.

It’s cool that the team found so many (unconfirmed) new moons, but how do they jump from those detections to 600 moons?

The answer is that this search was conducted in only one square degree of view of the space around Jupiter. By extrapolating to the rest of the region around the planet, the researchers estimate that Jupiter could have as many as 600 moons total.

Scott Sheppard at the Carnegie Institution of Science had previously estimated the number of moons larger than one kilometer (.6 mile) in size to be around 100. Regarding the new study, Sheppard told Schilling at SkyandTelescope.org:

We used a similar shift and stack technique for our Jupiter moon discoveries that were announced in 2018. In our paper, we also mentioned detections that we could not confirm as moons, because we didn’t observe them for the months and years required to reliably determine their orbits. 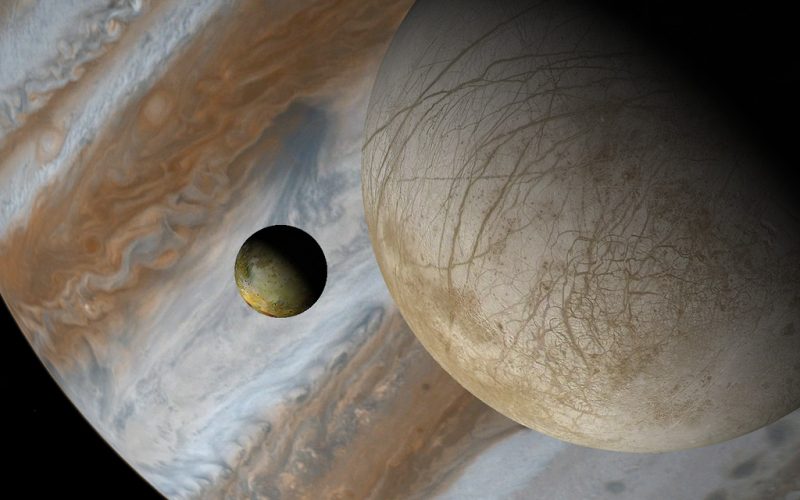 Jupiter is well-known for its four largest Galilean moons Europa, Io, Callisto and Ganymede (Io and Europa depicted here), but it also has many more much smaller moons as well. Image via ElChristou/ Wikimedia Commons.

As of right now, however, those 45 new moons are not officially confirmed, as their orbits have not yet been precisely determined. Sheppard said:

It takes a lot of large telescope time to get reliable orbits for these very small and numerous moons, so one has to decide if that is scientifically valuable.

The fact that Jupiter already has 79 known moons is incredible enough, when we think of how Earth has only one. But gas and ice giants are much larger and have much stronger gravitational pull, so it really isn’t too surprising that they have many more moons than smaller rocky planets do. Hundreds of moons for Jupiter might be more than you or I imagined, but science fiction writers have probed this possibility for years.

Unfortunately, at the moment, there are no planned follow-up observations to try to confirm these new moons. Ashton said:

It would be nice to confirm them, but there is no way to track them without starting from scratch. 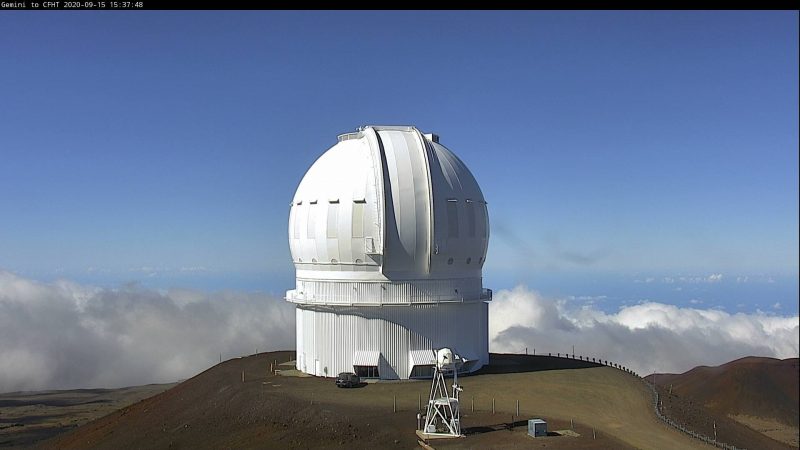 The upcoming Vera C. Rubin Observatory might be able to help find them again however. According to Ashton:

They will then be linked back, so our observations will eventually be incorporated.

These tiny objects are just big enough to be considered moons – or moonlets – according to scientists. And what about Jupiter’s rings? Like the rings of Saturn, Uranus and Neptune, they are composed mostly of particles much smaller than that, more like sand grains or even dust. It would be completely impractical to think of every one of those specks as a “moon,” obviously, so where is the size cutoff?

The answer is that the International Astronomical Union does not consider any rocky objects smaller than one kilometer (.6 mi) to be a moon. Ashton said:

Eventually one descends to ring particles, and some kind of cutoff will be useful. 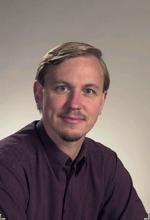 It was also reported last week that Jupiter’s moons seem to be warmer than expected. Most of the heat (on the insides of these worlds) was thought to come from Jupiter’s gravity tugging at the moons’ interiors, creating extra warmth. But now it seems that the moons may be heating each other more instead. This applies to the four large Galiean moons Europa, Io, Callisto and Ganymede.

Saturn currently has 82 known moons. And it is surely likely that future studies will reveal dozens or hundreds more in the Saturnian system as well. What about Uranus and Neptune? It will be very interesting to see if the researchers’ prediction for Jupiter holds up, and how many more of these tiny worlds will be found, within our lifetimes, orbiting the largest planets in our solar system.

Bottom line: Astronomers in Canada have found evidence for 45 new moons orbiting Jupiter, and say the planet may have as many as 600.