The sun drives Earth’s auroras. But Jupiter’s brightest auroras may be accelerated by processes within the giant planet’s own magnetic field. 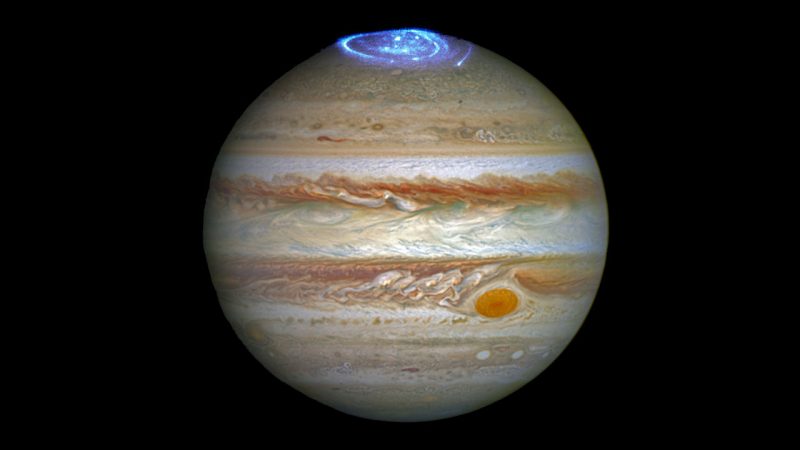 Jupiter’s auroras – depicted in this composite image – are by far the strongest in our solar system. Image via NASA/ ESA/ J. Nichols/ Sciencemag.org.

The sun is the ultimate cause of Earth’s brightest auroras – the mysterious and beautiful northern and southern lights – like those seen strongly this past Thursday night. Earthly auroras are generated when storms on the sun release electrons to space, which are then accelerated in our planet’s magnetic field and slam into gas molecules in the upper atmosphere above polar regions. This same process happens on Jupiter, too, but, according to a new analysis, sun-driven auroras aren’t Jupiter’s brightest auroras. In a September 6, 2017 article in Science, Sid Perkins wrote:

Scientists don’t fully understand what’s driving Jupiter’s strongest auroras, but data gathered by the orbiting Juno spacecraft hint that the electrons generating Jupiter’s polar glows may be accelerated by turbulent waves in the planet’s magnetic field — a process somewhat akin to surfers being driven shoreward ahead of breaking ocean waves.

Barry Mauk of the Johns Hopkins University Applied Physics Laboratory in Maryland led the team that conducted the new analysis. He commented in a NASA statement that understanding Jupiter’s auroras has practical implications for us on Earth:

The highest energies that we are observing within Jupiter’s auroral regions are formidable. These energetic particles that create the auroras are part of the story in understanding Jupiter’s radiation belts, which pose such a challenge to Juno and to upcoming spacecraft missions to Jupiter under development.

Engineering around the debilitating effects of radiation has always been a challenge to spacecraft engineers for missions at Earth and elsewhere in the solar system. What we learn here, and from spacecraft like NASA’s Van Allen Probes and Magnetospheric Multiscale mission (MMS) that are exploring Earth’s magnetosphere, will teach us a lot about space weather and protecting spacecraft and astronauts in harsh space environments.

Animated GIF made from a series of Juno images of Jupiter’s northern aurora. Juno acquired these images around the time of the new study. Images separated by 15 minutes, taken with the Juno Ultraviolet Spectrograph (UVS) in Jupiter’s northern hemisphere. Image via G. Randy Gladstone.

Read more from Science/AAAS and from NASA.