Color view from JunoCam, showing the planet, the Red Spot and several moons. Plus … calling all astrophotographers to participate in the mission! 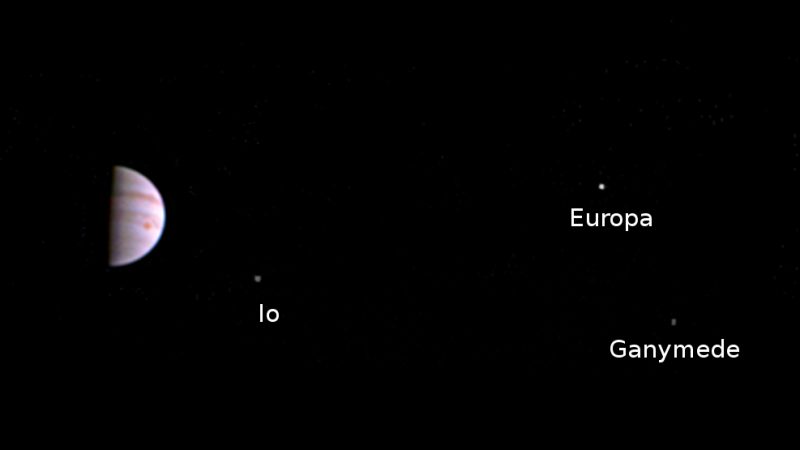 NASA released this color view of Jupiter and several of its largest moons late in the day on July 12, 2016. It’s the first image released from the Juno spacecraft, which is the first spacecraft to enter Jupiter orbit since Galileo in the 1990s. NASA is now testing the craft’s systems and calibrating its instruments, while calling all astrophotographers for help, but this initial view shows that the mission’s camera known as JunoCam survived its first pass through Jupiter’s extreme radiation environment. Phew.

JunoCam acquired the image on July 10, 2016 at 5:30 UTC, when the spacecraft was 2.7 million miles (4.3 million km) from Jupiter on the outbound leg of its initial 53.5-day capture orbit. Juno will spend 107 days in this highly elongated capture orbit. Scientists chose to take this long way around instead of inserting Juno directly into its final, 14-day orbit, because the direct route would have required a lot of fuel.

JunoCam will continue to image Jupiter during Juno’s capture orbits. The first high-resolution images of the planet will be taken on August 27 when the Juno spacecraft makes its next close pass to Jupiter.

Juno’s final orbit around Jupiter, by the way, has been called “the most challenging ever attempted.” It’ll ultimately bring the craft as close as just 3,100 miles (5,000 km) to the planet’s cloudtops.

The video below – which has been watched 1.4 million times on YouTube – shows Juno’s awesome approach to Jupiter:

Aww snap. My first in-orbit view of #Jupiter. Getting up close and personal again on Aug 27. https://t.co/Xw4VHVO6rJ pic.twitter.com/b2FuTpriKf

Calling all astrophotographers! The official science collection phase of the Juno mission begins in October. In the meantime, the JunoCam team is calling all amateur astronomers and astrophotographers to upload their telescopic images and data of Jupiter. On JunoCam’s web page, the team explained:

These uploads are critical for the upcoming Discussion section (now live!) and will help NASA successfully plan the future of the mission.

If you’re a veteran astrophotographer or if you’re just getting started with your first telescope, we highly recommend you read our Submission Guidelines before submitting data. In the PDF you’ll find information about the best capture and process workflows as well as links to free software and tutorials.

Before you go, check out the video below. It’s an animation, showing Juno’s graceful sweep through space, on the 5-year voyage to Jupiter. Wow. It’s hard to realize sometimes – amidst the chaos of earthly affairs – that we’re also truly space-farers.

Bottom line: First color view from the Juno spacecraft’s Junocam, acquired from Jupiter orbit on July 5, 2016. Plus information on how amateur astronomers and photographers can participate in the mission.