This animation takes the viewer on a simulated flight into, and then out of, Jupiter’s upper atmosphere at the location of the Great Red Spot. It was created by combining an image from the JunoCam imager on NASA’s Juno spacecraft with a computer-generated animation.

Data collected by NASA’s Juno spacecraft during its first pass over Jupiter’s Great Red Spot in July 2017 indicate that this iconic feature penetrates well below the clouds. The findings were announced Monday (December 11, 2017) at the annual American Geophysical Union meeting in New Orleans.

To date, NASA’s Juno spacecraft, launched in 2011, has completed eight science passes over Jupiter. Juno’s ninth pass will be on December 16. During these flybys, Juno is probing beneath the obscuring cloud cover of Jupiter and studying its auroras to learn more about the planet’s origins, structure, atmosphere and magnetosphere. Scott Bolton is Juno’s principal investigator from the Southwest Research Institute in San Antonio. Bolton said in a statement:

One of the most basic questions about Jupiter’s Great Red Spot is: how deep are the roots? Juno data indicate that the solar system’s most famous storm is almost one-and-a-half Earths wide, and has roots that penetrate about 200 miles (300 kilometers) into the planet’s atmosphere.

Jupiter’s Great Red Spot is a giant oval of crimson-colored clouds in Jupiter’s southern hemisphere that race counterclockwise around the oval’s perimeter with wind speeds greater than any storm on Earth. Measuring 10,000 miles (16,000 kilometers) in width as of April 3, 2017, the Great Red Spot is 1.3 times as wide as Earth. This looping animation simulates the motion of clouds the Great Red Spot. Image via NASA/JPL-Caltech/SwRI/MSSS/Gerald Eichstadt/Justin Cowart.

Andy Ingersoll, professor of planetary science at Caltech, is Juno co-investigator. He said in a statement:

Juno found that the Great Red Spot’s roots go 50 to 100 times deeper than Earth’s oceans and are warmer at the base than they are at the top. Winds are associated with differences in temperature, and the warmth of the spot’s base explains the ferocious winds we see at the top of the atmosphere. 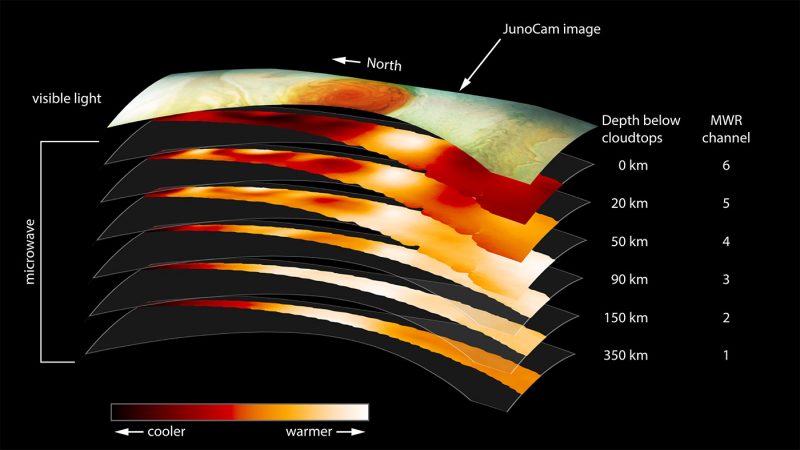 This figure gives a look down into Jupiter’s Great Red Spot, using data from the microwave radiometer instrument onboard NASA’s Juno spacecraft. Each of the instrument’s six channels is sensitive to microwaves from different depths beneath the clouds. Image via NASA/JPL-Caltech/SwRI.

The closer you get to Jupiter, the weirder it gets. We knew the radiation would probably surprise us, but we didn’t think we’d find a new radiation zone that close to the planet. We only found it because Juno’s unique orbit around Jupiter allows it to get really close to the cloud tops during science collection flybys, and we literally flew through it.

Bottom line: Data from NASA’s Juno spacecraft is revealing more about the depth and make-up of Jupiter’s Great Red Spot.