Cassini spacecraft will begin its grand finale at Saturn in 2017. This was one of Cassini’s last close flybys of Saturn’s large moon, Titan.

In 2017, the Cassini spacecraft will begin its dramatic grand finale at Saturn, when it’ll plunge repeatedly between Saturn and its rings. Meanwhile, the spacecraft has been performing a series of “lasts” at Saturn. The video above and several of the radar images on this page are new images, released by NASA on September 7, 2016. They’re from one of the last close flybys of Saturn’s moon Titan, on July 25. They show hundreds of sand dunes as dark lines snaking across the moon’s surface. Cassini radar team members say these dunes display patterns of undulation and divergence around elevated mountains (which appear bright to the radar), thereby showing how wind and sand is blowing on the surface of this haze-shrouded moon.

The July 25 flyby was Cassini’s 122nd encounter with Titan since the spacecraft’s arrival in the Saturn system in mid-2004. It was also the last time Cassini’s radar will image terrain in the far southern latitudes of Titan. The spacecraft came as close as 607 miles (976 km) from Titan’s surface. Stephen Wall, deputy lead of the Cassini radar team at NASA’s Jet Propulsion Laboratory in Pasadena, California, commented in a statement:

If Cassini were orbiting Earth instead of Saturn, this would be like getting our last close view of Australia. 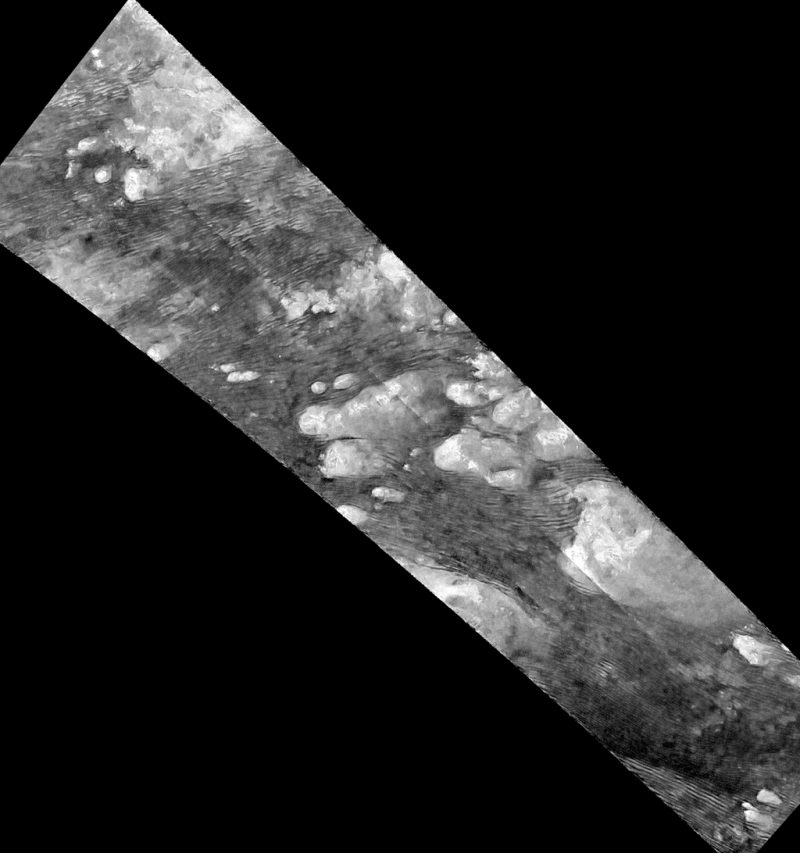 In its 12 years of orbiting Saturn, making observations in and among Saturn’s rings and moon, Cassini has found liquid lakes and seas, but of water, but of liquid methane and ethane. And it has captured hundreds of amazing images of Titan, revealing many wonders, for example, sunglint from Titan’s seas.

And now we have these new images of long, linear dunes, thought to be comprised of grains derived from hydrocarbons that have settled out of Titan’s atmosphere.

Cassini has shown that dunes of this sort encircle most of Titan’s equator.

Scientists said they will use the dunes to learn about winds, the sands they’re composed of, and highs and lows in the landscape. 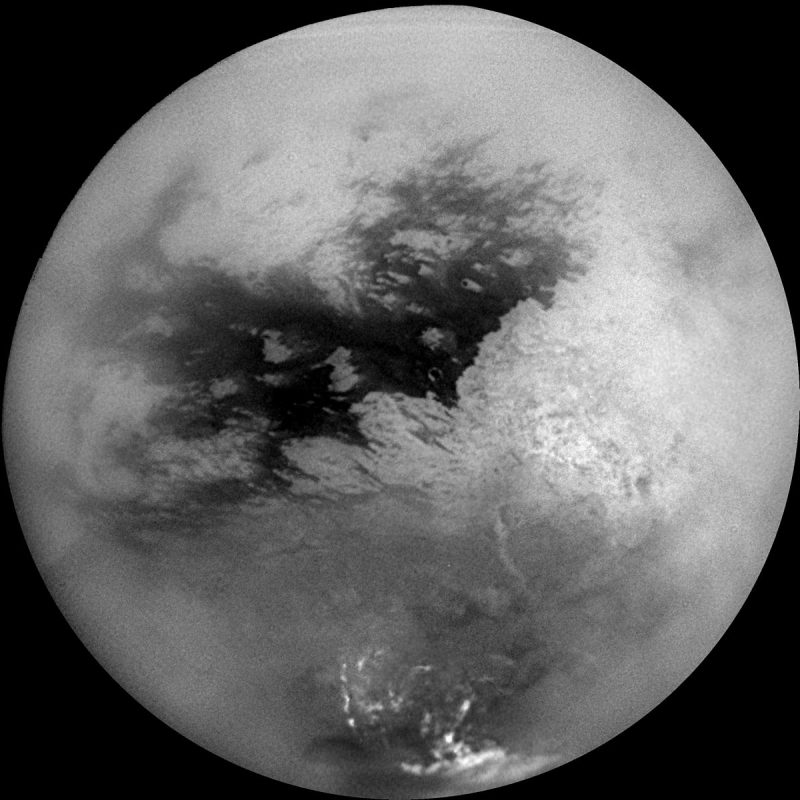 A 2004 full-globe image of Titan, from Cassini. The large Xanadu region is the bright area at the bottom center. Image via NASA/JPL PhotoJournal. 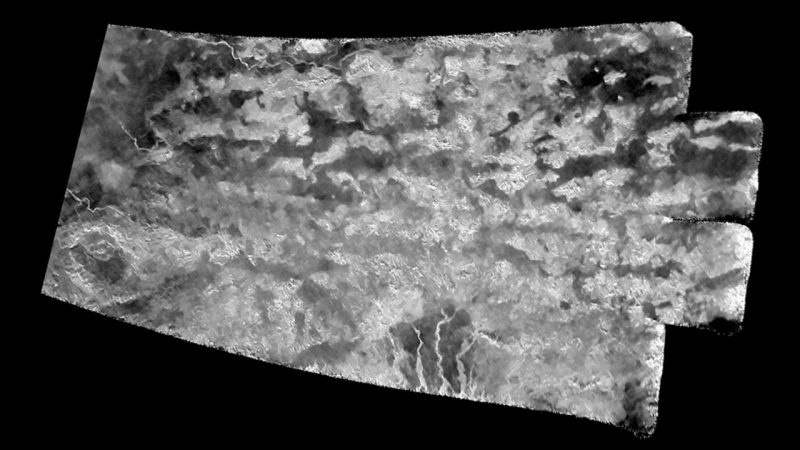 Cassini spacecraft acquired this image on July 25, 2016 during its close pass over Titan’s southern latitudes. It’s close-up of the Xanadu Annex, named for the larger Xanadu region shown in the image above this one. Image via NASA/JPL-Caltech/ASI/Université Paris-Diderot.

The image above shows Xanadu Annex; it’s named after Titan’s larger Xanadu region, an Australia-sized, bright region on Titan, which the Hubble Space Telescope first saw in 1994 and which Cassini caught in more detail beginning in 2004. Cassini’s radar had not previously obtained images of this area, but earlier measurements by the spacecraft suggested the terrain might be quite similar to the larger Xanadu region, which scientists have described as Earth-like in the sense that it has river valleys, hills, plains, and mountains. Rosaly Lopes, a Cassini radar team member at JPL, said of Xanadu Annex:

These mountainous areas appear to be the oldest terrains on Titan, probably remnants of the icy crust before it was covered by organic sediments from the atmosphere. Hiking in these rugged landscapes would likely be similar to hiking in the Badlands of South Dakota.

Cassini’s four remaining Titan flybys will focus primarily on the liquid-filled lakes and seas in Titan’s far north. The mission will begin its finale in April 2017, with a series of 22 orbits that plunge between the planet and its icy rings.

Bottom line: Images from July 25 flyby of Titan by Cassini, which will begin its grand finale in 2017. It was the last time Cassini will image Titan’s far-southern latitudes.