Here’s a newly released color mosaic of Titan – taken in near-infrared part of the spectrum – showing the sun glinting off of Titan’s north polar seas. Beautiful! 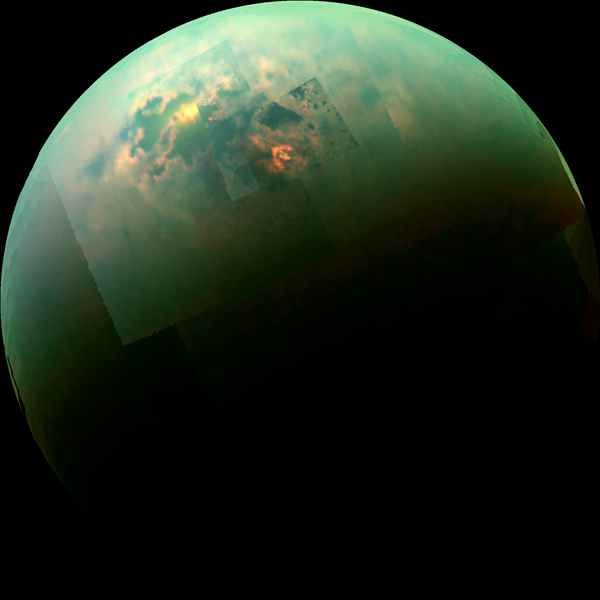 View larger. | The yellow smudge in this image is sunglint from the liquid seas of Saturn’s largest moon Titan. Image via NASA’s Jet Propulsion Laboratory.

Saturn’s largest moon Titan is shrouded in thick clouds, but NASA’s Cassini spacecraft – which has been orbiting Saturn, weaving among its moons, since 2004 – has used special instruments to peer beneath the clouds. Titan turns out to be one of the most fascinating worlds in our solar system, with, among other things, liquid methane and ethane seas on its surface. Here’s a newly released color mosaic of Titan – taken in near-infrared part of the spectrum – showing the sun glinting off of Titan’s north polar seas. The sunglint is the bright area near the 11 o’clock position at upper left. This mirror-like reflection is in the south of Titan’s largest sea, which earthly astronomers have named Kraken Mare, just north of an island archipelago separating two separate parts of the sea.

NASA says this particular sunglint was so bright as to saturate the detector of Cassini’s Visual and Infrared Mapping Spectrometer instrument, which captured the view. It is also the sunglint seen at the highest sun elevation so far. The sun was a full 40 degrees above the horizon as seen from Kraken Mare at this time. NASA also commented:

The southern portion of Kraken Mare (the area surrounding the sunglint, toward upper left) displays a “bathtub ring” — a bright margin of evaporate deposits — which indicates that the sea was larger at some point in the past and has become smaller due to evaporation. The deposits are material left behind after the methane and ethane liquid evaporates, somewhat akin to the saline crust on a salt flat.

The highest resolution data from this flyby — the area seen immediately to the right of the sunglint — cover the labyrinth of channels that connect Kraken Mare to another large sea, Ligeia Mare. Ligeia Mare itself is partially covered in its northern reaches by a bright, arrow-shaped complex of clouds. The clouds are made of liquid methane droplets, and could be actively refilling the lakes with rainfall.

Is it what the human eye would see? No. The view contains real color information, but it’s not the natural color the eye would see. To me, that makes it all the more wonderful that the eyes of our robot spacecraft like Cassini have extended our vision in this way.