How ISS astronauts saw the eclipse

The International Space Station passed 3 times on Monday through the moon’s penumbral shadow. Images of the moon’s shadow on Earth, seen from space, acquired by ISS astronauts. 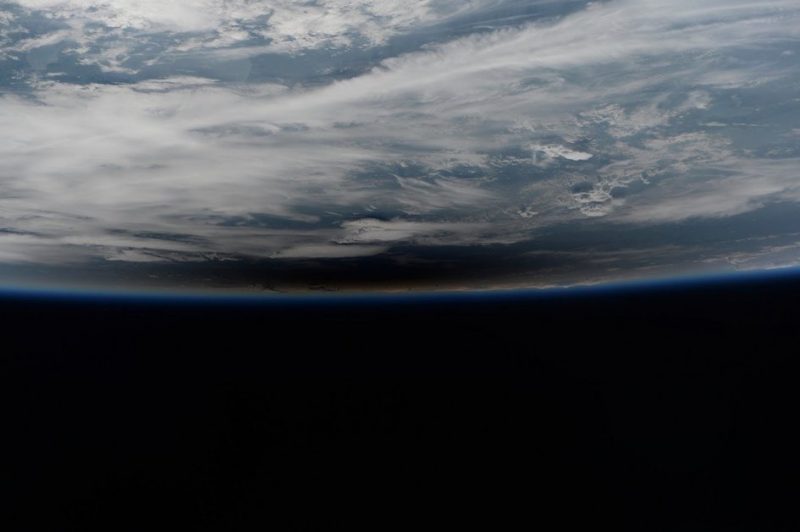 ESA astronaut Paolo Nespoli took this picture during the August 21, 2017 total solar eclipse of the sun, from the International Space Station. It’s the moon’s shadow, sweeping across Earth. Those in the shadow’s path saw the total solar eclipse. Many outside the shadow’s path saw a partial eclipse. From their unique vantage point 250 miles (400 km) above Earth’s surface, astronauts aboard ISS saw the moon’s shadow on Earth’s surface during the eclipse and crossed the path of the eclipse three times on its 90 minute-long orbits around the Earth. Image via ESA/ NASA.

Did the International Space Station (ISS) see a total solar eclipse on August 21, 2017? No. According to NASA’s EclipseScience, during this eclipse, ISS passed through the moon’s penumbral shadow – its lighter, outer shadow – three times. It never passed through the darker, inner portion of the moon’s shadow – called the umbra. Thus ISS astronauts didn’t see a total solar eclipse. Instead, they saw a partial eclipse from their vantage point in space. However, during ISS’s second pass through the moon’s penumbral show, the astronauts did see and capture images of the moon’s shadow on Earth, from the perspective of space. Follow the links below to get more details on how ISS saw the eclipse. 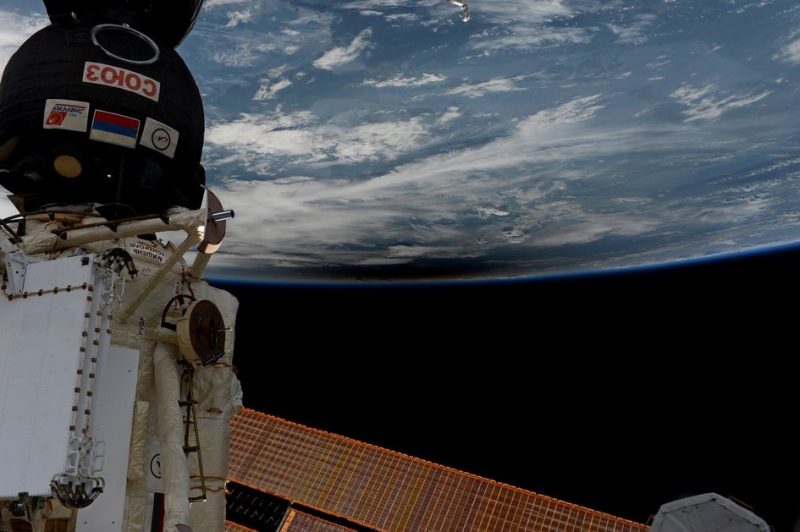 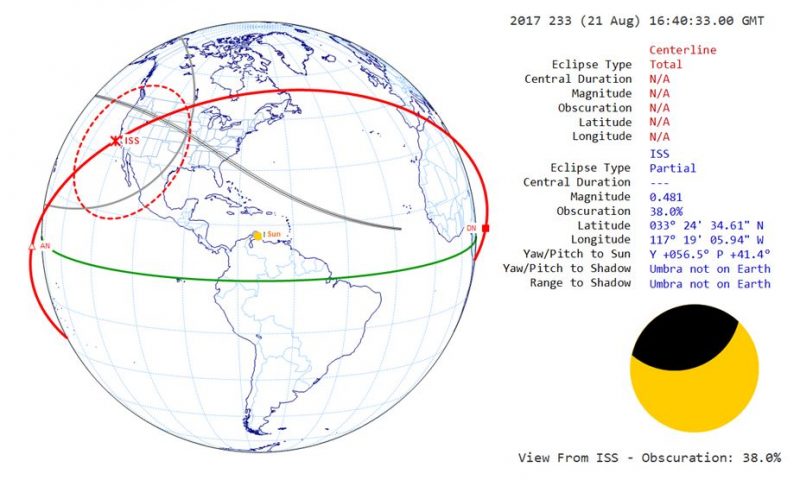 ISS pass #1. A partial eclipse is already in progress and is witnessed by ISS. Image via NASA.

Event times for pass #1, via NASA.

ISS penumbral pass #1. During its first pass through the moon’s penumbra shadow, ISS experienced a partial solar eclipse with 38.0% of the sun covered up at maximum. ISS did not see the moon’s umbra on the Earth’s surface during this pass, or any of the three passes it makes through the moon’s shadow. In pass #1, ISS passed over the western United States and southeastern Canada. At the time of the figure (16:40:33 GMT), the total portion of the eclipse had not yet started for the Earth.

During pass #1, an ISS transit of the sun occurred. In other words, ISS appeared to cross in front of the sun’s face, as seen from a very thin ground track from California through Canada. There’s only one place where you could witness both a transit of the ISS across the partially eclipsed sun and the total solar eclipse later in the morning; it was at the intersection of this transit path with the moon’s shadow path in Wyoming. Click here for a video of the ISS transit across the sun’s face during the eclipse! 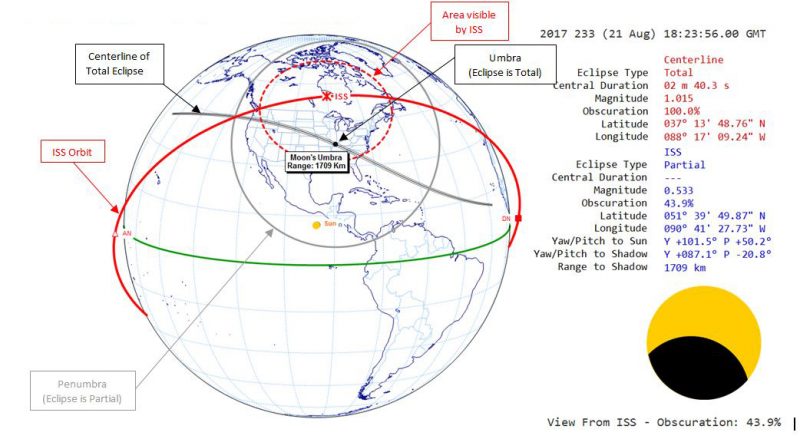 During pass #2, the moon’s park umbral shadow was visible to astronauts aboard ISS. This illustration shows ISS at the mid-point of the eclipse – during this pass – from the perspective of the sun and from a perspective of ISS itself, looking ISS-starboard. Image via NASA.

Event times for pass #2, via NASA.

ISS penumbral pass #2. On the second pass of ISS through the moon’s penumbral shadow, those aboard again experienced a partial solar eclipse. This time, at maximum eclipse, 43.9% of the sun was covered. Also, during this pass, the moon’s dark central umbra – the part of the shadow that causes the total eclipse (seen in the image at the top of this page) – was visible from ISS moving through southern Illinois and southwestern Kentucky. At the time, ISS itself was traversing over southern Canada. At the umbra’s closest approach to ISS, the space station was just south of the Hudson Bay while the moon’s umbral shadow was located in southwestern Kentucky some 1,200 miles (1700 km) away. While ISS did not pass near the location of the moon’s umbra, the moon’s umbra was visible near the horizon. The images at the top of this post are from this pass. 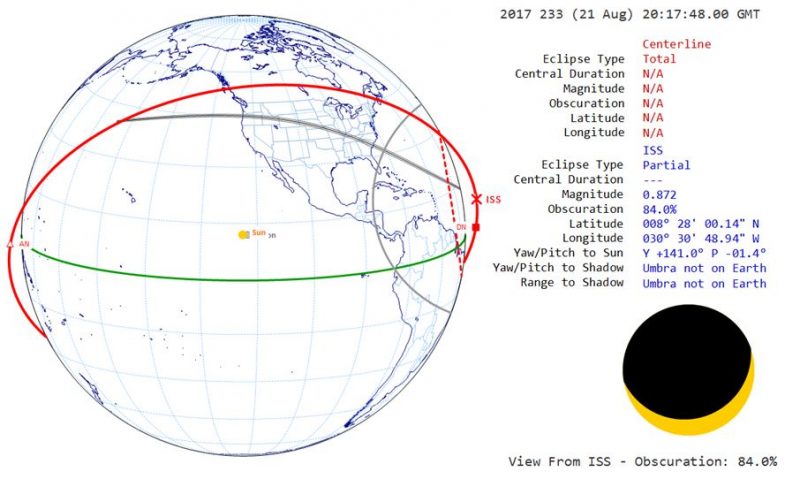 ISS pass #3. This pass provides the deepest partial eclipse as seen from ISS. Image via NASA.

Event times for pass #3, via NASA.

ISS penumbral pass #3. During its third pass through the moon’s penumbral shadow, ISS experienced a partial solar eclipse with 84% of the sun covered up at the maximum point a few minutes prior to orbital sunset. ISS did not see the moon’s umbra on the Earth surface during this pass, since the umbra had just lifted off the Earth’s surface a few minutes prior to the start of ISS’s eclipse on this pass. However, this pass offered the opportunity to see the sun partially eclipsed as it set into the atmosphere with 26.7% of the sun covered by the moon (assuming no structural blockage by ISS itself). We haven’t seen these images yet, but we’re looking. The figure below represents ISS’s location at maximum eclipse, which occurs a few minutes prior to sunset, as viewed from the sun. 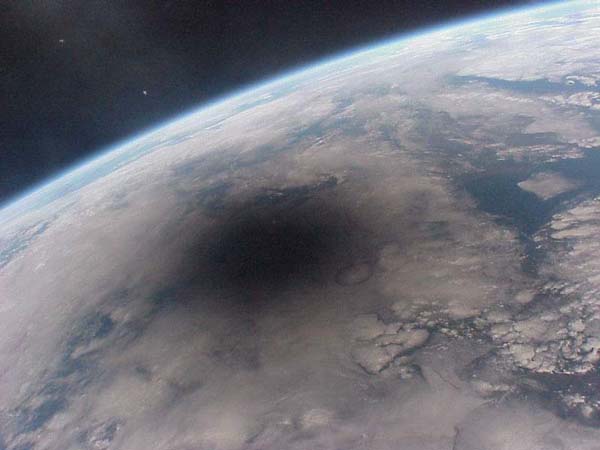 The moon’s shadow on Earth, seen on August 11, 1999 from the Russian Mir space station. Those in the shadow’s path – the path of totality – see a total solar eclipse. Outside the shadow, you might see a partial solar eclipse. Image via Mir 27 Crew/ CNES. This shadow moves across the Earth at some 1,200 miles per hour (nearly 2,000 km per hour). Will the astronauts aboard ISS see it and capture an image on Monday, August 21? 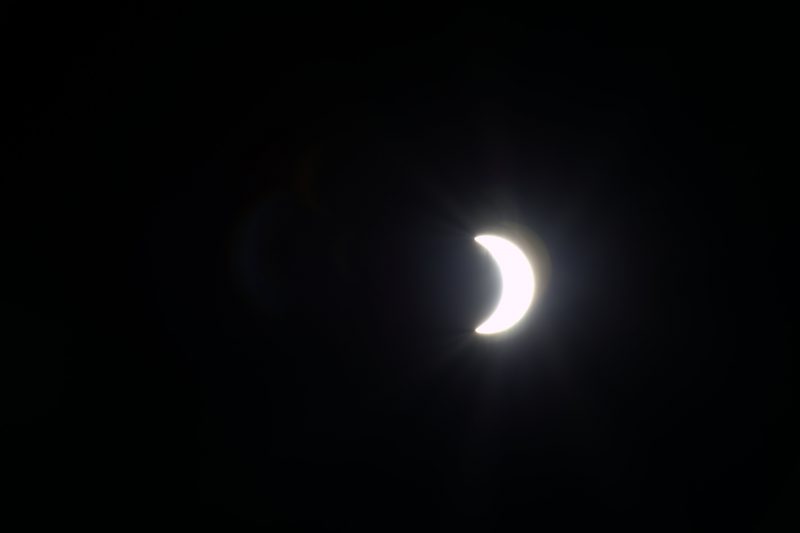 The solar eclipse of March 20, 2015, as captured from aboard the International Space Station by astronaut Samantha Cristoforetti. Check out her series of 21 photos of that eclipse.

Bottom line: A page of information – based on info at NASA’s EclipseScience – that describes three passes of the International Space Station through the moon’s penumbral shadow during the August 21, 2017 total solar eclipse plus images acquired by astronauts aboard ISS of the eclipse.