International Space Station (ISS) astronaut Don Pettit plans to make observations and take photos of the 2012 transit of Venus on June 5-6, 2012 – the last transit of Venus in our lifetimes. NASA says it will be posting the Venus transit photos as soon after the event as possible, and we’ll be posting them here. This great ScienceCast from NASA explains more.

Pettit will be pointing his camera through the side windows of the space station’s cupola, an ESA-built observatory module that provides a wide-angle view of Earth and the cosmos. Its seven windows are used by the crew to operate the station’s robotic arm, coordinate space dockings, and take science-grade photos of the Earth and sky. It’s also a favorite hangout for off-duty astronauts who find the view exhilarating.

What’s the best way to view the transit of Venus safely? 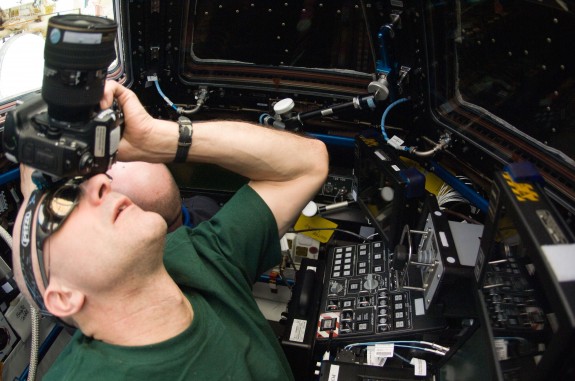 NASA astronaut Don Pettit, Expedition 31 flight engineer, takes pictures out one of Cupola windows on the International Space Station while the crew members were preparing for May 25, 2012 grapple and berthing of the SpaceX Dragon spacecraft. Image Credit: NASA