Sun-observing SOHO spacecraft has caught sight of Venus prior to spectacular transit – last one in our lifetimes – on June 5-6. See the historic photos.

The planet Venus is lost from view for most of us on Earth now, having plunged into the western sunset glare just two days before crossing directly in front of the sun in a spectacular Venus transit – last one in this century – on June 5-6, 2012. A few diligent amateur astronomers might still spot Venus in the west after sunset, but the rest of us won’t see Venus in twilight again until later in June. That’s when the planet will return to the predawn sky. But, as we prepare to see Venus cross the sun’s face, the view from space is getting really exciting now! The sun-observing SOHO spacecraft has Venus in the field of view of its LASCO C3 camera. In the images below, the sun is at the center of the image, hidden behind an occulting disk. Venus is the brighter of two objects to the left of the sun. If there’s a fainter object next to Venus, that’s the planet Mercury. The first image is from June 1. The second image is from June 2. The third image is from June 3 (earlier today). See how Venus is getting closer to the sun from our earthly perspective (which is about the same as SOHO’s).

What’s the best way to view the transit of Venus safely?

How to photograph the transit of Venus 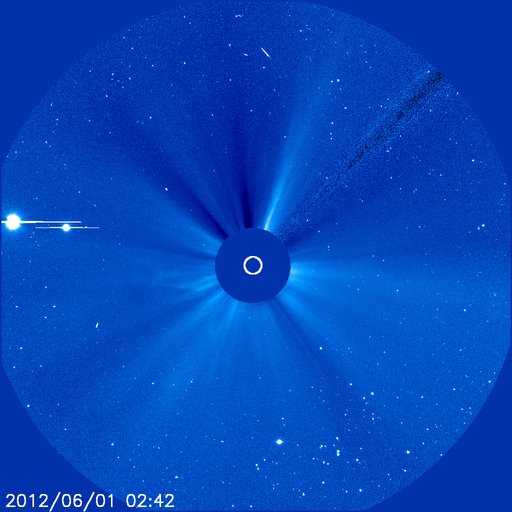 SOHO sun-observing spacecraft view of Venus approaching sun as seen from Earth and spacecraft’s vantage point on June 1, 2012. In this image, the sun is in the center of the field of view, hidden behind an occulting disk. Venus is the brighter object to the left of the sun. Mercury is the fainter object to the sun’s left. These images are from SOHO’s LASCO C3 camera. Image Credit: NASA 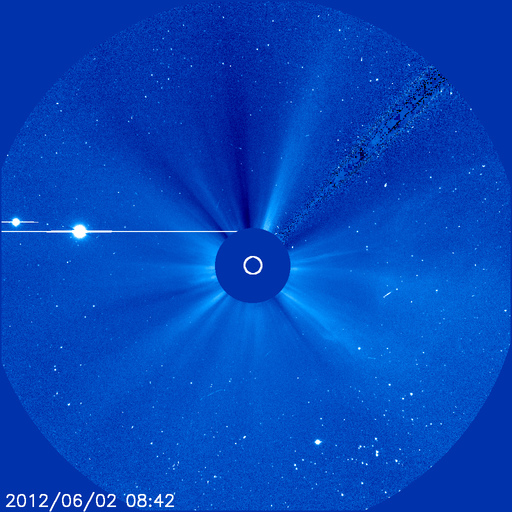 SOHO spacecraft view on June 2, 2012. Sun is in center of field of view, hidden behind occulting disk. Venus is the brighter object to the left of the sun. Mercury is the fainter object to the sun’s left. See the image below to understand the track of Venus from one side of the sun to the other in the coming days. Image Credit: NASA 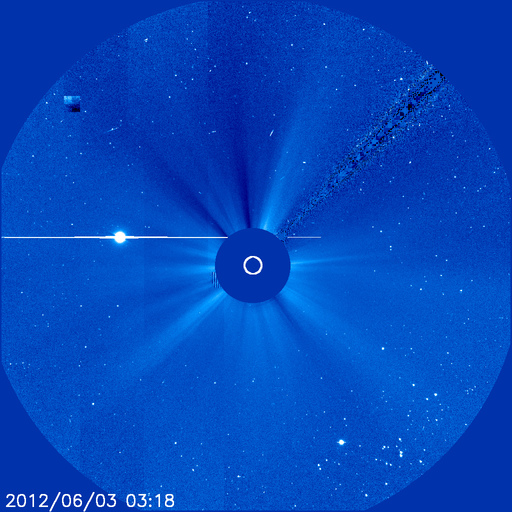 SOHO spacecraft view on June 3, 2012. Sun is in center of field of view, hidden behind occulting disk. Venus is the brighter object to the left of the sun. Getting closer … Image Credit: NASA 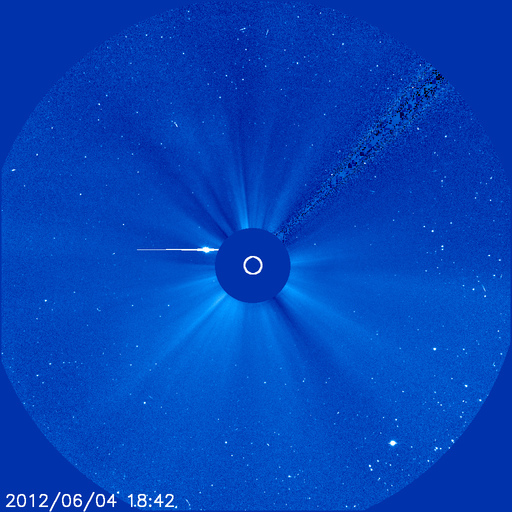 SOHO spacecraft view on June 4, 2012. Venus is nearly behind the occulting disk and on schedule to cross in front of the sun tomorrow. Image Credit: NASA

Check out SOHO’s website for more details about this spacecraft’s views of Venus in the coming days. SOHO will see Venus approach the sun for several days before, and then move away from it for several days after, the transit.

SOHO saw the entire track of Venus before and after the 2004 transit as well, as the image below shows. 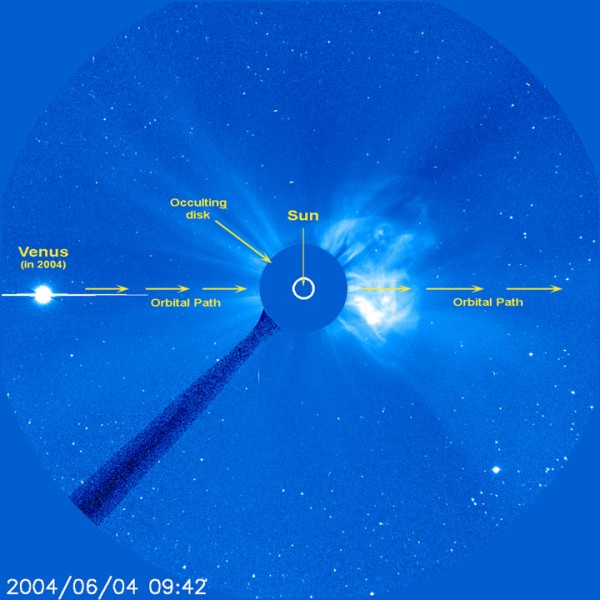 NASA’s SOHO sun-observing spacecraft view of Venus in the days leading up and following the 2004 transit of Venus.Image Credit: NASA

In 2012, Venus first entered the field of view of SOHO’s the LASCO C3 camera on June 1. The planet should pass behind the occulting disk between early June 4 and very late June 7, finally exiting the SOHO field of view late on June 11. As Venus gets closer to the sun, it should enter the narrower, LASCO C2 field of view somewhere near the middle of June 3, disappear behind occulting disk between early June 5 and reappear early June 7, and leave C2’s view of it middle or late on June 8. The actual transit won’t take place as seen from SOHO, however.

Lagrangian points in the sun-Earth system. The sun is the larger yellow ball, and Earth is the smaller blue ball. SOHO is in a halo orbit around the sun-Earth L1 point. Image via Xander89 on Wikimedia Commons.

How does it happen that the SOHO spacecraft view is the same as ours on Earth? This spacecraft is in a halo orbit, moving around the sun-Earth Lagrangian point or L1 point, a point between the Earth and the sun where there is some relative stability, gravitationally, in contrast to other points in space. There are five Lagrangian points in the Earth-sun system, as shown in the image at right. They are the five positions in this system where a small object (like a spacecraft) affected only by gravity can theoretically be stationary relative to the Earth and sun. SOHO actually orbits around the L1 point, so it is not exactly stationary at the point. Still, as Earth moves around the sun, the SOHO spacecraft does, too, with its perspective on the sun staying more or less the same as ours.

Meanwhile, astronaut Don Pettit in the International Space Station is about to become the first human to witness and photograph a transit of Venus from space. His images and commentary will be streamed to Earth during the transit on June 5-6. Read about Pettit’s plans to observe the Venus transit here.

Also, for a space view of the transit, try the Solar Dynamics Observatory (SDO)’s Facebook page.

Transits come in pairs, with over a century between transit pairs. So the last Venus transit wasn’t so long ago: June 8, 2004. The image above shows what SOHO saw of that transit. Before the 2004 and 2012 Venus transits, the last ones were in the late 1800s. The next one won’t be until 2117!

Thanks to EarthSky Facebook friend Mr. Skywatcher for alerting us to these images!

Bottom line: On June 1, 2012, the SOHO’s LASCO C3 camera of NASA’s sun-observing SOHO spacecraft first caught sight of the planet Venus as it prepares to pass in front of the sun in a spectacular Venus transit – last one in our lifetimes. The transit will occur on June 5-6. On June 2, SOHO’s camera has captured another image, showing Venus edging closer. Look here to learn ways to view the transit of Venus.