Have astronomers found another Tabby’s Star?

Remember when astronomers found Tabby’s Star and said they’d never seen anything like it? Now there’s another one … maybe. 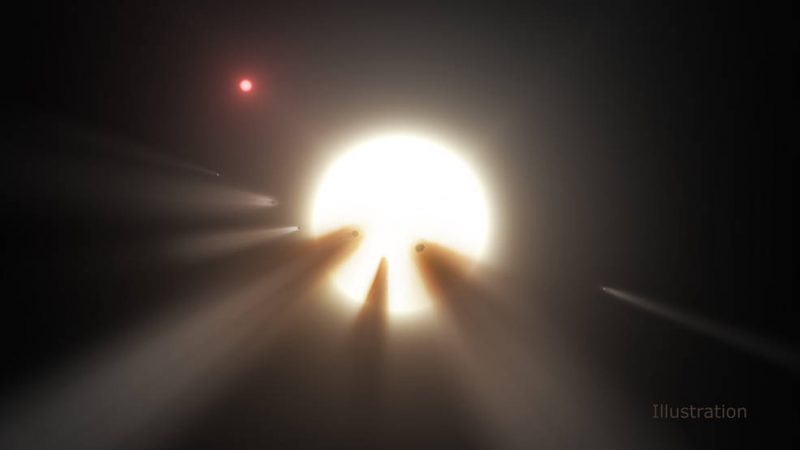 Artist’s concept of Tabby’s Star. It’s possible that dust causes its mysterious dips in brightness, which are similar to those in a newly found star, called VVV-WIT-07. Image via NASA/JPL-Caltech.

Remember Tabby’s Star? It periodically dims in a sporadic and mysterious way. For a while, astronomers thought it might have an alien-built Dyson sphere around it, but now they think not. Astronomers have now found another mysteriously dimming star, perhaps similar to Tabby’s Star!

Tabby’s Star – aka Boyajian’s Star – created a lot of public interest last year and earlier this year when it started to “act up” again, periodically dimming in brightness in ways that astronomers still haven’t fully explained. It even brightened significantly more than usual sometimes. Although astronomers now know that fine dust near Tabby’s Star is at least part of the answer, they don’t yet know where this dust might come from, or why it is behaving the way it does. So the mystery of Tabby’s Star continues.

This month (November 2018), astronomers have been hashing over what may be a newly discovered second star similar to Tabby’s Star. At least, the new-found star displays some similar characteristics. The star – called VVV-WIT-07 (for “What is this?”) – was found by astronomers in Chile using the VISTA telescope in the Atacama Desert. Roberto Saito of the Federal University of Santa Catarina in Florianópolis, Brazil, and his colleagues first reported the star’s odd flickering November 6, 2018, in a peer-reviewed paper on arXiv.org. The findings were then reported in Science News on November 16. As Saito simply put it:

We don’t know what the object is, and that’s interesting. 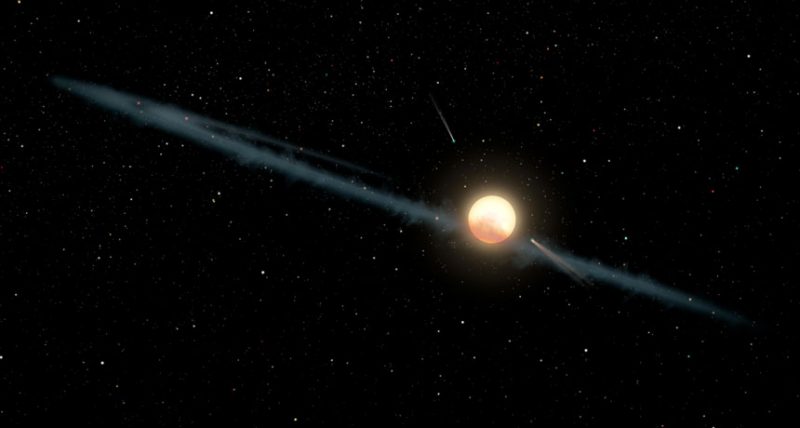 Artist’s concept of VVV-WIT-07, which has been observed dipping in brightness in a manner similar to Tabby’s Star. Image via NASA/JPL-Caltech.

The team wasn’t actually looking for something like VVV-WIT-07, rather they were searching for supernovas – exploding stars – part of a larger survey of the center of the galaxy called the VISTA Variables in the Vía Láctea, or VVV.

If this phenomenon is the same as what’s happening with Tabby’s star, then we can’t invoke an elaborate explanation for what’s happening in both systems. If you’re starting to see stars similar to this all over the place, then it’s got to be a really common thing that happens in nature. That’s really cool.

If other stars could be found which dim in a similar manner, then they may be fairly common.

Astronomers are still not even exactly sure what type of star VVV-WIT-07 is. It lies in the plane of the galaxy from our viewpoint, so there is a lot of dust that partially obscures it. If it’s a young variable star, then the dimming might simply be internal to the star itself. But if it’s not, then it is still a largely open question. As Boyajian noted:

Pretty much everything’s on the table for it right now. We need more data.

There is also another star –  J1407 – that may be an even closer match to Tabby’s Star. that star has been observed to periodically dim by up to a whopping 95 percent. Astronomer Eric Mamajek of the University of Rochester in New York and his colleagues reported the discovery in 2012. Astronomers think that J1407 hosts an orbiting young giant planet or brown dwarf with an enormous ring system – much larger and heavier than Saturn’s – that periodically eclipses the star. 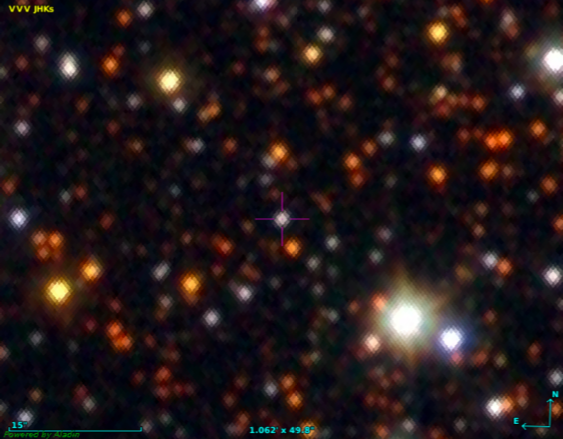 This planet is much larger than Jupiter or Saturn, and its ring system is roughly 200 times larger than Saturn’s rings are today. You could think of it as kind of a super Saturn.

As Matthew Kenworthy at Leiden Observatory in The Netherlands added:

The details that we see in the light curve are incredible. The eclipse lasted for several weeks, but you see rapid changes on time scales of tens of minutes as a result of fine structures in the rings. The star is much too far away to observe the rings directly, but we could make a detailed model based on the rapid brightness variations in the star light passing through the ring system. If we could replace Saturn’s rings with the rings around J1407b, they would be easily visible at night and be many times larger than the full moon. 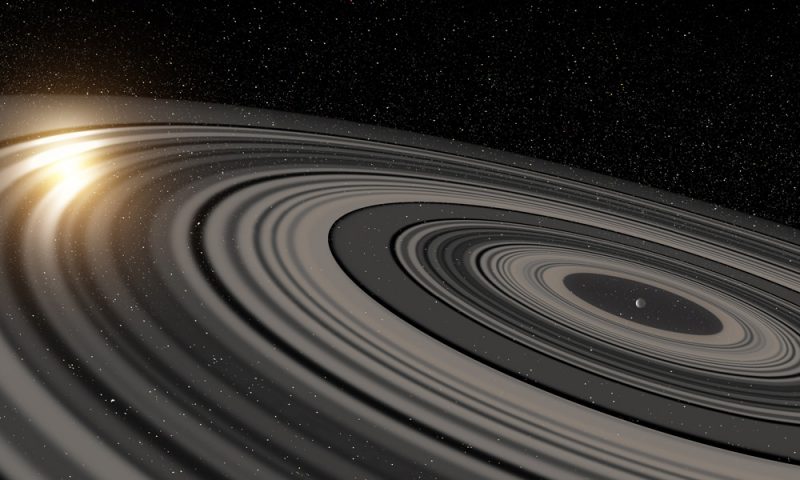 VVV-WIT-07 may also turn out to be more similar to J1407, where a giant young planet or brown dwarf with a gigantic ring system orbits the star. Image via Ron Miller.

Figuring out what is causing the weird dimming of VVV-WIT-07 – as with Tabby’s Star – will require further observations. Saito and his colleagues are hoping to be able to follow up using bigger telescopes, like the twin 8.1-meter Gemini telescopes or the Atacama Large Millimeter Array, both in Chile. Until then, astronomers can mostly just make educated guesses and come up with theories to explain the star’s behavior.

Bottom line: The mystery of Tabby’s Star still hasn’t been solved yet, and now there is another star that seems to be behaving in a similar manner – VVV-WIT-07. The findings made about one of them may help to solve the enigma of both – or it may turn out that there are two different exotic explanations for why these stars suddenly dip in brightness so much. Either way, what we learn about them should be very interesting.