Is this ancient moon rock from Earth?

An intriguing ancient rock found on the moon and brought back by the Apollo 14 mission may actually have originated from Earth, a new study says. 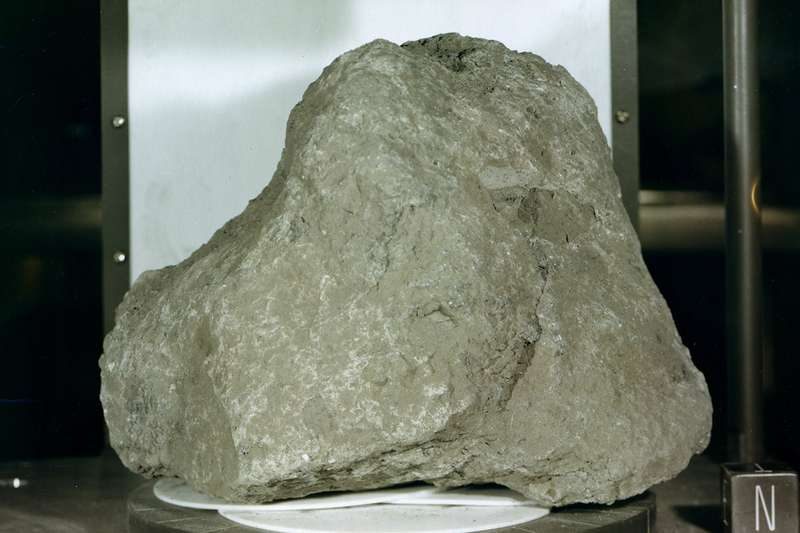 Part of this rock is granite composed of quartz, feldspar, and zircon crystals – all common on Earth but rare on the moon. Did it originate from Earth? Image via NASA.

What would be the best place to look for the oldest known rocks on Earth? Deep underground? The bottom of the ocean? As it turns out, the ideal location might be … the moon! An international team of scientists associated with the Center for Lunar Science and Exploration (CLSE), part of NASA’s Solar System Exploration Research Virtual Institute (SSERVI), have reported the oldest known Earth rock might have been in a sample returned from the moon by Apollo 14. The peer-reviewed discovery has been published in the journal Earth and Planetary Science Letters.

It’s thought that the rock was jettisoned off the Earth by an impacting asteroid or comet, eventually colliding with the moon about 4 billion years ago, during the Hadean eon. At the time, the moon was about three times closer to Earth than it is now, making that even more of a possibility. 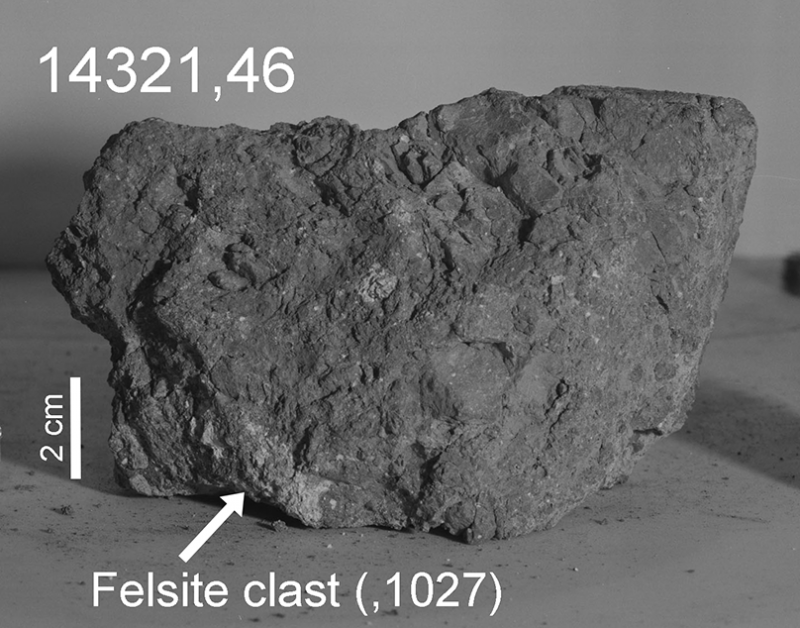 Another view of the moon rock that may have partly come from Earth and impacted on the moon billions of years ago. Image via NASA.

We usually tend to think of meteorites – from the moon or an asteroid – impacting Earth, but the team, led by Research Scientist Jeremy Bellucci and Professor Alexander Nemchin, wanted to try to locate pieces of Earth rocks that had impacted the moon. The team, based at the Swedish Museum of Natural History and Curtin University in Australia, found what they were searching for – a two-gram fragment of granite rock containing quartz, feldspar and zircon crystals – all common on Earth but highly unusual on the moon.

There was other evidence as well. Chemical analysis of the fragment showed that it crystallized in an Earth-like oxidized system, at Earth-like temperatures, rather than in the reducing and higher temperature conditions found on the moon. Analysis showed that it likely crystallized about 12 miles (20 kilometers) beneath the Earth’s surface, 4.0-4.1 billion years ago, and was then excavated by a large meteorite impact. Eventually it impacted the moon. According to CLSE Principal Investigator David A. Kring, a Universities Space Research Association (USRA) scientist at the Lunar and Planetary Institute (LPI):

It is an extraordinary find that helps paint a better picture of early Earth and the bombardment that modified our planet during the dawn of life. 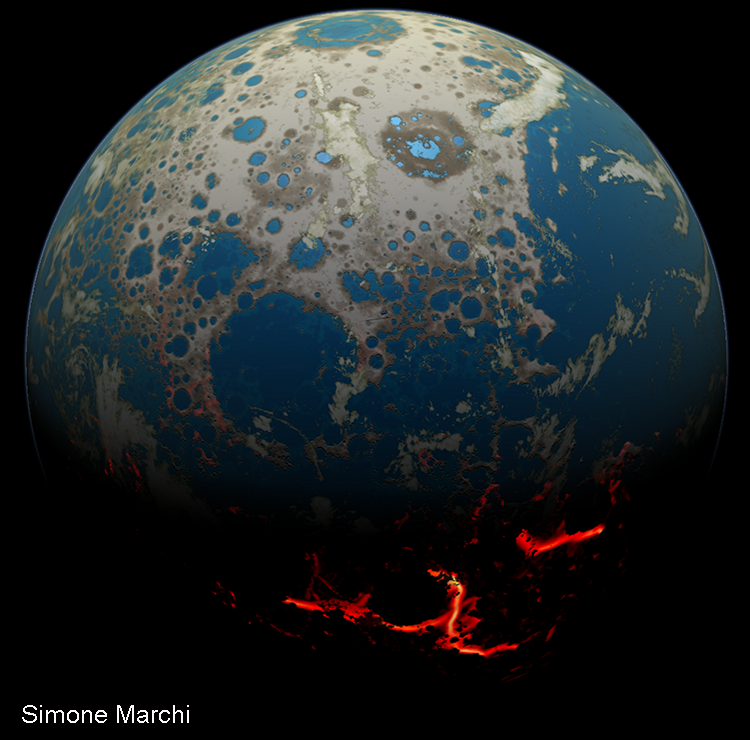 Artist’s concept of the Hadean eon on Earth – between 4.6 and 4 billion years ago, when the rock fragment is thought to have escaped Earth and hit the moon. Image via Simone Marchi.

Is this proof that the fragment came from Earth? Not quite, but it is very compelling. It may have crystallized on the moon, but evidence of the conditions necessary for that have never been found before in any lunar samples returned to Earth. The only known way it could have formed on the moon would be if it originated deep in the moon’s mantle. According to Bellucci:

If it formed on the moon, it must have formed 167 kilometers [104 miles] deep. Even a massive impact on the moon would not be able to dig up rocks from that far down.

Comparison of the distances between Earth and moon now, and during the Hadean eon over 4 billion years ago. Image via LPI/David A. Kring.

If rocks from the moon can be ejected and end up on Earth, then the opposite should be expected to happen as well, as explained by William Bottke at the Southwest Research Institute (SwRI) in Colorado:

Earth’s been hit by a lot of very big things, and it’s conceivable that some of those impacts have ejected material far enough away that it’s been able to escape the clutches of Earth and make it to the moon. What they’ve pointed out is an interesting inconsistency and they’ve pointed out a possible hypothesis, and now we get to figure out whether it holds water or not.

Bottom line: It’s been known for a long time that pieces of the moon can be blasted off the surface during impacts and then later hit the Earth as meteorites. This new study now provides evidence that the opposite can also occur – bits of rock from Earth can also end up on the moon – waiting to be discovered by future human or robot explorers.

Source: Terrestrial-like zircon in a clast from an Apollo 14 breccia