Is a solar flare the same thing as a CME?

Solar Cycle 25 is here, and that means – in the years ahead – more solar flares and more coronal mass ejections, or CMEs. People sometimes use the words interchangeably, but they’re not the same thing. Here’s the difference.

As Solar Cycle 25, which just began, ramps up, we’re going to be hearing more often about solar flares and coronal mass ejections (CMEs). Both are gigantic explosions of energy on the sun. Sometimes solar flares and CMEs happen at the same time; the strongest flares are almost always correlated with CMEs. Both are born when the sun’s magnetic fields explosively realign, driving energy into space. But a solar flare is a brilliant flash of light. A CME is an immense cloud of magnetized particles hurled into space in a particular direction, sometimes toward Earth. As NASA explained:

Solar flares and CMEs … emit different things, they look and travel differently, and they have different effects near planets.

Both eruptions are created when the motion of the sun’s interior contorts its own magnetic fields. Like the sudden release of a twisted rubber band, the magnetic fields explosively realign, driving vast amounts of energy into space. This phenomenon can create a sudden flash of light, a solar flare. Flares can last minutes to hours and they contain tremendous amounts of energy. Traveling at the speed of light, it takes eight minutes for the light from a solar flare to reach Earth. Some of the energy released in the flare also accelerates very high energy particles that can reach Earth in tens of minutes.

The magnetic contortions can also create a different kind of explosion that hurls solar matter into space. These are the coronal mass ejections, also known as CMEs. One can think of the explosions using the physics of a cannon. The flare is like the muzzle flash, which can be seen anywhere in the vicinity. The CME is like the cannonball, propelled forward in a single, preferential direction, this mass ejected from the barrel only affecting a targeted area. This is the CME, an immense cloud of magnetized particles hurled into space. Traveling over a million miles per hour, the hot material called plasma takes up to three days to reach Earth. The differences between the two types of explosions can be seen through solar telescopes, with flares appearing as a bright light and CMEs appearing as enormous fans of gas swelling into space.

EarthSky lunar calendars are guaranteed to sell out – get one while you can!

While most predictions for Solar Cycle 25 have called for an unusually weak cycle (fewer flares, less activity, than at the peak of other solar cycles), a recent study called for an unusually strong cycle (lots of flares and other activity). Time will tell. Here’s an image of the sun on January 6, 2021. You can see it’s blank; no sunspots. According to SpaceWeather.com, the sun has had no visible spots for the past 3 days. But the sun is ramping up in activity and starting to form spots. See photos from EarthSky community members. In 2020, the sun was spotless for a total of 208 days. It’s likely to have fewer spotless days this year. Image via SDO/ HMI/ SpaceWeather.com.

Flares and CMEs have different effects at Earth as well, which explains the high interest in them among members of the public. NASA explained:

The energy from a flare can disrupt the area of the atmosphere through which radio waves travel. This can lead to degradation and, at worst, temporary blackouts in navigation and communications signals.

On the other hand, CMEs can funnel particles into near-Earth space. A CME can jostle Earth’s magnetic fields, creating currents that drive particles down toward Earth’s poles. When these react with oxygen and nitrogen, they help create the aurora, also known as the Northern and Southern Lights. Additionally, the magnetic changes can affect a variety of human technologies. High frequency radio waves can be degraded: Radios transmit static, and GPS coordinates stray by a few yards. The magnetic oscillations can also create electrical currents in utility grids on Earth that can overload electrical systems when power companies are not prepared.

NASA can point to a robust space-based heliophysics fleet – a fleet of solar, heliospheric, geospace, and planetary spacecraft – that operate simultaneously to understand the dynamics of the solar system and are always on the watch for these explosions. That’ll be important in the coming years as Solar Cycle 25 revs up and creates more activity on the sun: more flares and more CMEs. NASA explained:

Much like how we forecast thunderstorms and rain showers, the U.S. National Oceanic and Atmospheric Administration’s Space Weather Prediction Center runs simulations and can make predictions about when the CME will arrive at Earth based on this and other data. They then alert appropriate groups so that power companies, airlines, and other stakeholders can take precautions in the event of a solar storm. For example, if a strong CME is on its way, utility companies can redirect power loads to protect the grids. 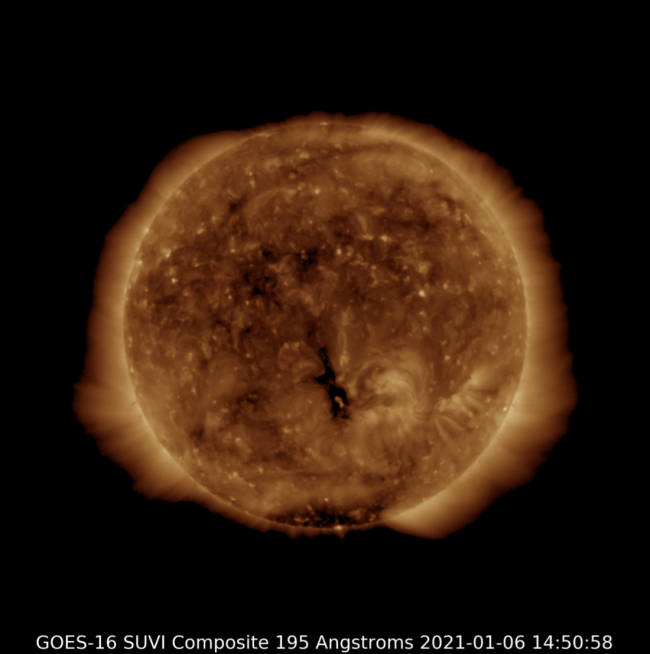 Here’s another image of the sun on January 6, 2021, via NOAA’s Space Weather Prediction Center. If you go to that page, you can get lots of up-to-date info on what the sun is doing today.

Bottom line: Both solar flares and coronal mass ejections (CMEs) are born when the sun’s magnetic fields explosively realign, driving vast amounts of energy into space. A solar flare is a brilliant flash of light. A CME is an immense cloud of magnetized particles hurled into space in a particular direction, sometimes toward Earth.