Solar storms pose risks for society, but more accurate space weather forecasts appear to be coming soon. A team of researchers in Japan has developed a physics-based method for predicting large solar flares, including powerful and potentially dangerous X-flares. 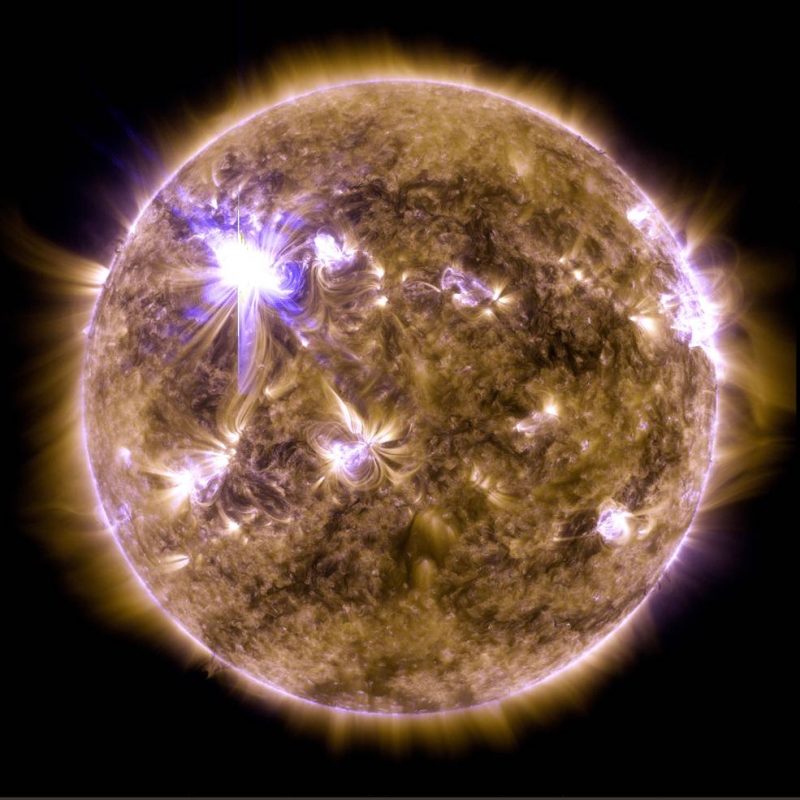 In the upper left, you see an X-class solar flare at the edge of the sun on March 7, 2012, captured when the sun was still rising to the peak of the last 11-year solar cycle (Cycle 24). X-flares like this one have the potential to send streams of charged particles toward Earth, which can disrupt earthly technologies. Image via NASA’s Goddard Space Flight Center/ NASA’s Solar Dynamics Observatory (SDO).

This past summer, solar physicist Kanya Kusano of Japan, and his colleagues, published a new paper in the prestigious journal Science, outlining a new method for predicting potentially dangerous solar flares. The method isn’t perfect; tests using solar observations acquired in 2008 to 2019 resulted in some false negatives and false positives. Yet, impressively, the method successfully predicted seven out of nine of the biggest X-class flares – the most powerful kind of solar flares – from the last solar cycle. The method also provided the exact location where each flare would begin and set limits on how powerful it would be. Graham Jones – who is based in Japan – had an opportunity to interview Kanya Kusano about this work. His interview is below.

About solar flares. They are brief eruptions of intense high-energy radiation from the sun’s surface. They’re associated with sunspots, coronal mass ejections and other signs of high activity on the sun during its 11-year cycle. The current cycle – Cycle 25 – has now begun, scientists say. Activity on the sun creates what’s known as space weather. Accurate forecasts of space weather are important, because a big solar flare hurtle charged particles toward Earth and cause outages in our electrical power grids and disturbances of satellites in orbit.

Understanding when and why these powerful solar flares happen has been a difficult challenge in astrophysics. Much of the work has been on theoretical mathematical models, as scientists have tried to understand the exact physics behind solar flares and their resulting coronal mass ejections. All this work has the ultimate goal of predicting storms on the sun.

What sets Kusano’s team’s method apart is that it’s physical, rather than being based on models. In other words, these scientists used NASA’s Solar Dynamics Observatory (SDO) data to make a 3-D picture – a magnetic map – of the sun.

Their approach opens a new direction for solar flare prediction research. Kusano spoke about about their work below. 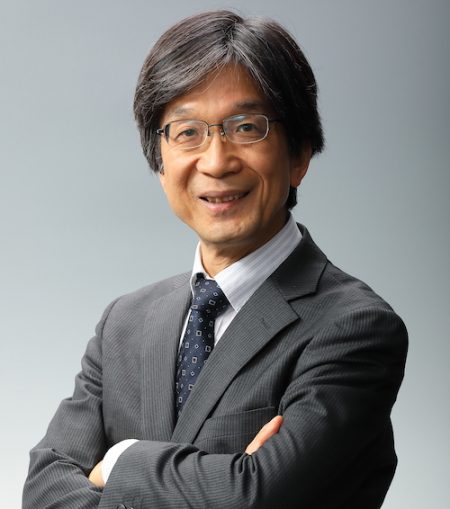 Kanya Kusano is director of the Institute for Space-Earth Environmental Research at Nagoya University. He and his team have developed a physics-based model to predict imminent large solar flares. Image via Nagoya University.

Jones: What is the Institute for Space-Earth Environmental Research, and what’s your role?

Kusano: The human environment is so extended, it even spreads into space. Our institute was established in 2015 to combine space science and Earth science. My background is in astrophysics, but I used to work for the Japan Agency for Marine-Earth Science and Technology, where I developed simulations of clouds and rainfall. I’m a theoretician, but I always try to apply theory to some kind of practical benefit. Space weather forecasting is a field where basic science and practical application should be combined.

Jones: What is a solar flare, and why do scientists study them?

Kusano: A solar flare a kind of explosion on the sun. The driving force is the energy stored in the sun’s magnetic field. This magnetic energy builds up slowly over a very long time, which then is suddenly released as radiation and high-energy particles.

It’s just like an avalanche on a mountain: the snow accumulates over many days until the gravitational energy is released in an avalanche.

The first reason we want to study these flares on the sun is that phenomena that occur suddenly are very interesting science subjects. What determines the onset of an explosion? A typhoon, which grows quickly from a low pressure system, is another example of an explosion in an atmospheric system.

The second reason is to protect our society. The distribution of solar flares is similar to earthquakes: we have many small solar flares, and a big one is very rare. However, when a big flare occurs, the impact on our economy and society may be enormous. Satellites may be damaged, and the electrical power grid may be damaged over a very wide area.

The only way to mitigate such kind of impact is with prediction.

Jones: Why has it taken so long to come up with a way to predict solar flares?

Kusano: Solar flares were discovered in 1859 by Richard Carrington, a British astronomer. People studied them for more than 100 years.

But in the last two or three decades, our knowledge has improved enormously because of very high resolution observations by satellite. We now understand that a solar flare is an explosion of magnetic energy.

However, what determines when the solar flare occurs? That is still a mysterious problem.

Jones: How are you solving this problem?

Kusano: NASA’s Solar Dynamics Observatory (SDO) satellite provides magnetic data on the solar surface. It is impossible to directly observe the magnetic field in three dimensions, so we have developed software which can calculate the three-dimensional field from the surface data. Then we combine this with theory. Instability of the magnetic field is triggered by magnetic reconnection, where the field lines swap around. If we can find some position where a small amount of magnetic reconnection could trigger instability, then we can predict that a big flare should start from there. It is similar to that avalanche. If you have thick snow on a mountain, theory can tell us how small a crack could trigger an avalanche at any position.

View the sun now, via SDO

Jones: Your latest paper is a proof of concept. How long will it be before you can start making forecasts of solar flares on a regular basis?

Kusano: Currently our scheme requires a big, heavy calculation. We use a supercomputer here in Japan. However, in order to produce one prediction, more than three hours of computation is required. It also takes more than several hours to get the SDO satellite data. In order to make our method work for creating practical, operational forecasts of solar flares we have to accelerate the data acquisition and computation.

I believe that within a couple of years we can make some kind of operational forecast using our scheme.

Jones: Many people worry about another large solar flare happening in a way that would affect our technologies on Earth – another event like the Carrington Event, the largest space super-storm in recorded history – which took place in 1859 before the advent of the electrical grids and Earth-orbiting satellites that are so susceptible to these events. Do you worry about a big solar flare happening?

There are many such kinds of risks we should be concerned about in our society. And maybe science is the only way to think about them. 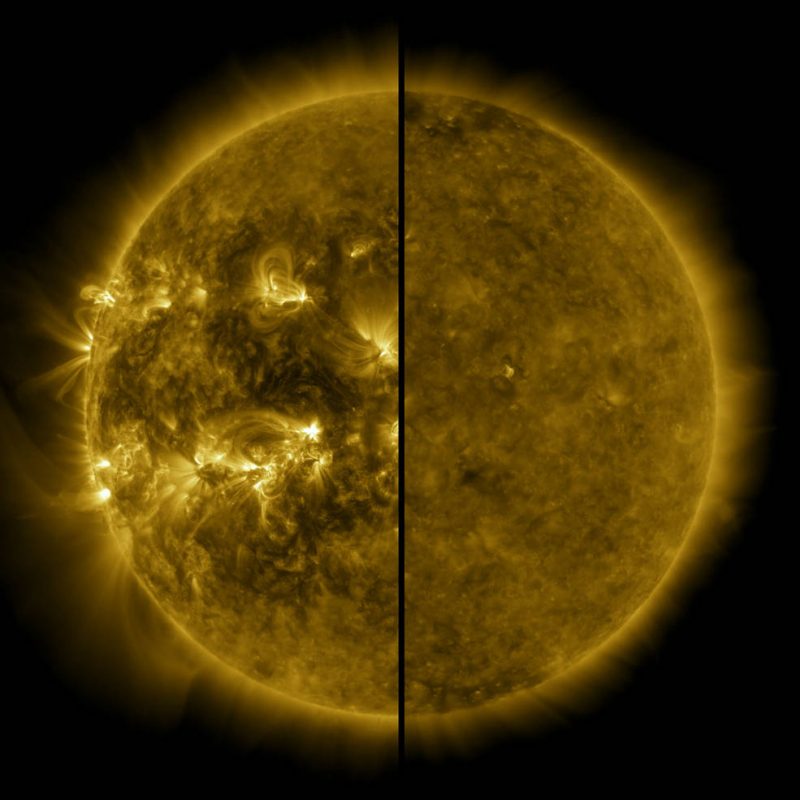 The sun’s activity runs on a roughly 11-year cycle, moving regularly from its most quiet period – solar minimum – to its most active – solar maximum – and back to quiet. This split image shows the difference between an active sun during solar maximum (on the left, captured in April 2014) and a quiet sun during solar minimum (on the right, captured in December 2019). December 2019 marks the beginning of Solar Cycle 25, and the sun’s activity will once again ramp up until solar maximum, predicted for 2025. Image via NASA/ Solar Dynamics Observatory.

Bottom line: A team of researchers in Japan has developed a physics-based method for predicting large solar flares, including powerful and potentially dangerous X-flares. These flares on the sun – and their resulting coronal mass ejections – pose risks for earthly technologies. Accurate prediction of the flares has been a challenge, but this new method seems to offer a leap forward in creating more accurate forecasts of space weather.

Read more: We can now predict dangerous solar flares a day before they happen

Read more: How likely is another Carrington Event?