This video and audio illustrate a seismic event detected by NASA’s InSight lander on April 6, 2019. You can hear 3 distinct kinds of sounds, all of them detected as ground vibrations by the spacecraft’s seismometer, There’s noise from Martian wind; the seismic event itself; and the spacecraft’s robotic arm as it moves to take pictures.

On April 6, 2019, NASA’s Mars InSight lander made the first-ever audio recording of a likely “marsquake.” It’s the first recorded trembling that appears to have come from inside Mars, rather than made by forces above the surface, such as wind. Scientists still are examining the data, NASA said, to determine the exact cause of the signal.

Quakes here on Earth happen when moving pieces of the Earth’s crust, called tectonic plates, slip past one another on faults. Mars and the moon don’t have tectonic plates, but they still experience quakes. So-called marsquakes and moonquakes are caused by a continual process of cooling and contraction that creates stress. This stress builds over time, until it is strong enough to break the crust, causing a quake.

Compared to Earth, the Martian surface is extremely quiet, allowing the InSight lander’s seismometer – called SEIS – to pick up faint rumbles. An event of the same size in Southern California, said NASA, would be lost among the dozens of tiny crackles that occur every day.

The [April 6] Martian event is exciting because its size and longer duration fit the profile of moonquakes detected on the lunar surface during the Apollo missions.

NASA’s Apollo astronauts installed five seismometers on the moon that measured thousands of quakes between 1969 and 1977, revealing seismic activity on the moon.

InSight placed its seismometer on the planet’s surface on December 19, 2018. It has detected three other seismic signals, on March 14, April 10, and April 11, 2019. These signals were even smaller than the event on April 6 (the lander’s 128th Martian day, or sol) and more ambiguous in origin. NASA said the team will continue to study these events to try to determine their cause. 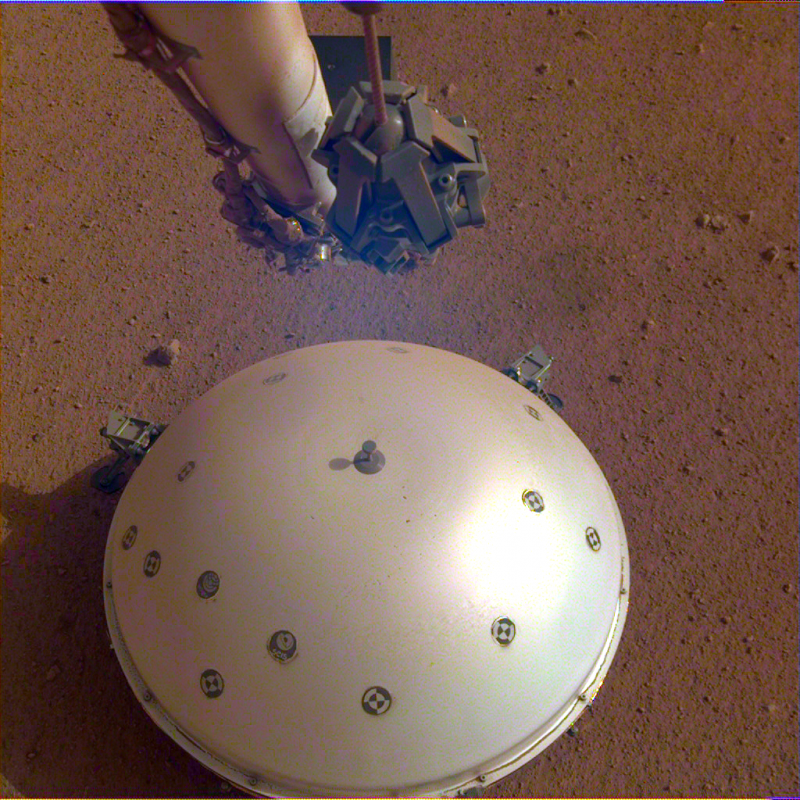 Detecting the tiny Martian quakes required a huge feat of engineering. On Earth, high-quality seismometers often are sealed in underground vaults to isolate them from changes in temperature and weather. InSight’s instrument has several ingenious insulating barriers, including this cover, called the Wind and Thermal Shield, to protect it from the planet’s extreme temperature changes and high winds. This image was taken March 19, 2019, by a camera on NASA’s Mars InSight lander. Image via NASA/JPL-Caltech.

InSight’s first readings carry on the science that began with NASA’s Apollo missions. We’ve been collecting background noise up until now, but this first event officially kicks off a new field: Martian seismology!

Mars, I hear you. I’ve detected some quiet but distinct shaking on #Mars. The faint rumbles appear to have come from the inside of the planet, and are still being studied by my team. Take a listen.?https://t.co/GxR1xdRx1F pic.twitter.com/Z8Hn03jigO