The Vikram lander was to have made India the 4th nation of Earth to soft land on the moon. Contact with it was lost just 1.3 miles (2.1 km) above the moon’s surface. 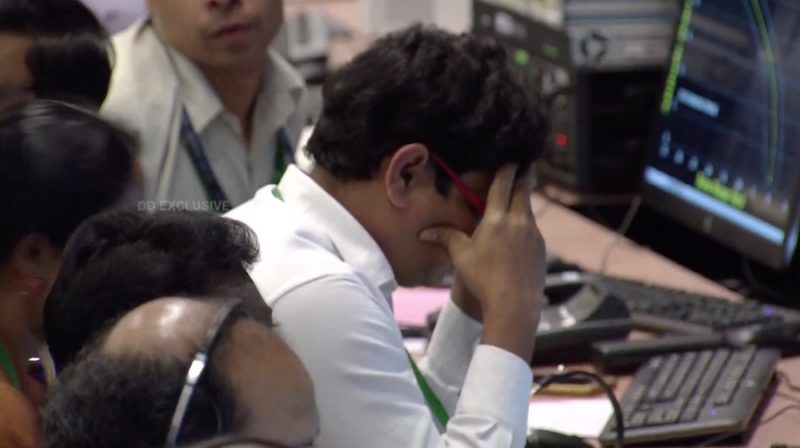 A Chandrayaan-2 team member reacts, after contact with the Vikram lander is apparently lost moments before its scheduled touchdown on the moon the morning of September 7, 2019. Image via ISRO.

India’s Chandrayaan-2 moon orbiter released a lander to the lunar surface on the morning of September 7, 2019 (September 6, according to clocks in the Americas), but contact with the lander has apparently been lost. The lander was in the final stages of a 15-minute powered descent to the moon’s surface when contact with it abruptly broke off. The craft was just 1.3 miles (2.1 km) above the lunar surface at the time. At this point, no one knows the fate of the craft; it’s possible that it crashed. Although, at this writing, no official statement about the loss has yet been placed on Chandrayaan-2’s update page by the Indian Space Research Organization (ISRO), statements from India’s prime minister suggest the landing has failed. K. Sivan, ISRO’s chairman, said:

The Vikram lander descent was as planned, and normal performance was observed up to an altitude of 2.1 kilometers (1.3 miles). Subsequently, the communications from the lander to the ground station was lost. The data are being analyzed.

India’s prime minister Narendra Modi was observing Vikram’s landing attempt from a gallery overlooking the Chandrayaan 2 control center in Bengaluru. After contact with the lander was lost, Modi visited ISRO teams, telling them to “be courageous.” He later said that “India’s space program will bounce back strong” from this apparent setback.

Modi also met with K. Sivan soon after contact was lost and was seen, in videos, to comfort him.

If, on the other hand, Vikram has not crashed – if contact is regained – it would make India the fourth nation on Earth to achieve a soft landing on the moon, after the former Soviet Union, the United States and China.

As reported by SpaceFlight Now:

‘We came very close, but we will need to cover more ground in the times to come,’ Modi said. ‘Every Indian is filled with a spirit of pride as well as confidence. We are proud of our space program and scientists. Their hard work and determination has ensured a better life, not only for our citizens, but also for other nations … India is suffering, but there will be many more opportunities to be proud and rejoice.

‘When it comes to our space program, the best is yet to come,’ Modi continued. ‘There are new frontiers to discover and new places to go … To our scientists, I want to say India is with you.’

India’s landing attempt Friday was the third try to put a spacecraft on the moon’s surface this year. Before Beresheet’s failed landing in April, China successfully landed the Chang’e 4 spacecraft on the far side of the moon in January.

The Vikram lander is named for Vikram Sarabhai, often called “the father of India’s space program.”

This is Mission Control Centre. #VikramLander descent was as planned and normal performance was observed up to an altitude of 2.1 km. Subsequently, communication from Lander to the ground stations was lost. Data is being analyzed.#ISRO