How soon will we see the black hole at the Milky Way’s heart?

An international consortium has been striving to obtain an image of the “shadow” of the event horizon of our Milky Way’s central supermassive black hole. Here’s an update.

A simulation of our Milky Way’s central black hole via Bronzwaer/Davelaar/Moscibrodzka/Falcke/Radboud University. Want to see the best of the real images so far? Look at the next pictures down from this one.

In this century, astronomers have come to feel certain that our Milky Way galaxy – like most galaxies observed in the distant universe – has a supermassive black hole at its heart. They believe this black hole is as massive as 4 million of our suns. They call the black hole Sagittarius A* (aka Sgr A*, pronounced Sagittarius A-star). Since late 2017, some astronomers have been saying we’re less than a year away from seeing the first-ever direct image of it. They expected that image in 2018, but, it appears a foggy cloud of hot gas obscures the view, and has prevented astronomers from getting the sharp images they’d hoped for.

Still, astronomers’ recent efforts – aimed at our galaxy’s heart – have provided insights. This week (January 21, 2019), they reported that, for the first time, they incorporated the ALMA telescope in northern Chile into a global network of radio telescopes to learn that the emission from Sgr A* comes from a smaller region than previously thought.

The new work may indicate that a radio jet from Sgr A* is pointed almost directly toward us. 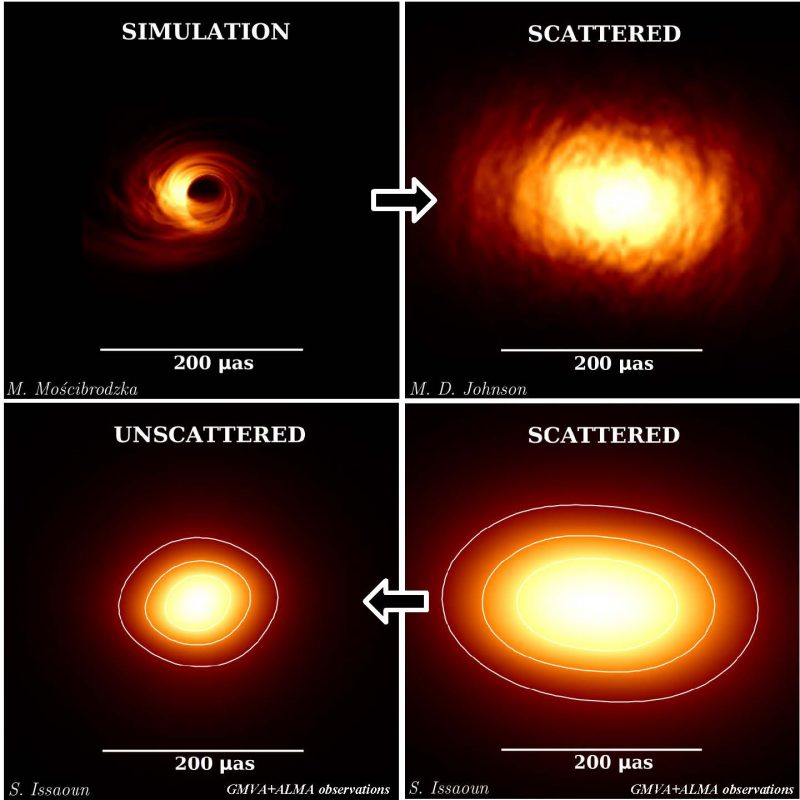 The bottom right image shows Sgr A* as seen in the data. It’s probably the best image we have so far of the black hole at our Milky Way’s heart. The top images are simulations, while the bottom left is Sgr A* with “scattering” removed. Image via NOVA.

Sara Issaoun led the research, which is published in the peer-reviewed Astrophysical Journal. She is part of an international team that calls itself the Event Horizon Telescope consortium, an international partnership of 13 institutes from 10 countries (Germany, the Netherlands, France, Spain, the U.S., Mexico, Japan, Taiwan, Canada and China).

It’s the goal of this team to make the first-ever image of Sgr A*, although, as most of us understand, black holes are truly black. They’re regions containing so much mass squeezed into so little space – regions of such powerful gravity – that no information or light or anything can escape, even if moving at the fastest speed known to exist in our universe, the speed of light.

So how can they obtain an image? 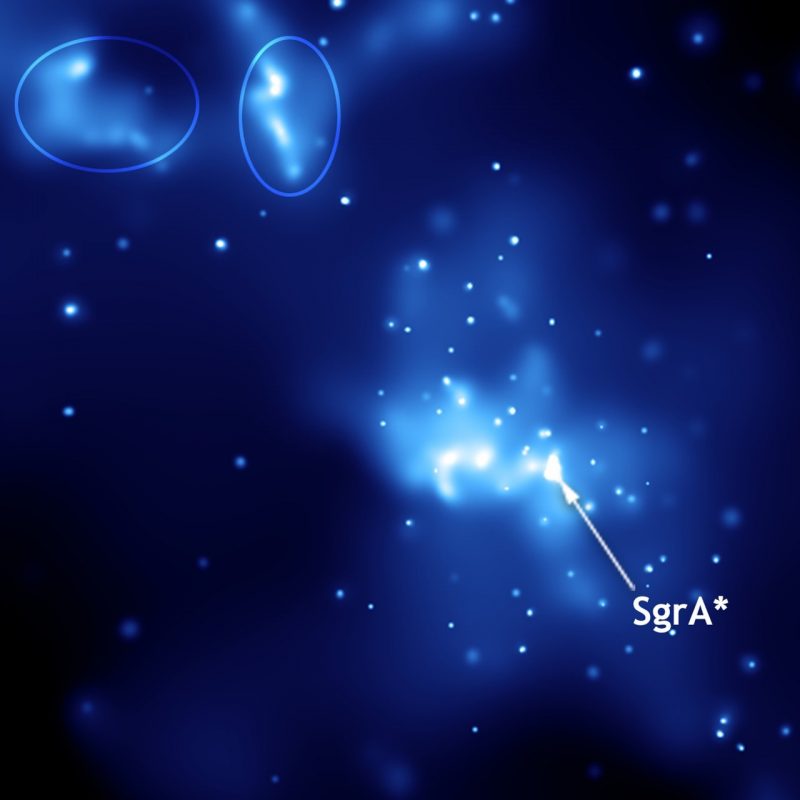 Here’s what astronomers see when they look in the direction of the galaxy’s center with NASA’s Chandra X-Ray Observatory. Sagittarius A* is in this image, but, so far, hot gas has obscured our view of the supermassive black hole’s event horizon. Ellipses indicate light echoes. Image via ESO.

The answer is that astronomers with the Event Horizon Telescope aren’t aiming to capture the black nothingness of a black hole itself (that’s not possible), but instead a black hole’s event horizon, the one-way membrane around a black hole that defines its boundary, through which light can enter, but never leave.

They say they expect the image to reveal the “shadow” of Sgr A*’s event horizon.

Sara Issaoun has been testing several different computer models of supermassive black holes against the data obtained so far. She said it’s possible the data indicate:

… that the radio emission is produced in a disk of infalling gas rather than by a radio jet.

However, that would make Sgr A* an exception compared to other radio emitting black holes. The alternative could be that the radio jet is pointing almost at us. 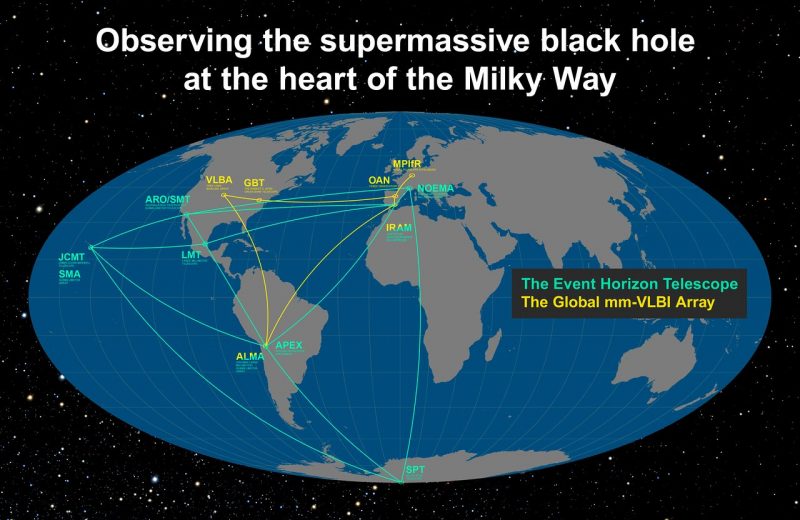 This infographic details the locations of the participating telescopes of the Event Horizon Telescope and the Global mm-VLBI Array. Their goal is to image, for the first time, the shadow of the event horizon of the supermassive black hole at the Milky Way’s heart. Image via ESO.

Issaoun’s supervisor is Heino Falcke at Radboud University in the Netherlands. He said a jet from Sgr A* – pointing directly toward Earth – would be “very unusual.” After all, astronomers never like to assume Earth is in any special place in the universe. However, he also no longer rules out this configuration, saying:

Maybe this is true after all, and we are looking at this beast from a very special vantage point.

Sgr A* is best seen from Earth’s Southern Hemisphere. So the participation of ALMA in Chile was an important addition to this project, not only because ALMA is a relatively new, powerful and very sensitive telescope, but also because of its location. 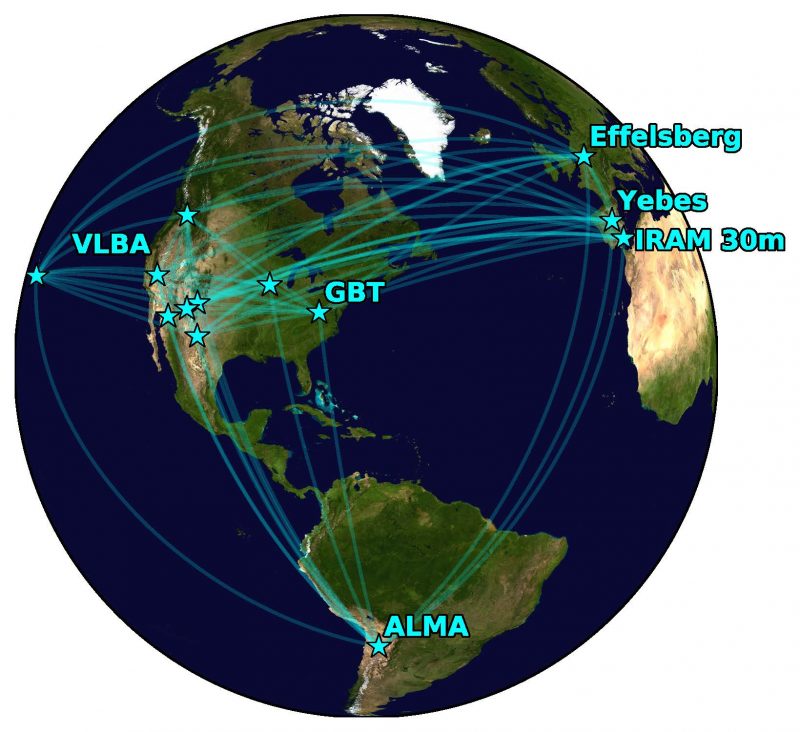 The Global mm-VLBI Array, joined by ALMA. The inclusion of ALMA let astronomers determine that Sgr A* occupies a region of space smaller than previously thought and that a jet from this black hole might be pointing in Earth’s direction. Image via NOVA.

In addition to ALMA, 12 telescopes in North America and Europe also participated in the network. The astronomers said the resolution achieved – that is, the sharpness of the image – was twice as good as in previous observations at this frequency and:

… produced the first image of Sgr A* that is completely free of interstellar scattering (an effect caused by density irregularities in the ionized material along the line of sight between Sgr A* and the Earth).

To remove the scattering and obtain the image, the team used a technique developed by Michael Johnson of the Harvard-Smithsonian Center for Astrophysics (CfA). He commented:

Even though scattering blurs and distorts the image of Sgr A*, the incredible resolution of these observations allowed us to pin down the exact properties of the scattering.

We could then remove most of the effects from scattering and begin to see what things look like near the black hole. The great news is that these observations show that scattering will not prevent the Event Horizon Telescope from seeing a black hole shadow … if there’s one to be seen.

Read more about this research from www.Astronomie.nl

Can’t get enough of this topic? The video below from Vox.com came out over a year ago, and is excellent!

Bottom line: An international consortium has been striving to obtain an image of the “shadow” of the event horizon of our Milky Way’s central supermassive black hole, Sgr A*. They haven’t done it yet, but recent observations show that Sgr A* occupies a smaller region of space than previously thought and that a jet from this black hole might point toward Earth.

Check it out! EarthSky moon calendar for 2019