This was the most popular post at EarthSky this week, and no wonder. It’s exciting! Scientists expect the 1st-ever direct image of a black hole’s event horizon, soon.

In late 2017, scientists with the Event Horizon Telescope – an international collaboration that’s created a virtual Earth-sized telescope, with the goal of capturing the first direct image of a black hole – reported on a the long-awaited shipment of hard disk drives from the South Pole. They said they were busily analyzing the data on these drives, which is expected to be a key component in giving us the first-ever direct image of a black hole sometime in 2018. An article at news.com.au reported:

The data is in. The numbers are being crunched.

The Vox.com video above explains that nearly all images we see of black holes are artist’s illustrations. The ones that aren’t illustrations show, at best, the effects of black holes on the space around them – for example, stars in tightly bound orbits, gas heated to high temperatures, or relativistic jets.

So what are scientists with the Event Horizon Telescope expecting to see? 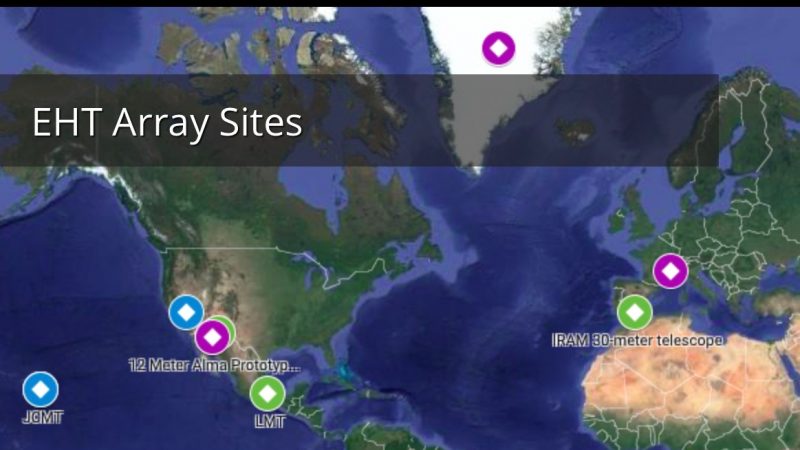 Sites of participating components of the Event Horizon Telescope.

As most of us know, black holes are truly black. That is, they are regions containing so much mass squeezed into so little space – regions of such powerful gravity – that no information or light or anything can escape, even if moving at the fastest speed known to exist in our universe, the speed of light.

Astronomers with the Event Horizon Telescope aren’t aiming to capture the black nothingness of a black hole itself (that’s not possible), but instead a black hole’s event horizon, the sphere-like point-of-no-return surrounding a black hole.

What the @ehtelescope expects to find in 2018 – a silhouette in the glow of radiation at the center of the Milky Way Galaxy. Simulation by 2017 Jansky Fellow Kazunori Akiyama. pic.twitter.com/H0Nz6RRjj9

The secondary target of the Event Horizon Telescope is much, much farther away, some 50-60 million light-years from Earth. It’s the supermassive black hole at the center of M87: the largest galaxy in our home galaxy cluster, the Virgo cluster. How can it appear big to us, at such a great distance away? It contains over 6 billion solar masses. This black hole is so big it could swallow our solar system whole. 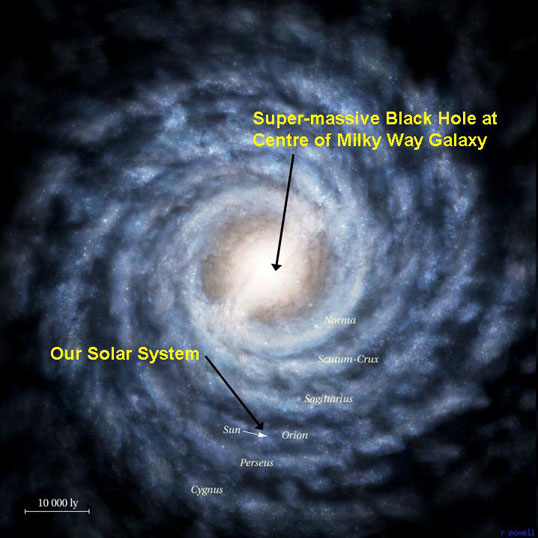 Artist’s concept of the Milky Way galaxy, showing the location of the supermassive black hole in relationship to our solar system’s location, via ZMEScience.

This historic image – the first direct image of a black hole’s event horizon – will give scientists a chance to see what, until now, they’ve been able to explore only theoretically. An event horizon itself is, after all, just a theoretical construct. We don’t know for sure event horizons actually exist (although, clearly, scientists are confident they do). As Ethan Siegel asked in a comprehensive article on this subject (December 27, 2017), in Forbes:

Will it appear as General Relativity predicts? There are some incredible things to test:

… For any fan of astrophysics, black holes, and General Relativity, we’re living in the golden age. What was once deemed “untestable” has suddenly become real.

Stay tuned! This announcement, when it comes, will be big. 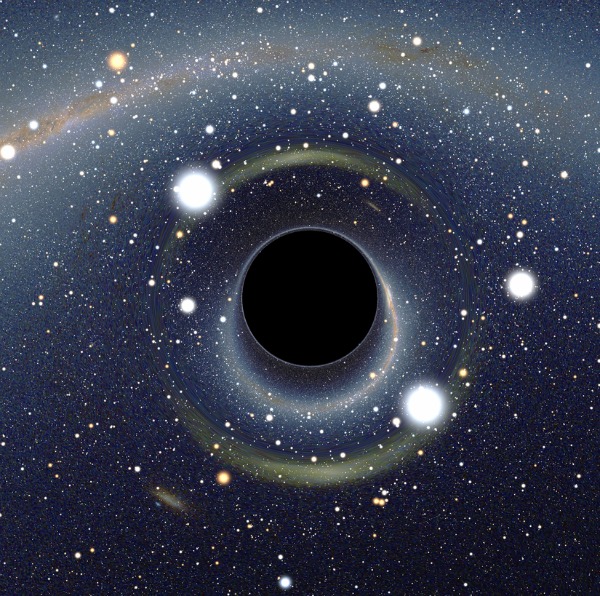 Simulated view of a black hole in front of the Large Magellanic Cloud. Image via Alain r/Wikimedia Commons

Bottom line: Scientists hope to produce the first direct image of a black hole in 2018.

Read more: Seeing the unseeable, an October 2017 article at Nature.com