What scientists call an “illumination map” – created over a six-month period (6 lunar days) from 1,700 images of the moon’s south pole – show parts of the moon that never see sunlight.

The moon is tilted on its axis by only 1.54 degrees, in contrast to Earth’s tilt of 23.5 degrees. All parts of Earth are touched by sunlight. Not so on the moon. Some parts of the moon – craters near the lunar poles – lie in permanent shadow while other nearby regions remain sunlit for the majority of the year. 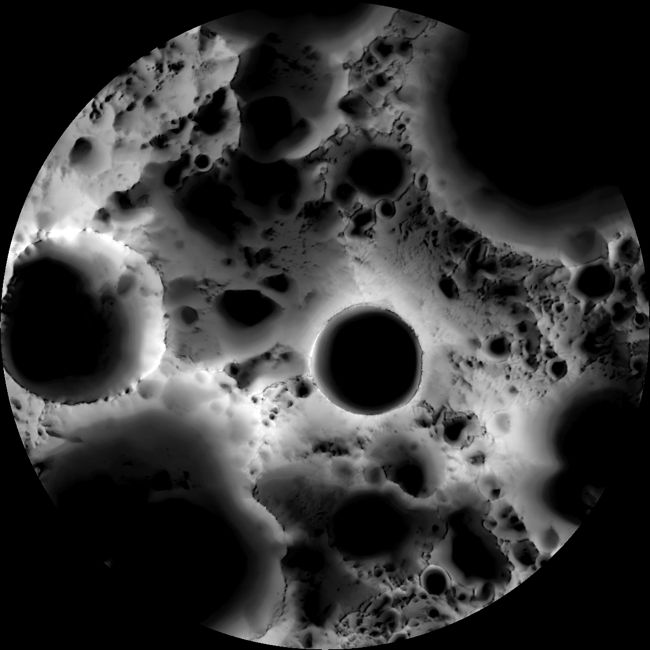 The Lunar Reconnaissance Orbiter (LRO) is a NASA robotic spacecraft orbiting the moon right now. It’s in a low orbit, and its goal is to explore the moon photographically, prior to future manned and robotic moon missions. The Wide Angle Camera on the LRO collected the images of the moon’s South Pole used to create this map. Each image was map projected and converted to a binary image (if the ground was illuminated that pixel was set to one, and if shadowed zero) to differentiate between sunlit and shadowed regions. All the binary images were then stacked, and then for each pixel it was determined what percentage of the time during six months that spot was illuminated. The result is this illumination map!

The Lunar Reconnaissance Orbiter Camera team is making daily (which is about 28 Earth days) and yearly illumination maps for both poles. It is, very simply, exploring the moon prior to future moon missions. For example, the moon’s permanently shadowed craters – shown on this map – might harbor reservoirs of ices and other volatile compounds that could serve as a tremendously valuable resource for future explorers.

Additionally, these volatile deposits could contain a priceless record of water composition dating back to the beginning of our solar system. Given the connection between water and life, you can see how fascinating this dataset would be to scientists studying life in space.

You can click here to see LRO’s current location.

Or just contemplate the illumination map and the moon’s permanently shadowed craters. What could be more mysterious?

Thank you! Your submission has been received!
Oops! Something went wrong while submitting the form.
END_OF_DOCUMENT_TOKEN_TO_BE_REPLACED