Last week, scientists announced the 1st known source for ghostly, high-energy neutrinos. The source is a blazar, a billion-solar-mass black hole 3.7 billion light-years away. The discovery establishes a new way to study the universe.

About four billion years ago, when the planet Earth was still in its infancy, the axis of a black hole about one billion times more massive than the sun happened to be pointing right to where our planet was going to be on September 22, 2017. 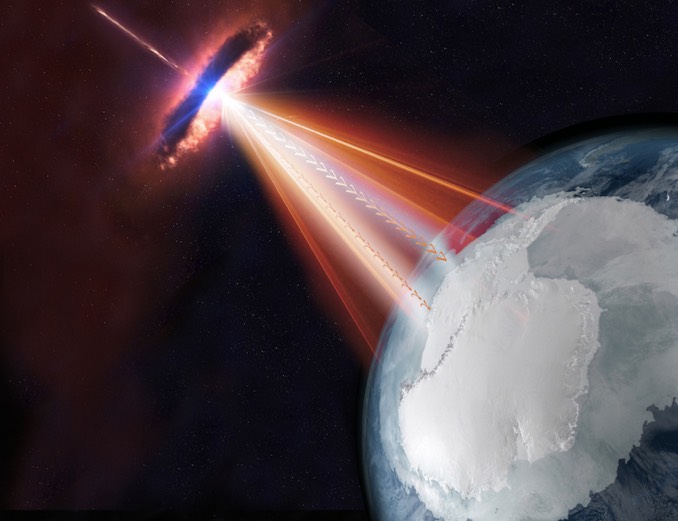 Along the axis, a high-energy jet of particles sent photons and neutrinos racing in our direction at or near the speed of light. The IceCube Neutrino Observatory at the South Pole detected one of these subatomic particles – the IceCube-170922A neutrino – and traced it back to a small patch of sky in the constellation Orion and pinpointed the cosmic source: a flaring black hole the size of a billion suns, 3.7 billion light-years from Earth, known as blazar TXS 0506+056. Blazars have been known about for some time. What wasn’t clear was that they could produce high-energy neutrinos. Even more exciting was such neutrinos had never before been traced to its source.

Finding the cosmic source of high-energy neutrinos for the first time, announced on July 12, 2018, by the National Science Foundation, marks the dawn of a new era of neutrino astronomy. Pursued in fits and starts since 1976, when pioneering physicists first tried to build a large-scale high-energy neutrino detector off the Hawaiian coast, IceCube’s discovery marks the triumphant conclusion of a long and difficult campaign by many hundreds of scientists and engineers – and simultaneously the birth of a completely new branch of astronomy. 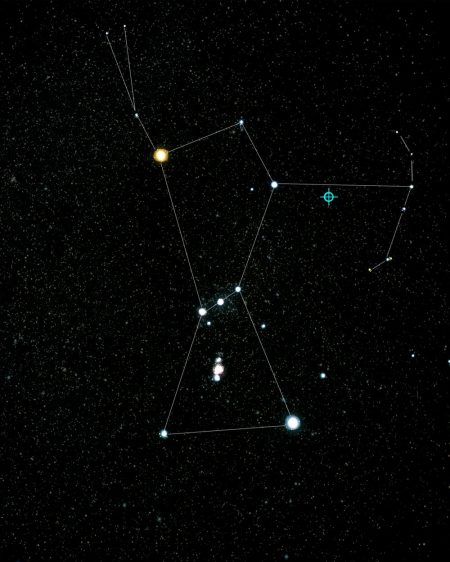 The constellation of Orion, with a bullseye on the location of the blazar. Image via Silvia Bravo Gallart/Project_WIPAC_Communications.

The detection of two distinct astronomical messengers – neutrinos and light – is a powerful demonstration of how so-called multimessenger astronomy can provide the leverage we need to identify and understand some of the most energetic phenomena in the universe. Since its discovery as a neutrino source less than a year ago, blazar TXS 0506+056 has been the subject of intensive scrutiny. Its associated stream of neutrinos continues to provide deep insights into the physical processes at work near the black hole and its powerful jet of particles and radiation, beamed almost directly toward Earth from its location just off the shoulder of Orion.

As three scientists in a global team of physicists and astronomers involved in this remarkable discovery, we were drawn to participate in this experiment for its sheer audacity, for the physical and emotional challenge of working long shifts at in a brutally cold location while inserting expensive, sensitive equipment into holes drilled 1.5 miles deep in the ice and making it all work. And, of course, for the thrilling opportunity to be the first people to peer into a brand new kind of telescope and see what it reveals about the heavens.

At an altitude exceeding 9,000 feet and with average summertime temperatures rarely breaking a frigid -30 Celsius [-22 Fahrenheit], the South Pole may not strike you as the ideal place to do anything, aside from bragging about visiting a place that is so sunny and bright you need sunscreen for your nostrils. On the other hand, once you realize that the altitude is due to a thick coat of ultrapure ice made from several hundred thousand years of pristine snowfall and that the low temperatures have kept it all nicely frozen, then it might not surprise you that for neutrino telescope builders, the scientific advantages outweigh the forbidding environment. The South Pole is now the home of the world’s largest neutrino detector, IceCube. 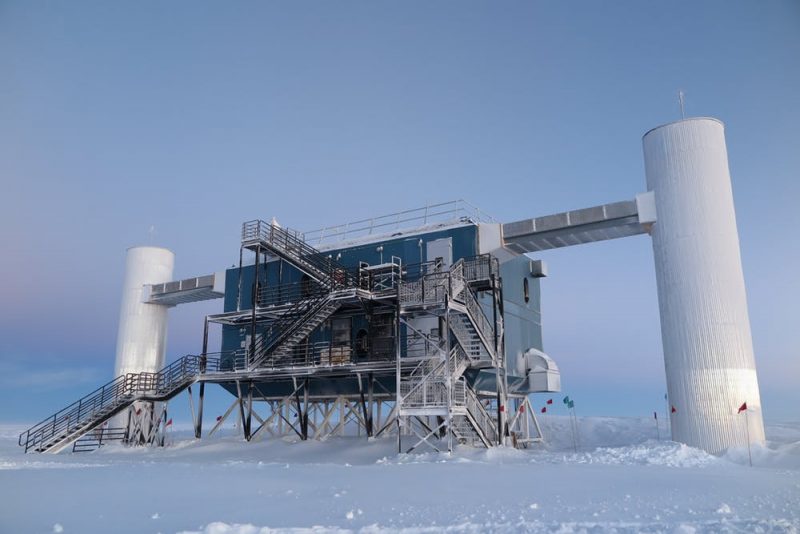 March 2015: The IceCube Laboratory at the Amundsen-Scott South Pole Station, in Antarctica, hosts the computers that collect raw data from the detector. Due to satellite bandwidth allocations, the first level of reconstruction and event filtering happens in near real time in this lab. Image via Erik Beiser, IceCube/NSF.

It may seem odd that we need such an elaborate detector given that about 100 billion of these fundamental particles sashay right through your thumbnail each second and glide effortlessly through the entire Earth without interacting with a single earthly atom.

In fact, neutrinos are the second most ubiquitous particles, second only to the cosmic microwave background photons left over from the Big Bang. They comprise one-quarter of known fundamental particles. Yet, because they barely interact with other matter, they are arguably the least well understood.

To catch a handful of these elusive particles, and to discover their sources, physicists need big – kilometer-wide – detectors made of an optically clear material – like ice. Fortunately Mother Nature provided this pristine slab of clear ice where we could build our detector. 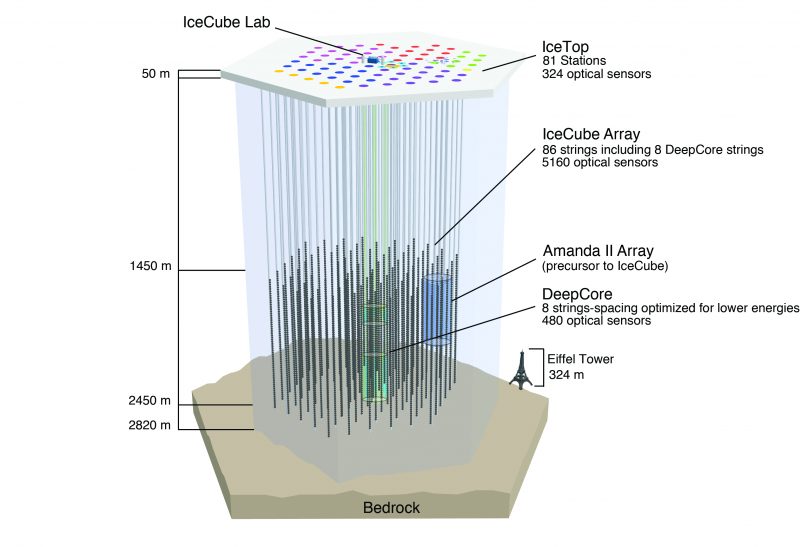 The IceCube Neutrino Observatory instruments take up a volume of roughly one cubic kilometer of clear Antarctic ice with 5,160 digital optical modules (DOMs) at depths between 1,450 and 2,450 meters [about 4,800 and 8,000 feet]. The observatory includes a densely instrumented subdetector, DeepCore, and a surface air shower array, IceTop. Image via Felipe Pedreros, IceCube/NSF.

At the South Pole several hundred scientists and engineers have constructed and deployed over 5,000 individual photosensors in 86 separate 1.5-mile-deep [2.4 km deep] holes melted in the polar ice cap with a custom-designed hot-water drill. Over the course of seven austral summer seasons we installed all the sensors. The IceCube array was fully installed in early 2011 and has been taking data continuously since.

This array of ice-bound detectors can sense with great precision when a neutrino flies through and interacts with a few Earthly particles that generate dim patterns of bluish Cherenkov light, given off when charged particles move through a medium like ice at close to light speed.

Blazar emission reaches Earth: Gamma rays (magenta), the most energetic form of light, and elusive particles called neutrinos (gray) formed in the jet of an active galactic nucleus far, far away. The radiation traveled for about 4 billion years before reaching Earth. The IceCube Neutrino Observatory at the South Pole detected the arrival of neutrino IC170922 entering Antarctica on September 22, 2017. After the interaction with a molecule of ice, a secondary high-energy particle – a muon – enters IceCube, leaving a trace of blue light behind it. Via NASA’s Goddard Space Flight Center/CI Lab/Nicolle R. Fuller/NSF/IceCube.

Neutrinos from the cosmos

The Achilles’ heel of neutrino detectors is that other particles, originating in the nearby atmosphere, can also trigger these patterns of bluish Cherenkov light. To eliminate these false signals, the detectors are buried deep in the ice to filter out interference before it can reach the sensitive detector. But in spite of being under nearly a mile of solid ice, IceCube still faces an onslaught of about 2,500 such particles every second, each of which could plausibly have been due to a neutrino.

With the expected rate of interesting, real astrophysical neutrino interactions (like incoming neutrinos from a black hole) hovering at about one per month, we were faced with a daunting needle-in-a-haystack problem.

The IceCube strategy is to look only at events with such high energy that they are exceedingly unlikely to be atmospheric in origin. With these selection criteria and several years of data, IceCube discovered the astrophysical neutrinos it had long been seeking, but it could not identify any individual sources – such as active galactic nuclei or gamma-ray bursts – among the several dozen high-energy neutrinos it had captured.

To tease out actual sources, IceCube began distributing neutrino arrival alerts in April 2016 with help from the Astrophysical Multimessenger Observatory Network at Penn State. Over the course of the next 16 months, 11 IceCube-AMON neutrino alerts were distributed via AMON and the Gamma-ray Coordinates Network, just minutes or seconds after being detected at the South Pole. 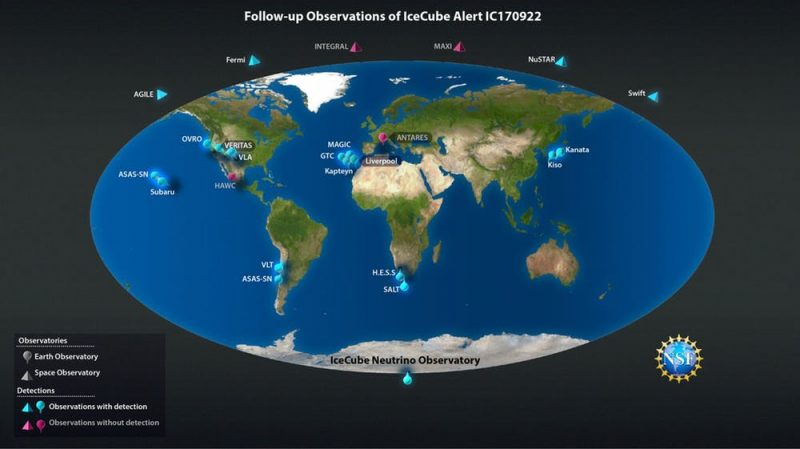 On September 22, 2017, IceCube alerted the international astronomy community about the detection of a high-energy neutrino. About 20 observatories on Earth and in space made follow-up observations, which allowed identification of what scientists deem to be a source of very high energy neutrinos and, thus, of cosmic rays. Besides neutrinos, the observations made across the electromagnetic spectrum included gamma-rays, X-rays, and optical and radio radiation. These observatories are run by international teams with a total of more than 1,000 scientists supported by funding agencies in countries around the world. Image via Nicolle R. Fuller/NSF/IceCube.

A new window on the universe

The alerts triggered an automated sequence of X-ray and ultraviolet observations with NASA’s Neil Gehrels Swift Observatory and led to further studies with NASA’s Fermi Gamma-Ray Space Telescope and Nuclear Spectroscopic Telescope Array, and 13 other observatories around the world.

Swift was the first facility to identify the flaring blazar TXS 0506+056 as a possible source of the neutrino event. The Fermi Large Area Telescope then reported that the blazar was in a flaring state, emitting many more gamma-rays than it had in the past. As the news spread, other observatories enthusiastically jumped on the bandwagon and a broad range of observations ensued. The MAGIC ground-based telescope noted our neutrino came from a region producing very high-energy gamma-rays (each about ten million times more energetic than an X-ray), the first time such a coincidence has ever been observed. Other optical observations completed the puzzle by measuring the distance to blazar TXS 0506+056: about four billion light years from Earth.

With the first-ever identification of a cosmic source of high-energy neutrinos, a new branch on the astronomy tree has sprouted. As high-energy neutrino astronomy grows with more data, improved inter-observatory coordination, and more sensitive detectors, we will be able to map the neutrino sky with better and better precision.

And we expect exciting new breakthroughs in our understanding of the universe to follow suit, such as: solving the century-old mystery of the origin of astoundingly energetic cosmic rays; testing if spacetime itself is foamy, with quantum fluctuations at very small distance scales, as predicted by certain theories of quantum gravity; and figuring out exactly how cosmic accelerators, like those around the TXS 0506+056 black hole, manage to accelerate particles to such breathtakingly high energies.

For 20 years, the IceCube Collaboration had a dream to identify the sources of high-energy cosmic neutrinos – and this dream is now a reality.

Bottom line: The Icecube Observatory has detected a high-energy subatomic neutrino and traced it to its origin, a blazar.