Scientists have been trying to figure out how clouds form in Mars’ thin atmosphere, and thanks to new research, the answer seems to be … meteors. 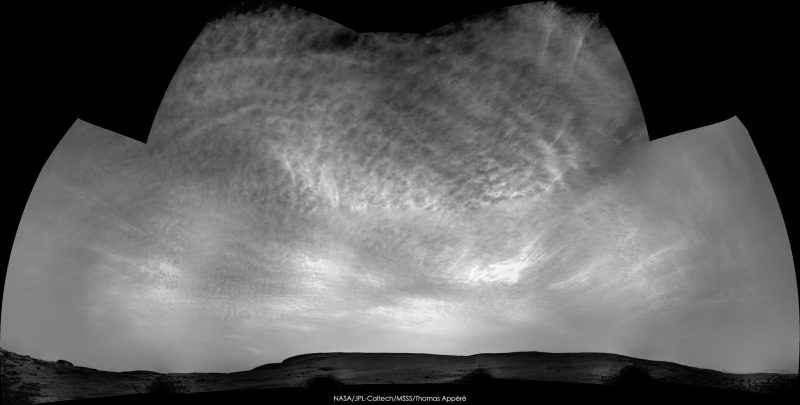 A stunning view of cirrus-like clouds seen by the Curiosity rover on Mars, on sol 2417. This is a cloudy day for Mars! Image via NASA/JPL-Caltech/MSSS/Thomas Appéré.

Mars’ atmosphere is very thin, but – much like Earth – Mars does have clouds, silently gracing the pinkish-colored skies. But how do they form? A new study from the University of Colorado Boulder (CU Boulder) has found that meteors play a big role in cloud-formation on Mars. This new insight by scientists was published on June 17, 2019, in the peer-reviewed journal Nature Geoscience.

The wispy clouds in Mars’ middle atmosphere, at about 18 miles (29 km) altitude and similar to cirrus clouds on Earth, are formed at least partially from what is called “meteoric smoke,” icy dust created by space debris slamming into the planet’s atmosphere, as also happens on Earth. According to Victoria Hartwick, a graduate student at CU Boulder:

We’re used to thinking of Earth, Mars and other bodies as these really self-contained planets that determine their own climates. But climate isn’t independent of the surrounding solar system.

Just as on Earth, clouds can’t just form spontaneously out of nowhere. They need some kind of “seeds” to start, particles around which water molecules can condense. On Earth – because we have a denser atmosphere – those particles might include grains of sea salt or dust, carried upward by winds. As earthly water molecules condense around these particles, the cloud formations can grow larger and larger. As Hartwick noted:

Clouds don’t just form on their own. They need something that they can condense onto. 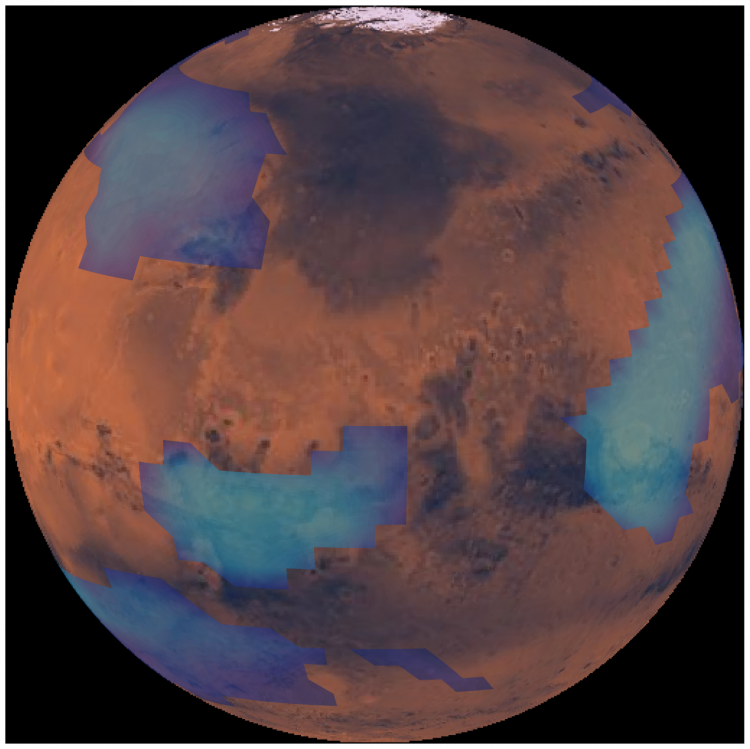 On Mars, however – with its vastly thinner atmosphere – there is a lack of those kinds of particles in the middle atmosphere. So how do the clouds form? That’s where meteors come in. When small meteors hit Mars’ atmosphere, they burn up, just as they do in Earth’s atmosphere. As a result, a lot of fine dust is created – the “meteoric smoke” – the particles of which can serve as the needed seeds for clouds to form. Hartwick’s team used computer simulations to test this hypothesis, and indeed, clouds did form after such meteor strikes. According to Hartwick:

Our model couldn’t form clouds at these altitudes before. But now, they’re all there, and they seem to be in all the right places.

The study shows that interplanetary dust can create Martian clouds, but there is still a limit on what kinds of clouds, due to the extreme thinness of Mars’ atmosphere. Pretty much all Martian clouds are wispy and cotton candy-like, very similar to cirrus clouds on Earth. You don’t see the big, puffy clouds that you would lie on the grass and gaze up at as a kid on Earth. Nevertheless, clouds on Mars can affect the Martian environment, according to Hartwick:

But just because they’re thin and you can’t really see them doesn’t mean they can’t have an effect on the dynamics of the climate.

Noctilucent clouds in Mars’ sky, seen by the Curiosity rover. Curiosity captured these clouds on Sol 2410 (May 18, 2019). The clouds are sunlit although the sun has set; they’re noctilucent clouds or night-shining clouds. Image via NASA/JPL-Caltech/Justin Cowart/The Planetary Society.

Noctilucent clouds in motion, Curiosity, Sol 2405. Curiosity looked upward after sunset on Sol 2405 (May 13, 2019) and saw wispy cirrus clouds in motion, high above the ground. Because of their high elevation, the clouds are still sunlit, making them noctilucent (night-shining) clouds. Image via NASA/JPL-Caltech/Justin Cowart/The Planetary Society.

The research team found that the clouds could cause temperatures at those altitudes to increase or decrease by as much as 18 degrees Fahrenheit (10 degrees Celsius). These kinds of observations can also provide clues about the evolution of the Martian atmosphere and how it changed from being able to support liquid water on Mars’ surface to the thin, cold atmosphere we see today. As noted by Brian Toon, a professor at CU Boulder:

More and more climate models are finding that the ancient climate of Mars, when rivers were flowing across its surface and life might have originated, was warmed by high altitude clouds. It is likely that this discovery will become a major part of that idea for warming Mars.

Earth also has clouds formed from meteoric dust, called noctilucent clouds. They are the highest clouds in the atmosphere, at about 50 miles (80 km) altitude. They can be seen after the sun has set, but are still reflecting sunlight, giving them a bright blue glow. The month of June marks the start of noctilucent cloud season on Earth, and this June, in particular, has been a great month for seeing them. 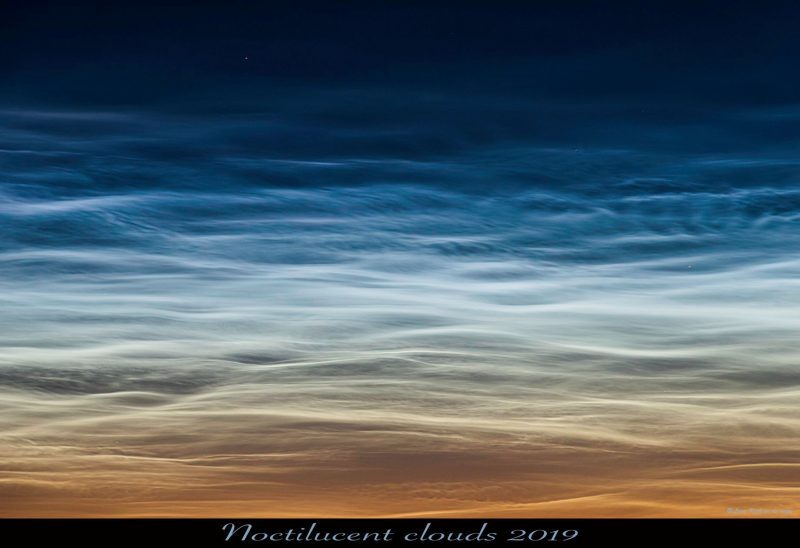 An example of noctilucent clouds on Earth. Leon KijkindeVegte in the Netherlands caught this photo on the night of June 12, 2019. He posted it at the great Facebook page Noctilucent Clouds Around The World.

Martian clouds have been observed ever since the first telescopes were aimed at the planet. Some are composed of water vapor/ice while others are carbon dioxide ice. They can often be seen hanging around the summit of Olympus Mons, the largest volcano in the solar system, and elsewhere on Mars. They have been photographed by orbiting spacecraft as well as landers and rovers on the surface. Some beautiful new images were just taken recently by the Curiosity rover in Gale Crater, showing one of the best displays ever seen so far, almost giving the skies an Earth-like overcast look.

These clouds are too tenuous, and the atmosphere too thin, for rain to ever occur, but the Phoenix lander did observe snow falling from high above its location near the north pole in 2008. Fog is also common on Mars, often filling valleys and craters, and frost has also been observed on the ground, condensing from the thin air at night. This is all part of a water cycle on Mars that in many ways mimics that of Earth, despite the minuscule atmosphere and lack of surface water. 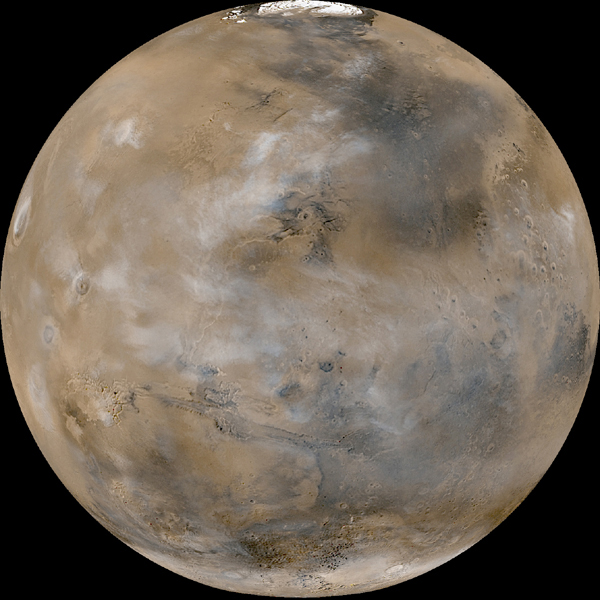 Bottom line: New research shows that clouds on Mars are formed largely from icy dust left behind by small meteors hitting the atmosphere.