Could ETs use star mergers to communicate?

When 2 extremely dense neutron stars orbit each other closely, they spiral inward over time and eventually merge. Such mergers are powerful. Could advanced civilizations be using them to signal across the cosmos? 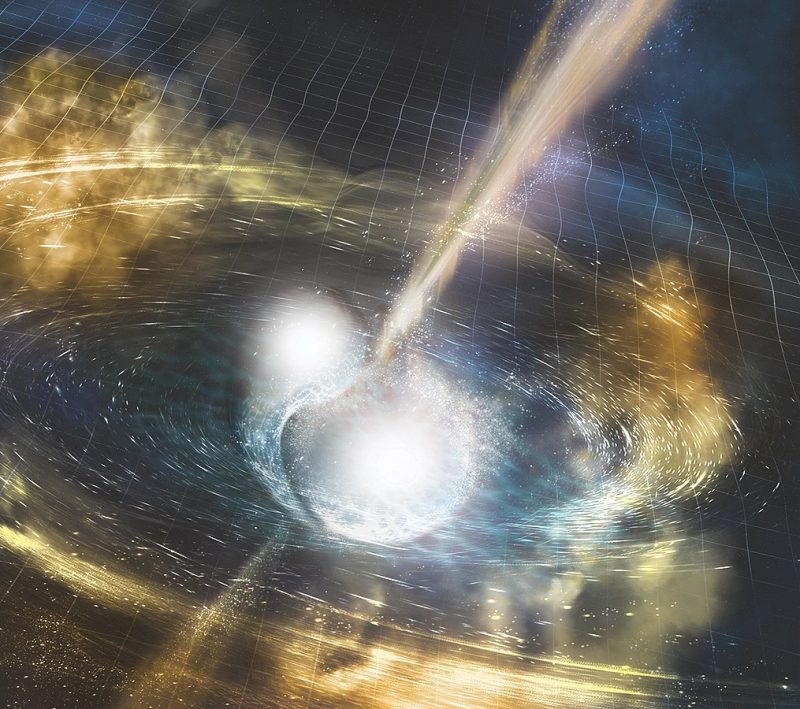 Artist’s concept of a binary or double star system, where the 2 stars are merging. Could an alien civilization use neutron star mergers to communicate across space? Image via NSF/LIGO/Sonoma State University/A. Simonnet.

When it comes to the Search for Extraterrestrial Intelligence (SETI) most people think first of searches using radio telescopes to look for signals from distant alien civilizations. Other possibilities – such as optical SETI, which searches for extraterrestrial laser pulses – have become more popular in recent years as well. After all, as many people argue, why would an advanced civilization limit itself to using just radio? Now researchers in Japan offer a different and intriguing approach to SETI. What about looking for signals that have been synchronized with two merging neutron stars?

Other scientists are taking this idea seriously enough to enable its publication in a major journal. The work passed peer-review and was published in The Astrophysical Journal Letters – aka ApJ Letters – on August 1, 2018.

The overriding problem with SETI is that there is simply so much space, literally, to search. What are the best places to look? And when should we be looking?

The idea of communicating via binary (double) star mergers sounds far-out, but the premise is pretty simple. The ETs could deliberately time a communication so that it coincides with a very noticeable and natural, but transient, cosmic event – like a supernova or gamma-ray burst – thinking that telescopes of other (semi-advanced) civilizations, such as ours on Earth, might be pointed toward such an event. Writing in ApJ Letters, the authors said:

We discuss the possibility of receiving a radio signal from extra-galactic intelligence, around the time when we observe a binary neutron star merger in their galaxy. High-precession measurements of the binary parameters would allow them to send the signal ~104 years before they themselves observe the merger signal. Using the SKA, we might receive ~104 bits of data, transmitted from 40 Mpc away with an output power of ~1TW.

In other words, what these scientists have done is look at the numbers, trying to set the parameters for the possibility of ET communications via binary star mergers, in case such communication does exist. 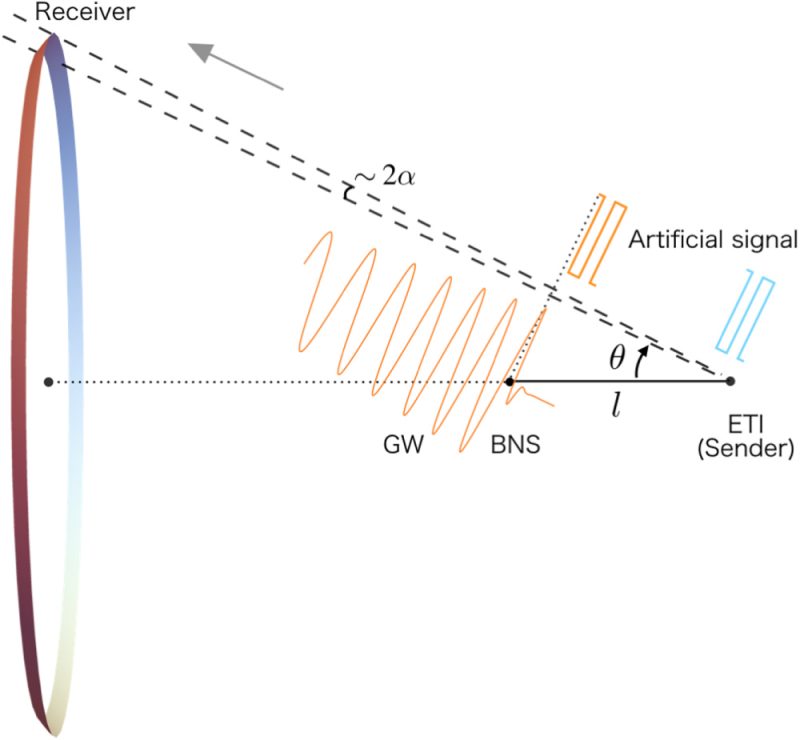 Schematic showing how an ET civilization in another galaxy could use a binary merger of 2 neutron stars to help send a radio signal, in such a way that the signal would arrive at the same time as the natural signal from the merger itself. Image via Nishino & Seto 2018.

One caveat is that such a civilization would need to be able to predict precisely when the next usable binary neutron star merge was going to happen. They’d need that knowledge so that their signal could be timed to arrive at the same time as the natural signal, if, say, they wanted to send their signal to a specific place (like Earth), a place that they’d already have determined to have radio communication, at least.

For most such natural events, that knowledge would be difficult. But an interesting possibility stands out – the electromagnetic and gravitational-wave radiation from a binary merger (the merger of two neutron stars) – believed to be a relatively common phenomenon in the universe. The new study, led by Yuki Nishino and Naoki Seto, examines the possibility of an ET civilization synchronizing their artificial signal with a natural signal from a binary neutron star merger. 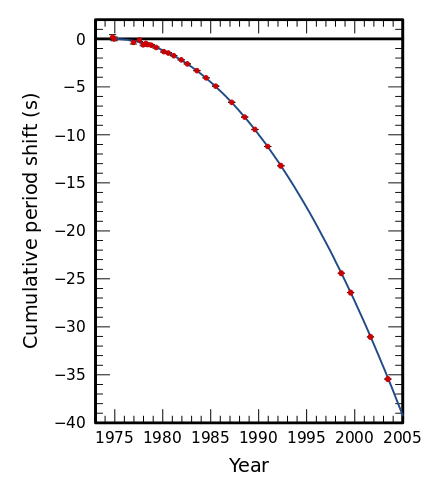 Chart showing the orbital decay of the binary neutron star PSR B1913+16. Astronomers have used the timing of its radio pulses to precisely measure the rate of decay over decades. Using this same information, an ET civilization could predict when the 2 stas in the binary system would eventually merge. Then they’d be able to synchronize their artificial signal with this natural signal. Image via Inductiveload.

So just how can such a merger be predicted? Neutron stars are sometimes seen by us on Earth as pulsars. In other words, sometimes one or both stars are seen to emit pulses of light. By measuring the exact timing of pulsars in a binary neutron star system, it’s possible to measure the orbit and decay rate of the orbits of the two stars. With that information, astronomers can calculate when the two stars will merge.

Presumably ET astronomers can do this same measurement and calculation. They could then send their artificial signal, timing it to arrive at same time as the gravitational-wave burst from the merger. A known signal from space – thought to be a signal from a neutron star binary merger – is the one labeled GW170817. Writing in ApJ Letters, the authors said:

When searching for an artificial signal from an extraterrestrial intelligence (ETI), a central concern is how efficiently we can decrease the parameter space under examination. These circumstances would be inversely understood by the ETI, and they would carefully arrange the timing and direction of the transmissions. In this Letter, we have pointed out that a binary neutron star merger in their galaxy could be an ideal event for the signal synchronization. This is because the ETI would be able to estimate the location and the epoch of the highly energetic event in advance. Most optimistically, we might actually find an artificial signal by reanalyzing the electromagnetic data already taken from GW170817. Additionally, the LIGO-Virgo network will start the next observational run in early 2019, and a new binary neutron star merger might be identified. The early and deep radio observation for its host galaxy might also be worth considering from the perspective of SETI.

Yes, all of this sounds like science fiction. But it is a communication method that could work, at least theoretically. The amount of power needed to send such a signal, however, would be far beyond what we can do right now, but could be feasible for a much more advanced ET civilization. Nishino and Seto calculate, for example, that for a civilization in a galaxy 130 million light-years away, ten megabytes of data could be sent to a receiver similar to the Square Kilometer Array on Earth, using a powerful ~1 terawatt radio transmitter. One terawatt is equal to about 10 percent of the current energy consumption on all of Earth. Using that amount of energy has been contemplated, even by us puny earthlings.

So the new work of Yuki Nishino and Naoki Seto is intriguing, to say the least, even if seemingly bizarre. Could highly advanced ETs use a transmitter more powerful than any on Earth to send a communication signal deep into the cosmos, perhaps even to other galaxies, with the help of one of the most intense natural cosmic phenomena known to exist?

As a Disney employee once said, if you can dream it, you can do it. Perhaps ETs have that saying also! 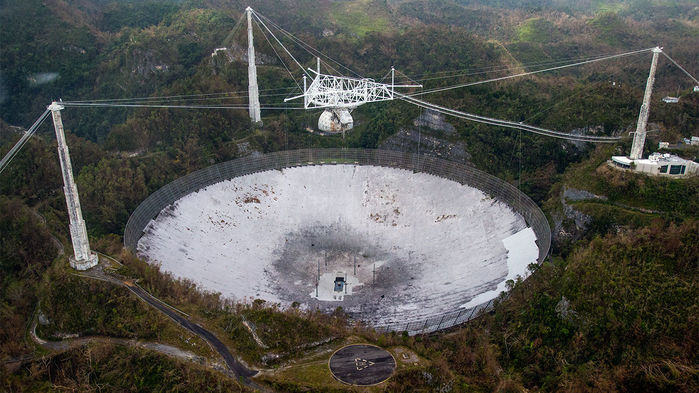 Traditional SETI uses large radio telescopes such as the one at the Arecibo Observatory in Puerto Rico. A much more powerful transmitter would be needed to send a signal in a way that the new study proposes. Image via GDA/AP Images.

Bottom line: Communicating across deep space, especially between galaxies, isn’t easy. A new study suggests it might be easier with the help of binary mergers of neutron stars. It’s a radical idea, but a fascinating one.