A powerful telescope orbiting Mars gives us a new view of Earth and its moon, showing continent-size detail on Earth and the relative size of the moon. 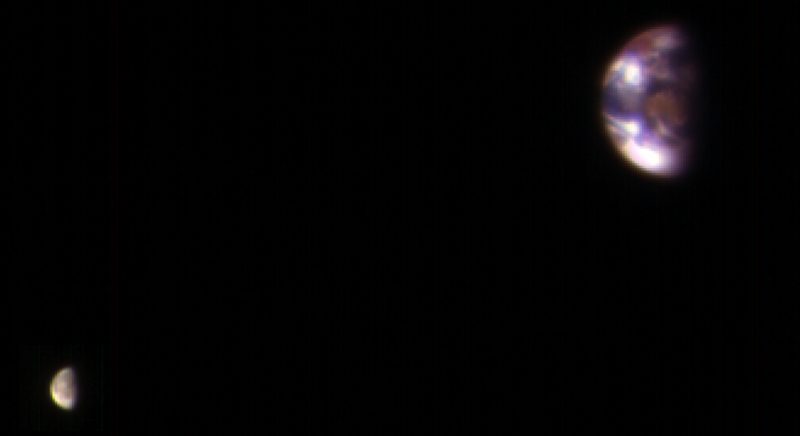 Earth and its moon, seen from Mars. The HiRISE camera on NASA’s Mars Reconnaissance Orbiter acquired 2 images on November 20, 2016, which were combined, with brightness adjusted separately to show details on both bodies. Image via NASA/ JPL-Caltech/ Univ. of Arizona.

The awesome HiRISE camera (High Resolution Imaging Science Experiment) on NASA’s Mars Reconnaissance Orbiter has acquired another great image from the perspective of its orbit around the planet next door. HiRISE, which is operated out of the University of Arizona, acquired the two images to create this view of the Earth and moon on November 20, 2016. NASA said on January 6, 2017, when it released this photo:

The images were taken to calibrate HiRISE data, since the reflectance of the moon’s Earth-facing side is well known. For presentation, the exposures were processed separately to optimize detail visible on both Earth and the moon. The moon is much darker than Earth and would barely be visible if shown at the same brightness scale as Earth.

The combined view retains the correct positions and sizes of the two bodies relative to each other. The distance between Earth and the moon is about 30 times the diameter of Earth. Earth and the moon appear closer than they actually are in this image because the observation was planned for a time at which the moon was almost directly behind Earth, from Mars’ point of view, to see the Earth-facing side of the moon.

In the image, the reddish feature near the middle of the face of Earth is Australia. When the component images were taken, Mars was about 127 million miles (205 million km) from Earth.

With HiRISE and five other instruments, the Mars Reconnaissance Orbiter has been investigating Mars since 2006.

So these images are what you’d see from (for example) a base on one of Mars’ moons, if you had a telescope like HiRISE. It consists of a 19.7-inch (0.5-meter) aperture reflecting telescope. That’s not a huge telescope by earthly standards, but it’s the largest so far of any deep space mission. HiRISE can acquire pictures of Mars’ surface with resolutions of about a foot (0.3 m/pixel), resolving objects below 3 feet (a meter) across. 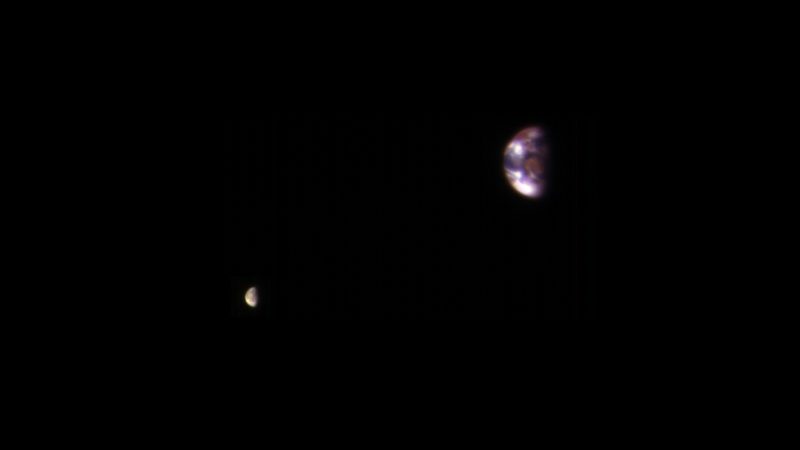