Beautiful outcome of a fight between sibling stars

In a cosmic ‘stellar fight,’ a red giant star engulfed its smaller binary companion star. The chaos, however, created a beautiful space image. 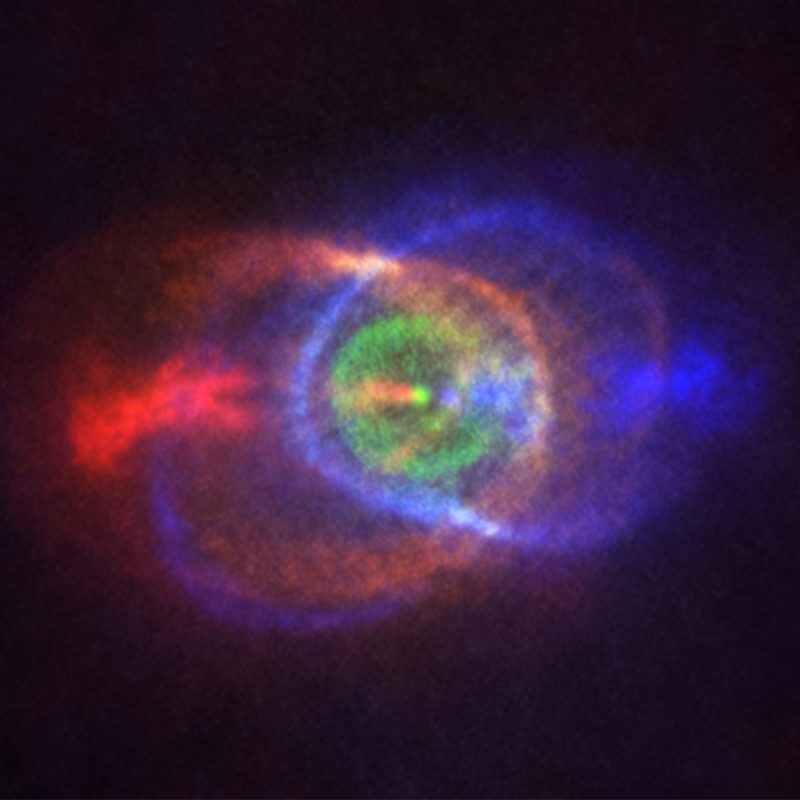 Stars like our sun die by expanding into huge, bloated red giants. Over time, some lose their outer layers gradually, leaving behind only a hot core called a white dwarf. Our sun is expected to end its life in this way. In the case of the binary star system HD101584, however, the death process was interrupted prematurely, and the result was the beautiful image shown at top. The European Southern Observatory (ESO) released this new image from the ALMA telescope in Chile on February 5, 2020. It shows what can happen when one star swallows another. Hans Olofsson of the Chalmers University of Technology in Sweden, who led a recent study of this object, commented in a statement:

The star system HD101584 is special in the sense that this ‘death process’ was terminated prematurely and dramatically as a nearby low-mass companion star was engulfed by the giant.

Here’s what’s happening in this image. The more massive star in the HD101584 system would have expanded into a red giant faster than its less massive companion. It eventually grew large enough to swallow up its smaller companion star.

As the smaller star became engulfed, it began to spiral in towards the core of the red giant, but never actually collided with it. Instead, the larger star experienced a massive outburst, shedding its outer gas layers.

Jets of gas formed during this process, blasting though material previously ejected from the star, which formed the rings of gas. 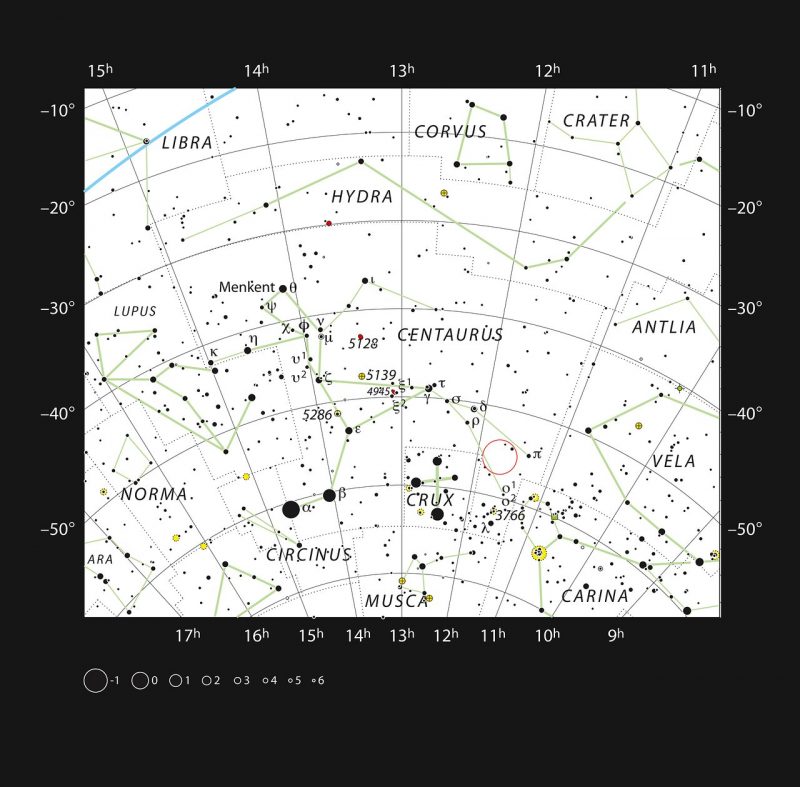 The double star system HD101584 is located in our sky in the direction of the constellation of Centaurus. HD101584 itself is highlighted with a red circle on this chart. Image via ESO.

The nebula-like gas cloud in the new ALMA image is beautiful, and it can also provide scientists with valuable clues about how sunlike stars form and evolve. As co-author Sofia Ramstedt from Uppsala University in Sweden explained:

Currently, we can describe the death processes common to many sunlike stars, but we cannot explain why or exactly how they happen. HD101584 gives us important clues to solve this puzzle since it is currently in a short transitional phase between better studied evolutionary stages. With detailed images of the environment of HD101584 we can make the connection between the giant star it was before, and the stellar remnant it will soon become.

Hans Olofsson of the Chalmers University of Technology in Sweden led the study of HD101584. Image via Stockholm University.

ESO said that it’s ALMA’s ability to see distant objects sharply – combined with data from the ESO-operated Atacama Pathfinder EXperiment (APEX) – that made this image possible. Elizabeth Humphries, another co-author from ESO in Chile, explained that the combination of ALMA and APEX was essential to being able to study “both the physics and chemistry in action” of the gas cloud.

Right now, the two stars in this gas cloud can’t be resolved separately as they are too close together and too distant. Only the colorful tendrils of gas now surrounding them can be easily seen. But, ESO said, its upcoming Extremely Large Telescope, now under construction, will be able to see them more clearly for the first time. As Olofsson said, it:

Will provide information on the ‘heart’ of the object.

The video below – also released February 5, 2020 – is also very cool. It starts by showing a wide-field view of a region of the sky in the constellation of Centaurus, then zooms in to show HD 101584, and the beautiful gas cloud surrounding the binary star.

Bottom line: A “stellar fight” – where a red giant star engulfed a smaller companion star – resulted in a beautiful and colorful gas cloud. Stars go through a process of birth, life, death – and even conflict – much as living things do. In this case, the cause of this cosmic display was chaotic and violent, but its result was beautiful.