Researchers in Spain have published a new study revealing details of a multi-layered, sandwich-like haze that hangs above the famous hexagon at Saturn’s north pole. 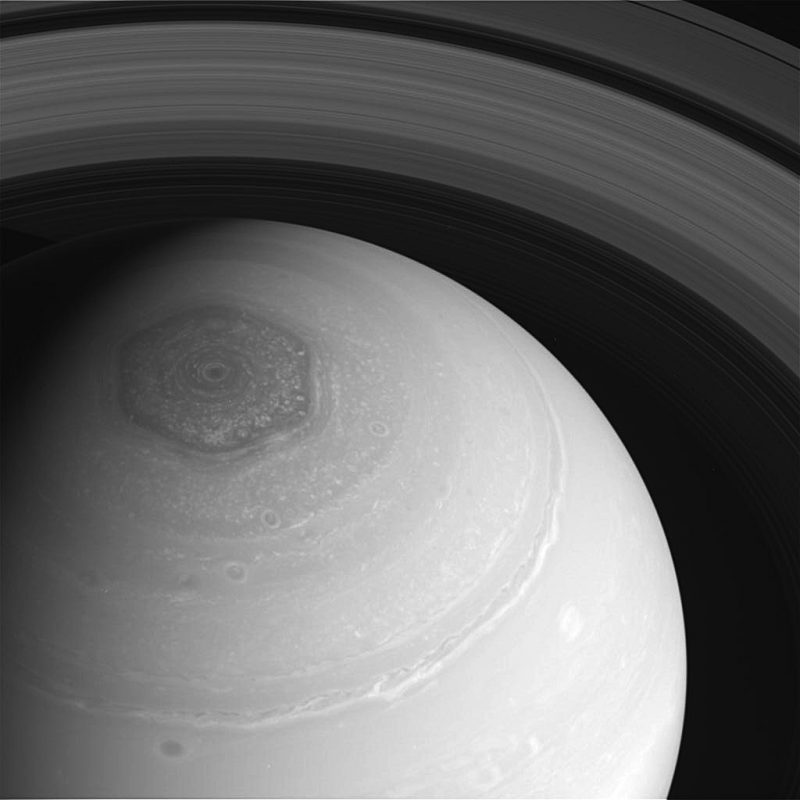 A view of Saturn, its rings and its north polar hexagon, as captured by Cassini on November 27, 2013. Image via NASA/ JPL/ SSI/ Lights in the Dark.

Did you know that Saturn has a huge, persistent, hexagonal (six-sided) cloud formation at its north pole? Saturn’s hexagon is one of the most unusual and easily recognized features in the solar system. Now, a new study from researchers at the University of the Basque Country in Spain has revealed details about a multi-layered, sandwich-like haze that hangs above the hexagon itself. The findings come from an examination of images taken by the Hubble Space Telescope as well as those sent back by the Cassini spacecraft, which orbited Saturn from 2004 to 2017.

The results were published in a new peer-reviewed paper in Nature Communications on May 8, 2020.

The hazes above Saturn’s hexagon were first seen by Cassini in June 2015 in high-resolution images of the planet’s limb taken by the spacecraft’s main camera. Those images captured details as small as 0.6 to 1.2 miles (1-2 km) in size. Cassini was able to see the hazes as well as analyze their composition, using color filters from ultraviolet to near-infrared.

The hazes are above the clouds that form the hexagon. The scientists identified at least seven distinct haze layers. 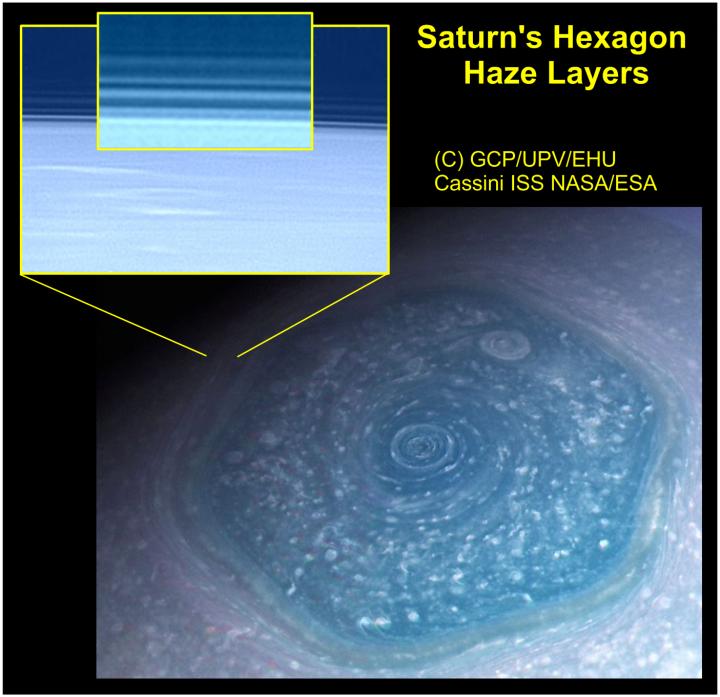 A closer look at Saturn’s north polar hexagon, captured by Cassini; the inset shows a closeup of the haze layers above the hexagon. Image via UPV/ EHU/ EurekAlert!.

The Cassini images have enabled us to discover that, just as if a sandwich had been formed, the hexagon has a multi-layered system of at least seven mists that extend from the summit of its clouds to an altitude of more than 300 km (186 miles) above them. Other cold worlds, such as Saturn’s satellite Titan or the dwarf planet Pluto, also have layers of hazes, but not in such numbers nor as regularly spaced out.

In June 2015, Cassini high-resolution images of Saturn’s limb southwards of the planet’s hexagonal wave revealed a system of at least six stacked haze layers above the upper cloud deck. Here, we characterize those haze layers and discuss their nature. Vertical thickness of layers ranged from 7 to 18 km [4-11 mi], and they extended in altitude about 130 km [80 mi], from pressure level 0.5 bar to 0.01 bar. Above them, a thin but extended aerosol layer reached altitude about 340 km [211 mi] (0.4 mbar). Radiative transfer modeling of spectral reflectivity shows that haze properties are consistent with particles of diameter 0.07–1.4 um and number density 100–500 cm-3. The nature of the hazes is compatible with their formation by condensation of hydrocarbon ices, including acetylene and benzene at higher altitudes. Their vertical distribution could be due to upward propagating gravity waves generated by dynamical forcing by the hexagon and its associated eastward jet. 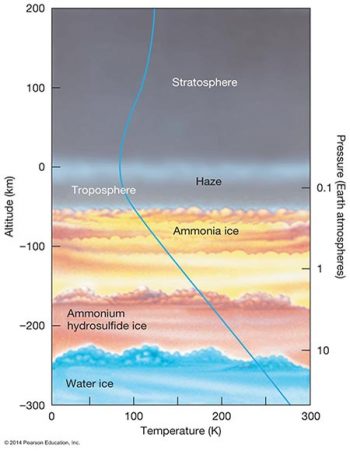 Illustration of the layers in Saturn’s atmosphere, including haze on top. Image via KHadley.com.

Hubble was also able to see the hexagon from above, not just on the limb of Saturn, as with Cassini.

The new study of the hexagon and its hazes shows just how complex this weather system and other meteorological phenomena are in Saturn’s deep and turbulent hydrogen atmosphere.

Each haze layer is between 4.3 to 11 miles (seven to 18 kilometers) thick and composed of very tiny particles about one micrometer (one-millionth of a meter) in size. Based on the Cassini data, the particles are composed of hydrocarbon ice crystallites, such as acetylene, propyne, propane, diacetylene and perhaps butane. This is like nothing found on Earth, but that isn’t too surprising, since Saturn’s atmosphere is mostly hydrogen and is much colder than Earth’s, between minus 184 and minus 292 Fahrenheit (minus 120 and minus 180 degrees Celsius).

The researchers also found that the hazes have a regular vertical distribution, thought to be caused by the vertical propagation of gravity waves that produce oscillations in the density and temperature of the atmosphere. This is common, and has been observed on other planets as well, including Earth. According to the researchers, the gravity waves may be caused by the hexagon itself and the powerful jet stream that races around it. Even on Earth, such gravity waves have been seen, produced by jet streams that travel at 62 miles per hour (100 kilometers per hour), from west to east in the mid-latitudes. On giant Saturn, though, the gravity waves and jet streams are much faster and more powerful.

High-resolution overhead view from Cassini of Saturn’s hexagon in motion. A massive hurricane is in the center of the hexagon and many other smaller storms can also be seen. The colors are from different wavelengths, from ultraviolet to visible light, combined to make the movie. Image via NASA Science.

The hexagon was a surprising and fascinating discovery by Cassini. When viewed directly from above, it looks almost perfect, like a giant piece of artwork floating over Saturn’s north pole. At the center of the hexagon is a massive churning hurricane, with an eye 50 times larger than the average hurricane’s eye on Earth. Many other smaller vortices are also seen within the hexagon, some of which are swept along with the jet stream.

You can see the movement of the features within the hexagon in this high-resolution movie. While hurricanes on Earth generally last about a week or so, this hexagon and central hurricane are thought to have been there for at least decades, if not centuries. As Andrew Ingersoll from the former Cassini imaging team said:

The hexagon is just a current of air, and weather features out there that share similarities to this are notoriously turbulent and unstable. A hurricane on Earth typically lasts a week, but this has been here for decades – and who knows – maybe centuries.

The stunning beauty of the hexagon, and the intricacy of the layers above it, show how complex Saturn’s atmosphere and weather systems are. In some ways they are reminiscent of storms and weather on Earth, but on a much larger scale, and manifesting in ways unlike anything seen on our own planet.