Japan’s Hayabusa 2 is now just 12 miles (20 km) from Ryugu’s surface. The spacecraft will now begin studying the asteroid to find the best locations for its lander and 3 small rovers. 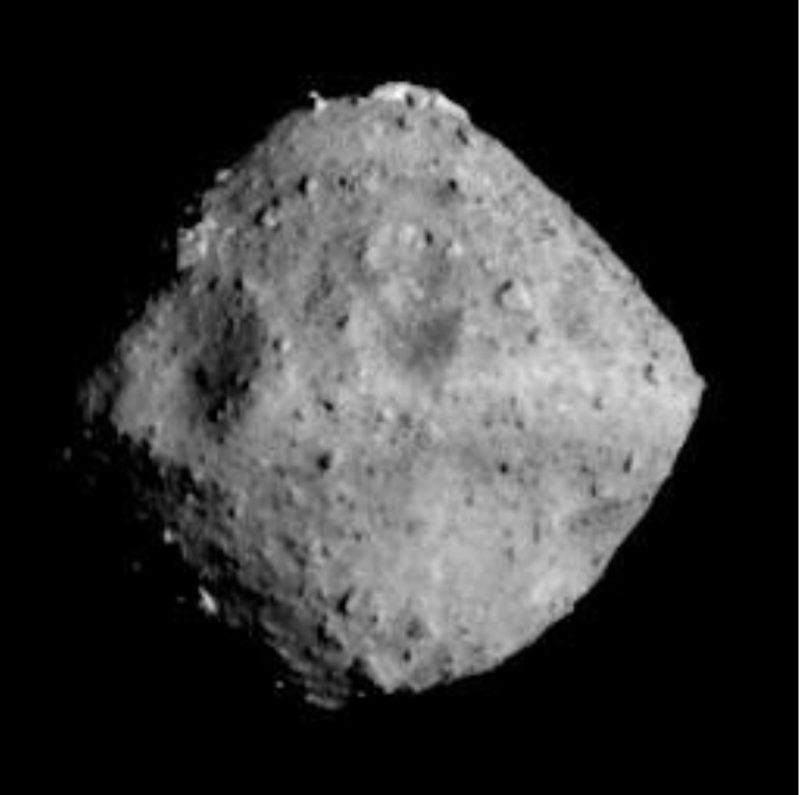 After a 42-month journey, Japan’s Hayabusa2 spacecraft has arrived at asteroid 162173 Ryugu – about 200 million miles (~300 million km) from Earth. The Japan Aerospace Exploration Agency, or JAXA, confirmed the arrival on June 27, 2018. Prior to arriving, the spacecraft had been sending back images for several days as it inched closer to Ryugu. It closed to just 12 miles (20 km) from the asteroid’s surface on June 27 at 00:35 UTC; translate UTC to your time.

Hayabusa 2 has already been providing the first-ever close-up views of this asteroid, which is classified as a near-Earth object. The images show a roughly diamond-shaped body – also being compared to a spinning top – with boulders and craters.

Hayabusa 2 aims to study Ryugu in detail, deposit a European and a series of Japanese landers on the surface and return a sample of ancient asteroid rock back to Earth in 2020. The tweet below simulates your eavesdropping on the craft as its tells its MASCOT lander – designed to hop from place to place on Ryugu’s surface – to wake up!

Rise and shine @MASCOT2018 ! It's a new day and we have arrived at #Ryugu! Take a look… #hayabusa2 pic.twitter.com/5erImiqeOi 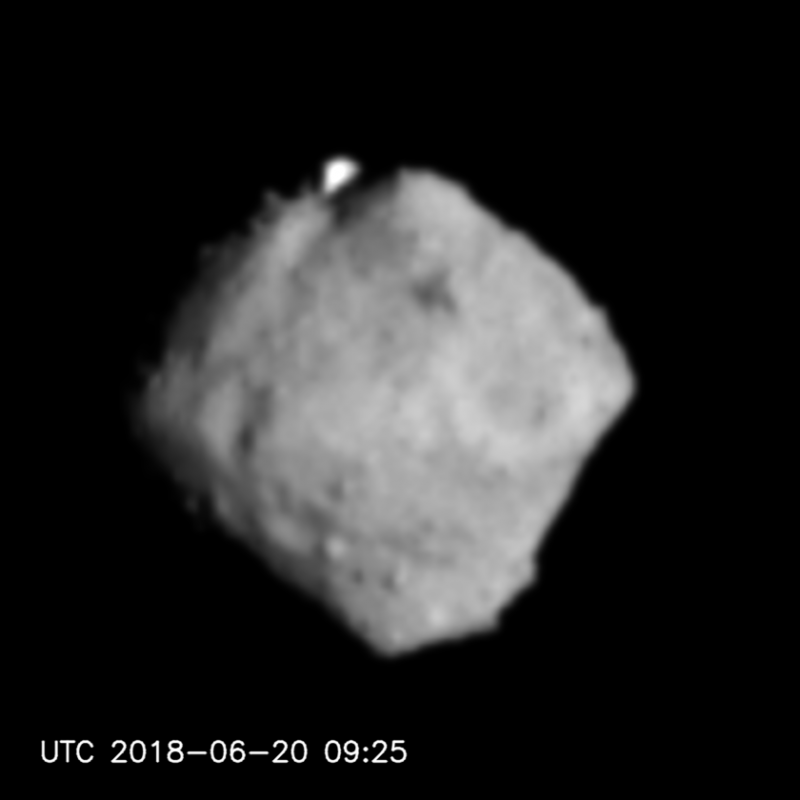 Asteroid Ryugu on June 20, from a distance of 62 miles (100 km). Already you could see the rough diamond shape, craters and boulders, as well as a bright spot near the top point of the diamond. Image via JAXA/University of Tokyo/Kochi University/Rikkyo University/Nagoya University/Chiba Institute of Technology/Meiji University/University of Aizu/AIST.

Notice in the image above that you can see a bright spot near the top point of the diamond (shades of Ceres as the Dawn spacecraft approached it) and what may be an equatorial ridge, something seen elsewhere in the solar system as well, such as on Saturn’s moon Iapetus and several other Saturn moons (Atlas, Pan, Daphnis). 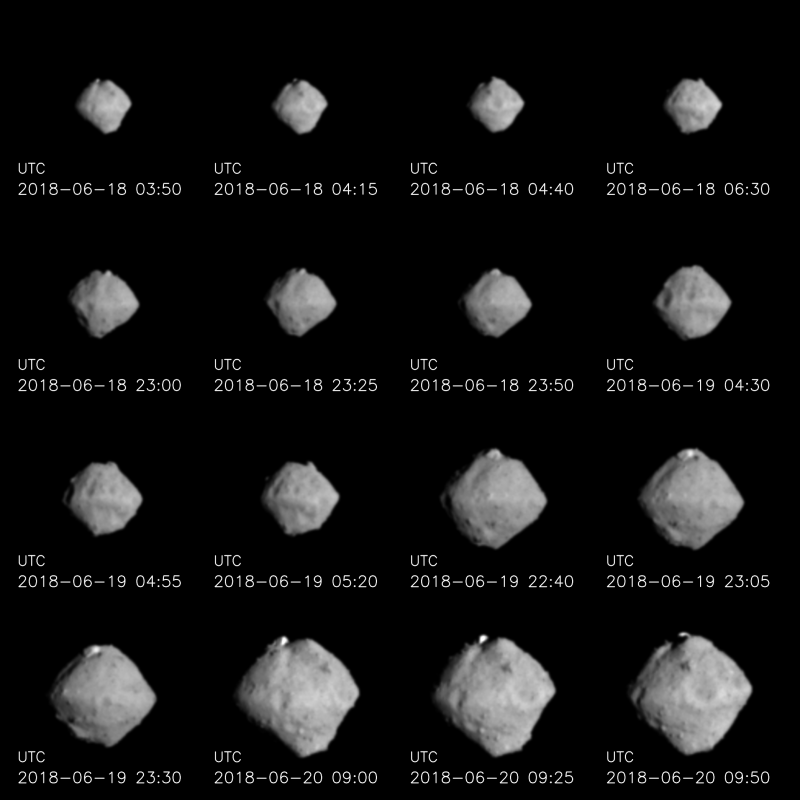 On June 19, Makoto Yoshikawa, the Hayabusa 2 mission manager for JAXA, said in a statement:

When I saw these images, I was surprised that Ryugu is very similar in shape to both the destination of the U.S. OSIRIS-REx mission, asteroid Bennu, and also the target of the previously proposed MarcoPolo-R mission by Europe, asteroid 2008 EV5. Bennu and 2008 EV5 are about half the diameter (and 1/8 the volume) of Ryugu, with rotation periods about half as long. In other words, these celestial bodies are small and rotating fast compared to Ryugu. On the other hand, Bennu is a B-type asteroid, which is very similar to C-type asteroids such as 2009 EV5 and Ryugu. Therefore there should also be common properties due to the asteroid type. So we have both differences and similarities that have combined to produce very similar shapes … why is that? I think this is very interesting. So far, the asteroids we have explored have been different in shape, so Ryugu and Bennu could be the first time two similar-shaped asteroids have been examined. It will be interesting to clarify exactly what this similarity means scientifically. 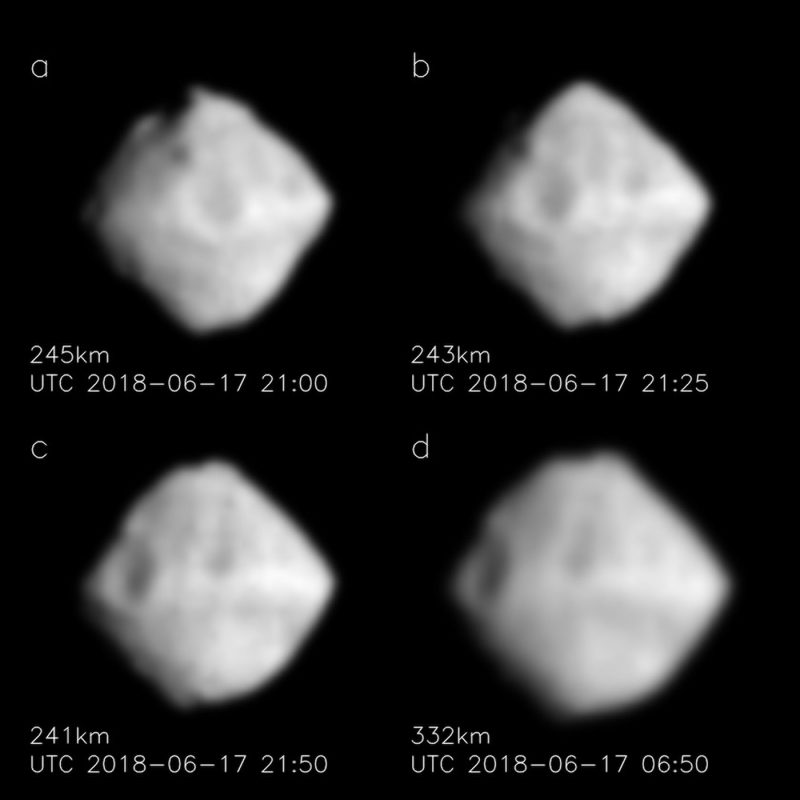 Between this coming September and July of next year, one small lander (called MASCOT-1) and three small rovers (called MINERVA-II) will be deployed to the surface. Before then, however, the spacecraft will need to study the asteroid to find the best landing locations. As Yoshikawa noted:

If the axis of rotation for Ryugu is close to the vertical direction in this image, there is a big advantage as it will be possible to know almost the entire appearance of Ryugu at an early stage after arrival. This makes the project planning easier. However, it is also possible that potential landing sites may be limited to the equator of Ryugu. I hope we can find a suitable place to set down the lander and rovers.

Ryugu is already proving to be an interesting body, as described by optical navigation camera principal investigator Seiji Sugita:

As we approached Ryugu and were able to distinguish individual features in the asteroid’s topology, it became clear that Ryugu has a land of rich terrain. Numerous clusters of rock roll on the surface. Among these, a large rocky mass (about 150m [500 feet] across) stands out on the upper part of Ryugu due to its brighter color (higher reflectivity). The belt-shaped ring of peaks that surround the equator are also slightly brighter than their surroundings. This color difference may reflect a difference in material composition and the size of the particles that form the rock. We can also see many sunken regions that look like craters. These depressions may have been made in collisions with other celestial bodies. A structure that looks like a grove is also visible.

The existence of such varied topographies is an indication that Ryugu has undergone a complex evolutionary history. It is generally believed that small asteroids that are less than .6 miles (1 km), such as Ryugu, were created fairly recently in the solar system’s history (within several hundred million years) during the fragmentation of a larger parent body. Ryugu’s terrain will tell us about the division from the parent body and the asteroid’s subsequent evolution. 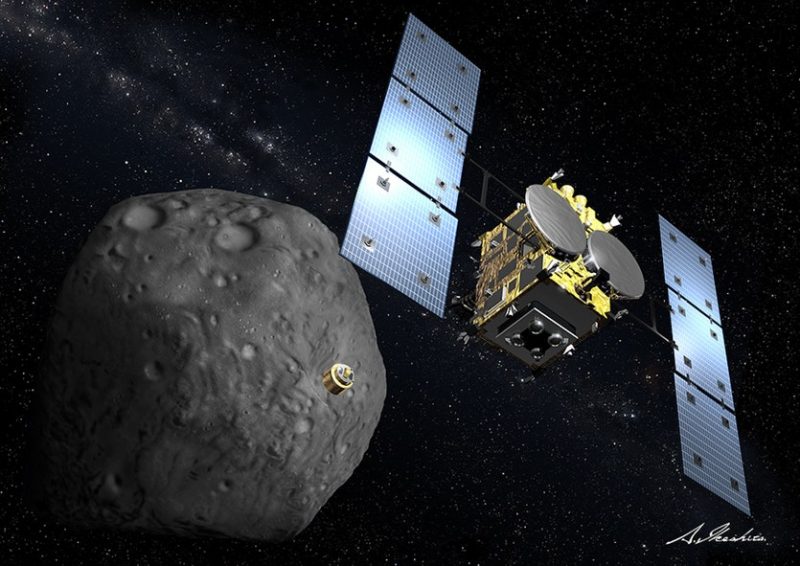 Artist’s concept of Hayabusa 2 at Ryugu. Image via JAXA.

Hayabusa 2 is the second asteroid sample-return mission by JAXA. The first, Hayabusa, was launched in 2003 and arrived at the asteroid Itokawa in 2005. Despite some problems, 1,500 grains of rock from the asteroid were successfully returned to Earth in June 2010. Hayabusa 2 is scheduled to return its samples back to Earth in 2020.

Bottom line: The Japanese spacecraft Hayabusa 2 has arrived at its closest point to near-Earth asteroid Ryugu.

Via JAXA and ESA