An amazing image of a spiral galaxy that lies about 60 million light-years away in the constellation of Eridanus (The River).

This impressive spiral galaxy lies about 60 million light-years away in the constellation of Eridanus (The River). NGC 1187 has hosted two supernova explosions during the last thirty years, the latest one in 2007. 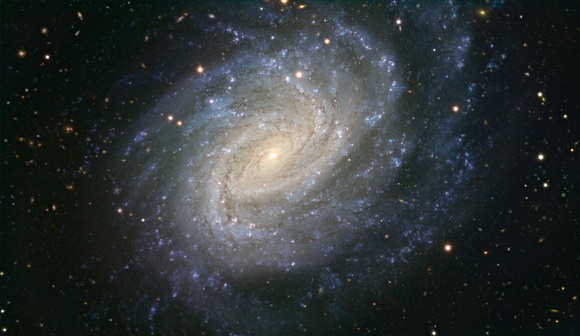 The galaxy NGC 1187 is seen almost face-on, which gives us a good view of its spiral structure. About half a dozen prominent spiral arms can be seen, each containing large amounts of gas and dust. The bluish features in the spiral arms indicate the presence of young stars born out of clouds of interstellar gas.

Looking towards the central regions, we see the bulge of the galaxy glowing yellow. This part of the galaxy is mostly made up of old stars, gas and dust. In the case of NGC 1187, rather than a round bulge, there is a subtle central bar structure. Such bar features are thought to act as mechanisms that channel gas from the spiral arms to the centre, enhancing star formation there.

Around the outside of the galaxy many much fainter and more distant galaxies can also be seen. Some even shine right through the disc of NGC 1187 itself. Their mostly reddish hues contrast with the pale blue star clusters of the much closer object.

NGC 1187 looks tranquil and unchanging, but it has hosted two supernovae explosions since 1982. A supernova is a violent stellar explosion, resulting from the death of either a massive star or a white dwarf in a binary system. Supernovae are amongst the most energetic events in the universe and are so bright that they often briefly outshine an entire galaxy before fading from view over several weeks or months. During this short period a supernova can radiate as much energy as the Sun is expected to emit over its entire life span.