The day Earth smiled, a global moment of cosmic self-awareness

NASA’s Cassini spacecraft will be photographing Earth through the rings of Saturn on Friday, July 19, and – if you’re in the Americas – you can join the shot.

In case you haven’t heard, an interplanetary photo op takes place today (July 19, 2013) that should result in the third-ever photo of Earth from the perspective of an outer planet. Saturn will be in eclipse at the time as seen by the Cassini spacecraft, which has been orbiting Saturn since 2004. Space scientists expect a beatiful image of Saturn and its rings, plus the pale blue dot of Earth. NASA’s Messenger orbiter will also be snapping photos of the Earth and moon, from its vantage point in orbit around the planet nearest our sun.

Carolyn Porco, head of the Cassini mission’s imaging team, and others on the Cassini team want you to participate in this event. Porco calls it:

… a global moment of cosmic self-awareness.

All you have to do, as Cassini cameras are trained our way, is smile.

The time for the cosmic smile toward Saturn will be a 15-minute interval that begins at 5:27 p.m. EDT, 4:27 CDT, 3:27 MDT, 2:27 p.m. PDT (21:27 UTC). Beginning then, and for 15 minutes, the light reflected by your smile and wave will make the journey from Earth to Saturnian orbit – a journey of nearly 1 billion miles – in time to be captured by Cassini’s camera about 80 minutes later.

See the first two photos of Earth from Saturn, here. 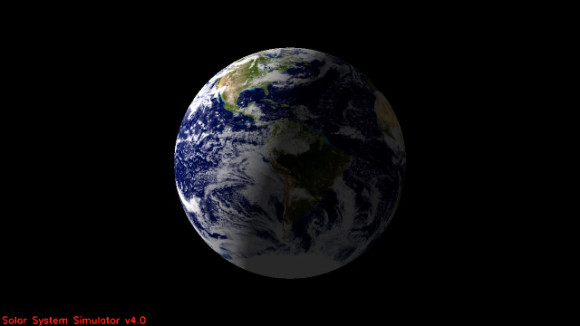 North America and part of the Atlantic Ocean are expected to be illuminated when NASA’s Cassini spacecraft takes a snapshot of Earth on July 19, 2013. This view is a close-up simulation. Image via NASA/JPL-Caltech

Cassini has photographed Earth before, but this will be the first time Earthlings know in advance their picture will be taken from a billion miles away. We hope that people around the world will go outside to wave at Saturn while the photo-shoot is underway.

From New York City, Saturn will be low on the eastern horizon from 5:27 to 5:42 p.m. EDT on July 19, 2013. Saturn’s approximate location is shown, but it will not be not visible in the daylight. Image via NASA.

From Chicago, Saturn will be low on the eastern horizon from 4:27 to 4:42 p.m. CDT on July 19, 2013. Saturn’s approximate location is shown, but it will not be not visible in the daylight. Image via NASA.

From Los Angeles (and western states), Saturn will be even lower on the eastern horizon from 2:27 to 2:42 p.m. PDT on July 19, 2013. Saturn’s approximate location is shown, but it will not be not visible in the daylight. Image via NASA.

Cassini has been orbiting Saturn since 2004. So why are photos of Earth from Saturn so rare? Most of the time, when Cassini looks toward Earth, it is also looking toward our solar system’s central sun. The sun’s light drowns Earth from view. On July 19, circumstances will be such that, from Cassini’s point of view, the body of Saturn will eclipse the sun. Saturn’s rings will appear magnificently backlit. Earth will appear as a tiny blue speck just outside the E ring.

Saturn eclipsing the sun, as seen by Cassini spacecraft in 2006. More about this image. Credit: CICLOPS, JPL, ESA, NASA

The Americas will be facing Saturn at the time of the image. For North Americans, the event happens in broad daylight, so the best way to participate is to go outside, face east, and wave at the blue sky. You won’t be able to see Saturn, but it is there.

After nightfall, look for Saturn in the southwestern sky, not far from the bright star Spica in the constellation Virgo. Saturn is easily visible to the eye. You need a telescope to see Saturn’s rings. Image via NASA.

Can you see Saturn at night now, by the way? You surely can. By nightfall, Saturn will have moved into the southwestern sky. It’ll pops out in the twilight, a slightly-golden pinprick about twice as bright as the sky’s brightest stars. As it’s been for a couple of years now, Saturn appears near on the sky’s dome to the bright star Spica in the constellation Virgo. Just don’t mistake Venus for Saturn. Venus is much, much brighter and low in the west after sunset.

Seeing the whole mosaic of the backlit rings when it is put together will be incredible. We will be looking for changes in Saturn’s faint rings, especially the E ring, from the mosaic we took back in 2006.

It will be a day to celebrate life on the Pale Blue Dot.

Bottom line: Today, NASA’s Cassini spacecraft will be photographing Earth through the rings of Saturn. It’ll be the third-ever photo of Earth taken from the outer solar system, and you can join the shot. The time is Friday, July 19 @ 2:27 p.m. PDT (5:27 P.M. EDT). NASA has already accounted for the light-travel time to Saturn, so don’t worry about it. Go outside and add your photons to the portrait of Earth that will be created by NASA’s Cassini spacecraft, now orbiting Saturn. For more information, Carolyn Porco’s website The Day Earth Smiled. It’s on Facebook at https://www.facebook.com/events/650683051626720/. And follow the event or express how you feel about it on Twitter, #DayEarthSmiled.