Galaxies are massive and beautiful islands of stars. But did you know that most galaxies are surrounded by halos? A complex instrument on the Very Large Telescope is giving astronomers new views of these galactic rings of light. 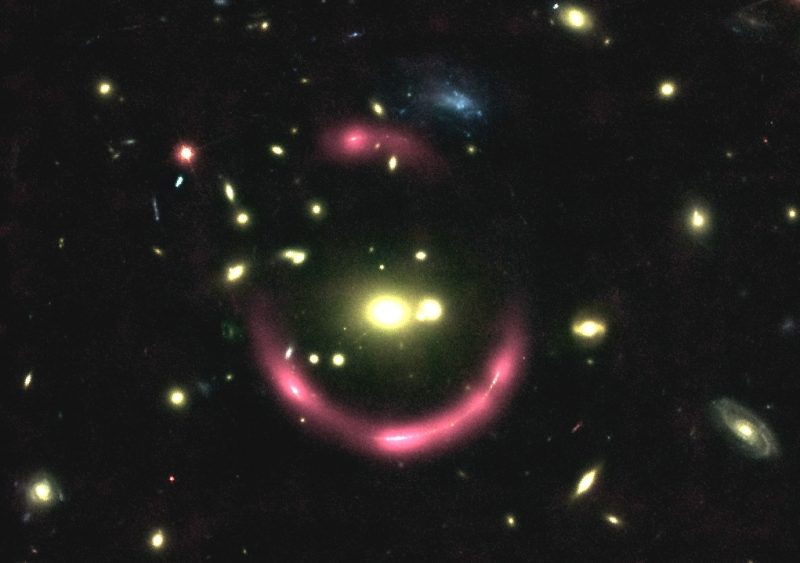 A galactic halo, or corona, stands out as an ethereal glowing ring in this image from the Hubble Space Telescope. The image shows a magnified galaxy, due to the gravitational lensing effect, behind a massive galaxy cluster. Image via ESO/NASA/ESA/A.Claeyssens/EWASS.

When we think of galaxies, we think of huge disks of billions of stars, dust and gas. Many are reminiscent of giant pinwheels. With the right instruments, though, astronomers can see more: halos of light, composed of neutral hydrogen, around galaxies. On June 24, 2019, the Centre de Recherche Astrophysique de Lyon announced that its researchers have made new observations of distant galactic halos – sometimes called galactic coronae – using the MUSE instrument on ESO’s Very Large Telescope in Chile. The astronomers said MUSE sees halos around almost all distant galaxies it observes, but even then they are generally too small to show much detail or structure. To help with this, the new study combined the MUSE observations with what’s called gravitational lensing to study the halos in more detail.

The images and other data were presented at the annual meeting of the European Astronomical Society (EWASS 2019) in Lyon, France, on June 25. Over 1,200 astronomers gathered for the meeting. 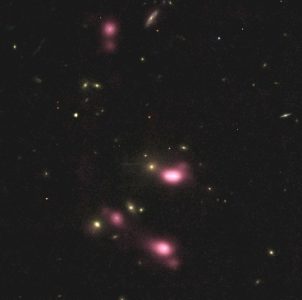 Another partial galaxy halo in a Hubble Space Telescope image. As in the image above, the image shows a magnified galaxy, due to the gravitational lensing effect, behind a massive galaxy cluster. Image via ESO/NASA/ESA/A.Claeyssens/EWASS.

Indeed, massive clusters have the property to bend light rays passing through their center, as predicted by Einstein. This produces the effect of a magnifying glass: the images of background galaxies are magnified.

There are two primary observations that the MUSE instrument has been able to conduct of halos so far.

The first is where the halo appears as an almost complete ring of light encircling a galaxy. MUSE can focus in on the ring enough to study how gases vary across parts of the halo. Until now, that has been difficult to accomplish, and the data tells astronomers how homogenous the gases in the halos are and in what manner they move around the galaxy.

Secondly, the unique way in which MUSE data is combined with the gravitational lensing effects provides more clues as to how galaxies formed in the early universe. 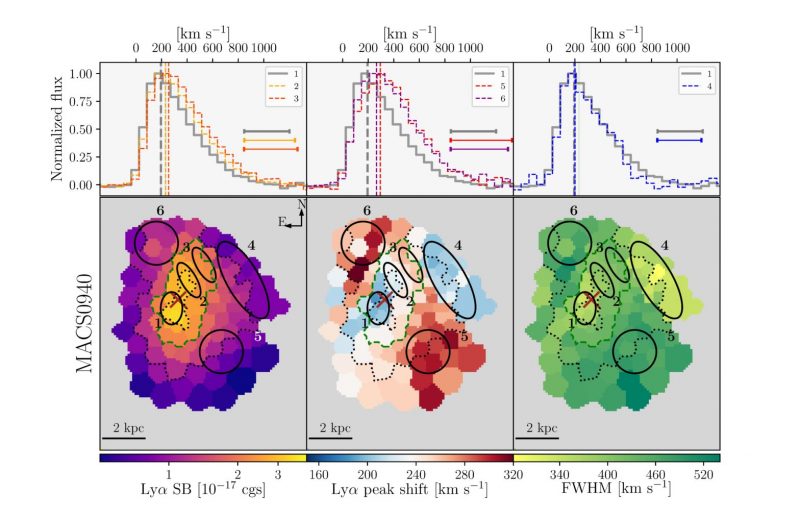 Here’s an example of a map of how a galactic halo’s hydrogen gas might structure itself around a galaxy. The new MUSE observations let astronomers see significant variations of the gas properties across a halo. They said the results enable them “to study in detail [a halo’s] complex structure and the physical process at play.” Image via ESO/Claeyssens/EWASS.

Galactic halos have also been observed with the Hubble Space Telescope, producing some of the images on this page. In 2015, it was reported that galactic halos are more common than had previously been thought.

These halos can also be observed in the radio spectrum, such as with the Karl G. Jansky Very Large Array (VLA) near Socorro, New Mexico. VLA observed the halos of 35 galaxies in 2015. Astronomers say that studying galactic halos with radio telescopes lets them probe a whole range of associated phenomena, including the rate of star formation within the disk, the winds from exploding stars, and the nature and origin of the galaxies’ magnetic fields. 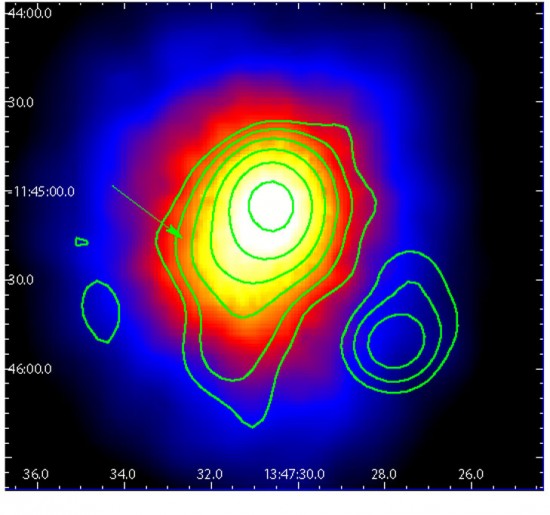 This is a traditional radio image of a galactic halo, in this case, of the mini-halo in the Perseus galaxy cluster. Image via Caltech. Read more about this image.

Meanwhile, the astronomers in Lyon said the MUSE instrument on the Very Large Telescope produces more detail than ever before. MUSE is a highly specialized instrument, according to Fernando Selman, Instrument Scientist:

MUSE has been built with the intention of studying the content and processes going on in the very early universe, when the first stars and galaxies were forming. Closer in time and space, MUSE will map the dark matter distribution in clusters of galaxies using the gravitational microlensing effect on background galaxies. MUSE will also provide detailed information about the internal dynamics of many classes of galaxies with unprecedented detail. It has already been used to study the Sombrero Galaxy in Virgo, and, in the same cluster, a recently discovered new type of object — a galaxy being destroyed after falling into the cluster and encountering the cluster’s hot gaseous corona.

The findings from MUSE and other observations show how, as is often the case in astronomy, there can be more than initially meets the eye. Galaxies are beautiful enough on their own, but seeing their glowing halos makes them even more so. 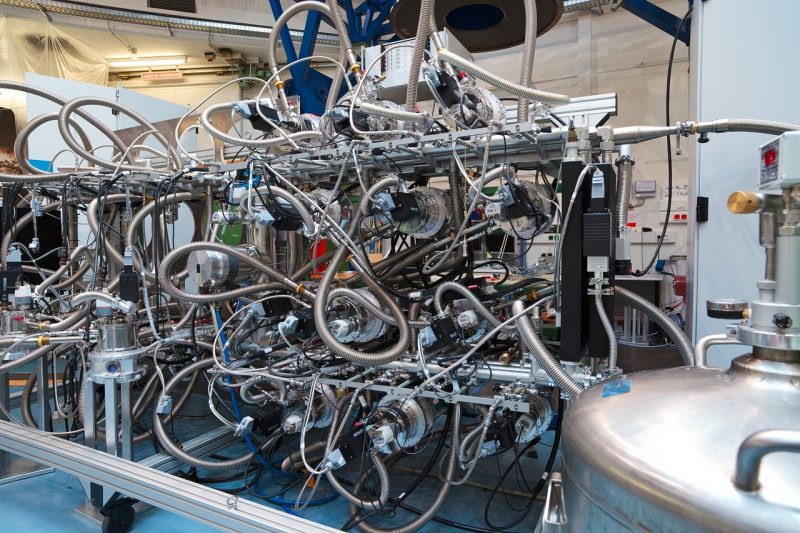 Bottom line: Thanks to advanced instrumentation like MUSE, astronomers can now get better views not only of distant galaxies, but also the lesser-known halos of light that surround them.