Astronomers studied 35 galaxies with a newly upgraded radio telescope in New Mexico to learn more about galactic halos. This study confirms a 1961 prediction. 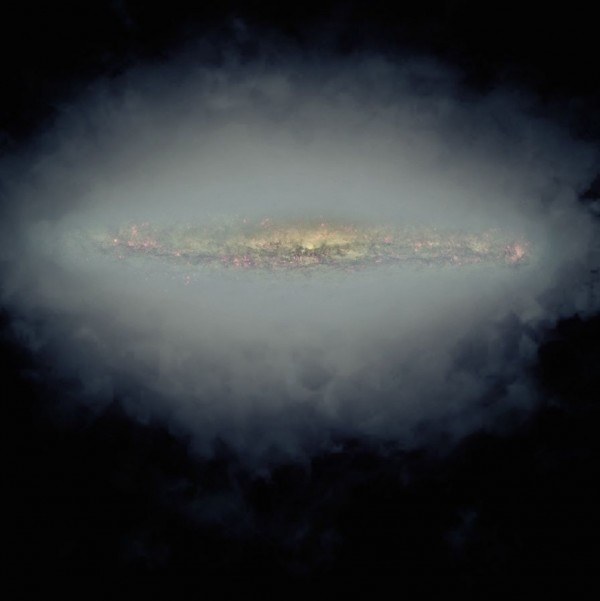 Composite image of an edge-on spiral galaxy with a radio halo. The large, grey-blue area is the combined radio halos of 30 different galaxies. At the center is a visible-light image of one of the galaxies, NGC 5775. Image via Jayanne English, Judith Irwin and Theresa Wiegert; CHANG-ES consortium; NRAO/AUI/NSF; NASA/STScI

Most of the light and radio waves seen from distant spiral galaxies come from objects in the galaxies’ flat disks. That’s where most of the stars, dust and gas of a spiral galaxy resides. Learning about the environment above and below galaxy disks hasn’t been easy, but this week an international team of astronomers announced the results of a new study, made possible by a decade-long upgrade of one of the world’s most famous radio telescopes. These astronomers studied 35 nearby edge-on galaxies to learn that so-called radio halos – believed to be created by cosmic rays and magnetic fields above and below the galaxies’ disks – are much more common than previously thought.

Astronomers knew that radio halos existed. They first discovered them in 1959, and this work confirms a 1961 prediction. The halos themselves can’t be seen in visible light; they are large-scale areas of radio emission.

The astronomers involved in this study used the Karl G. Jansky Very Large Array (VLA) near Socorro, New Mexico. This telescope recently underwent a decade-long upgrade, which lets it now detect radio emission much fainter than ever before. Astronomer Judith Irwin of Queen’s University in Canada – leader of the project – said in an October 13, 2015 statement from VLA:

We knew before that some halos existed, but, using the full power of the upgraded VLA and the full power of some advanced image-processing techniques, we found that these halos are much more common among spiral galaxies than we had realized.

The astronomers in this project – which is called CHANG-ES – had the goals of investigating how often radio halos occur among galaxies. They also want to understand how the halos interact with the visible disks of their galaxies. They didn’t answer all the questions, but say this new study is a first step in opening up a whole new field of investigation.

The astronomers say that studying galactic halos with radio telescopes will let them probe a whole range of phenomena, including the rate of star formation within the disk, the winds from exploding stars, and the nature and origin of the galaxies’ magnetic fields.

Along with the report on their findings released this week, the astronomers also are making their first batch of specialized VLA images available to other researchers. The data are available at: https://queensu.ca/changes 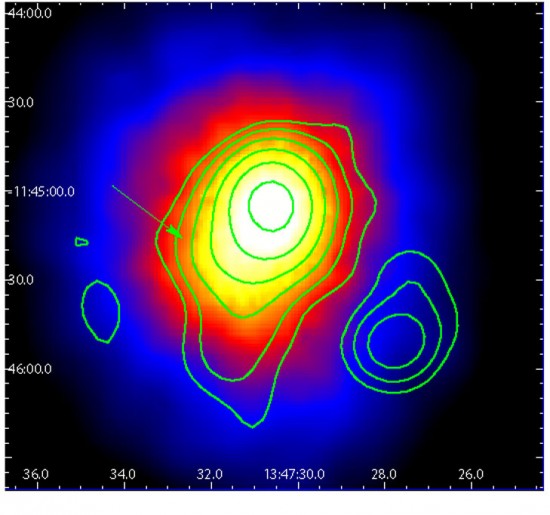 This is a traditional radio image of a galactic halo, in this case, of the mini-halo in the Perseus galaxy cluster. Read more about this image.

Bottom line: Astronomers studied 35 nearby galaxies with a newly upgraded radio telescope in New Mexico to learn that halos of cosmic rays and magnetic fields – above and below the disks of galaxies – are much more common than they had thought.