Triton is Neptune’s largest moon. It’s a bizarre and geologically active world – a possible ocean moon – visited by Voyager 2 in 1989. Now, NASA has proposed a new mission called Trident to sweep past Triton again in 2038. 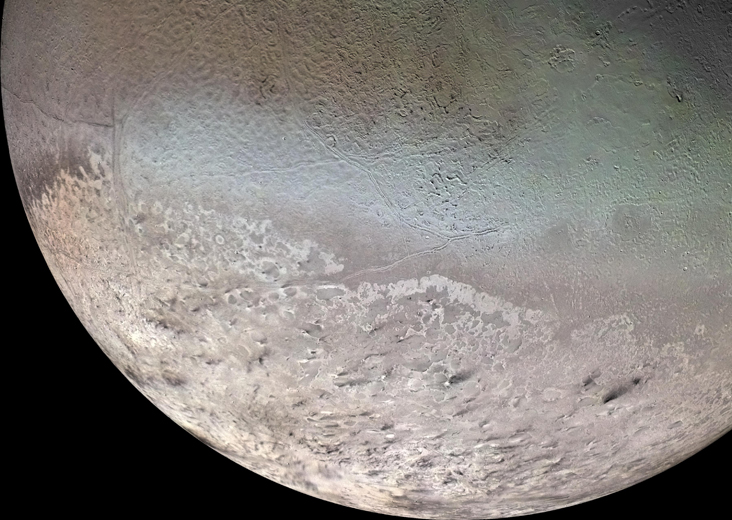 Neptune’s largest moon Triton as seen by Voyager 2 during its flyby in 1989. The south polar cap – with its nitrogen geysers – is in the bottom portion of this image and Triton’s famous “cantaloupe terrain” is at the top. Image via NASA/JPL/USGS.

Over the past few decades, robotic missions to the outer solar system have shown that water worlds seem to be quite common. We’ve seen multiple moons with an icy surface crust and, scientists believe, a liquid water ocean below. Jupiter’s moon Europa and Saturn’s moons Enceladus and Titan are among the most intriguing of these water moons. Even Pluto might have a subsurface ocean and evidence suggests that the dwarf planet Ceres had one as well, in the past.

But there’s another compelling world that hasn’t been visited again yet for decades – and should be – according to NASA. That is Neptune’s largest moon Triton. On March 19, 2019, at the Lunar and Planetary Science Conference 2019 (LPSC 50), NASA announced a proposed flyby mission called Trident to investigate whether Triton does, as suspected, have a subsurface ocean, an ocean with the potential for habitability.

The flyby, similar to the New Horizons flyby of Pluto in 2015, would occur in 2038. The proposal is outlined in two papers, available here and here.

The mission, if approved, would be part of NASA’s Discovery Program, which supports lower-cost missions for under $500 million. Those missions are launched every two years, with the InSight lander on Mars being the most recent. 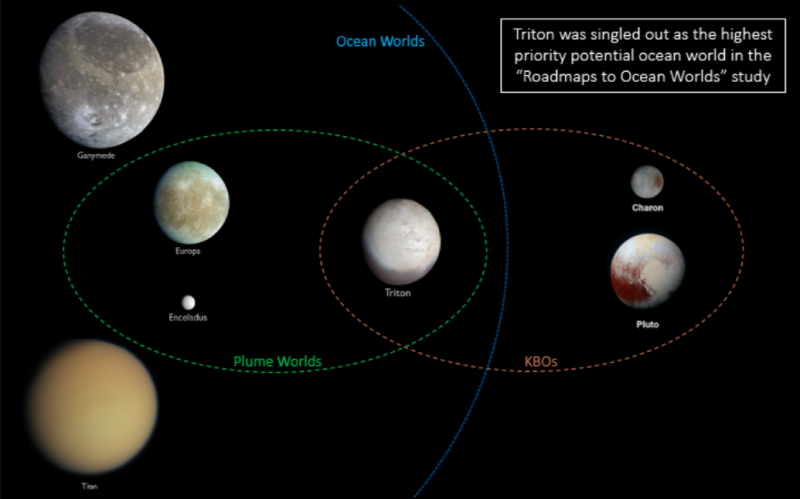 Titan is one of many known and suspected ocean worlds. It is also 1 of 3 bodies known or thought to have active cryovolcanic plumes, and is believed to be a captured Kuiper Belt Object (KBO). Image via L. M. Prockter et al./LPSC/USRA/JPL/SwRI.

A flyby mission would be a good way to determine if Triton’s ocean is really there and to get a good idea as to what the conditions are like without having to spend a lot more money on a flagship mission such as Cassini, which explored Saturn and its moons from 2004 until 2017. As explained by Louise Prockter, director of the Lunar and Planetary Institute (LPI) in Houston and the principal investigator of the proposed mission:

The time is now to do it at a low cost. And we will investigate whether it is a habitable world, which is of huge importance.

Such a mission would be well-equipped to examine Triton’s unique surface features and assess the habitability of the ocean below. The mission concept, as outlined in one of the papers at LPSC:

We have identified an optimized solution to enable a New Horizons-like fast flyby of Triton in 2038 that appears at this preliminary stage to fit within the Discovery 2019 cost cap. The mission concept uses high heritage components and builds on the New Horizons concepts of operation. Our overarching science goals are to determine: (1) if Triton has a subsurface ocean; (2) why Triton has the youngest surface of any icy world in the solar system, and which processes are responsible for this; and (3) why Triton’s ionosphere is so unusually intense. If an ocean is present, we seek to determine its properties and whether the ocean interacts with the surface environment. Trident will pass within 500 km of Triton, inside its atmosphere, imaging the surface, sampling its ionosphere, and getting sufficiently close as to permit highly detailed magnetic induction measurements. Passage through a total eclipse makes possible atmospheric occultations. Trident’s focus on the internal structure, surface geology, organic processes, and atmospheric characteristics of Triton closely align with key priorities established in the NRC 2013 Planetary Decadal Survey and the NASA 2018 Roadmaps to Ocean Worlds white paper.

According to Amanda Hendrix of the Planetary Science Institute (PSI) in Tucson, Arizona, and a leader of the Roadmap study:

Triton shows tantalizing hints at being active and having an ocean. It is a three-for-one target, because you can visit the Neptune system, visit this interesting ocean world, and also visit a Kuiper Belt Object without having to go all the way out there.

Along the way, Trident would also visit Venus and Jupiter’s moon Io – the most volcanically active body in the solar system. Although the current Juno orbiter has been able to view Io from a distance, the moon hasn’t been studied up close since the Voyager 2 mission in 1979. The last time that Triton was observed by a spacecraft was in 1989, also by Voyager 2. Although “only” a flyby as well, the Trident mission would be much more advanced than Voyager 2, according to Karl Mitchell, proposed project scientist for the mission, speaking to The New York Times:

We are comparing with the Voyager encounter in 1989, which was built on early 1970s technology, essentially a television camera attached to a fax machine. 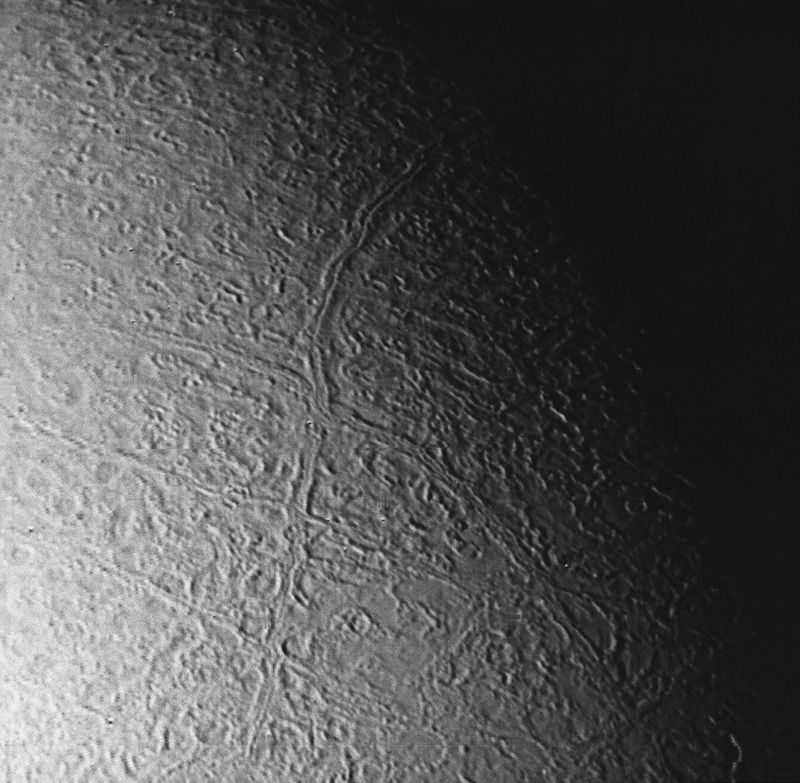 A closer view of Triton’s “cantaloupe terrain.” Image via NASA/JPL/Wikipedia. 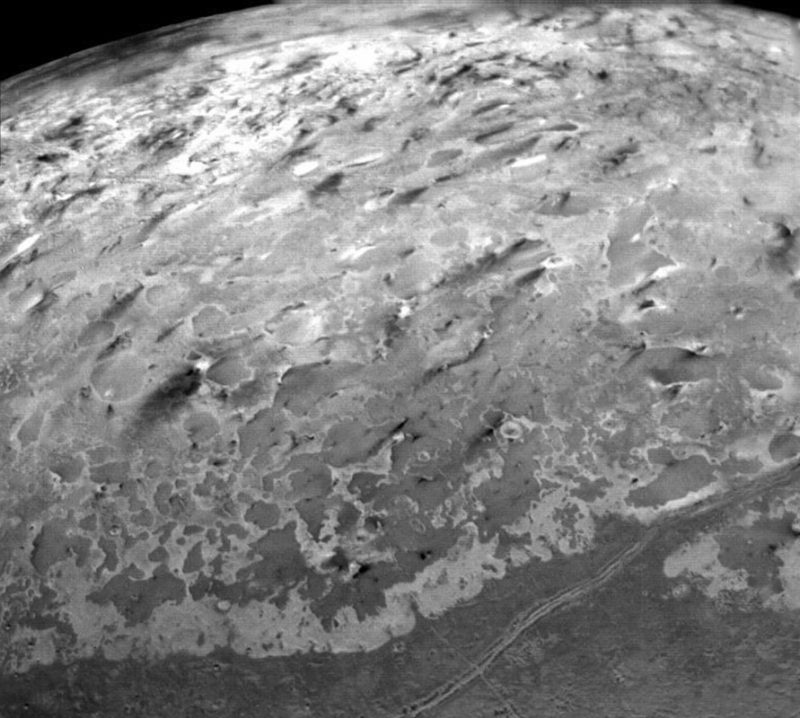 Dark plumes from nitrogen geysers on Triton. Image via NASA/JPL. 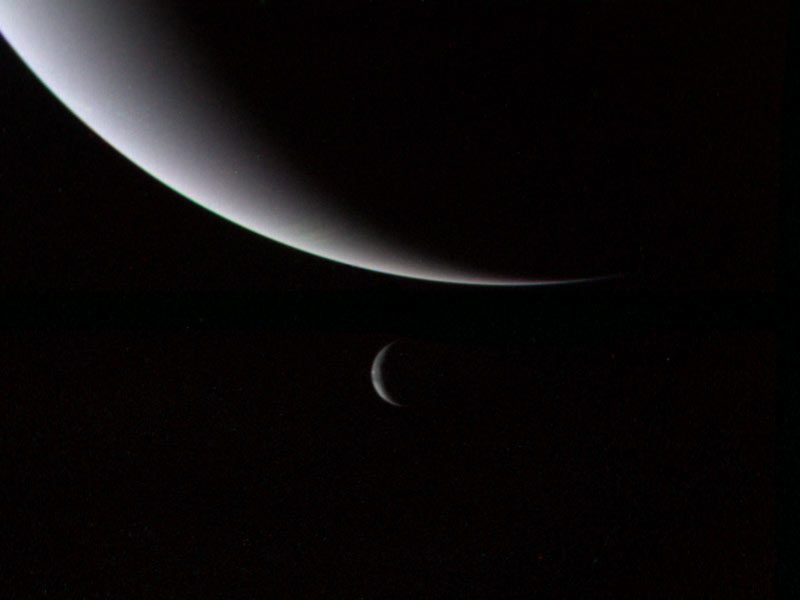 Even apart from the possible ocean, Triton is a fascinating and active world, with geyser-like cryovolcanoes venting dark plumes of nitrogen gas, tectonic “cantaloupe terrain,” few craters and a tenuous nitrogen atmosphere. It is so cold on the surface, -391 degrees Fahrenheit (-235 degrees Celsius), that most of its nitrogen condenses on the surface as frost. It is also the only large moon – 1,680 miles (2,700 kilometers) in diameter – to orbit in the opposite direction of its planet’s rotation. Like our own moon, it is in synchronous rotation, keeping one side always facing Neptune.

Triton was discovered on October 10, 1846, by British astronomer William Lassell, just 17 days after Neptune itself was discovered. Triton was named after the son of Poseidon, the Greek god comparable to the Roman Neptune.

Bottom line: As a possible ocean moon, Triton is a tantalizing destination for future robotic missions. If approved, Trident would be the first spacecraft to explore this mysterious world in decades. What new surprises are waiting to be discovered?

Source: Implementation of Trident: A Discovery-Class Mission to Triton

Via The New York Times