Io is small, but it’s the most volcanically active world in our solar system. It has hundreds of active volcanoes. Now the Juno spacecraft has found one more. 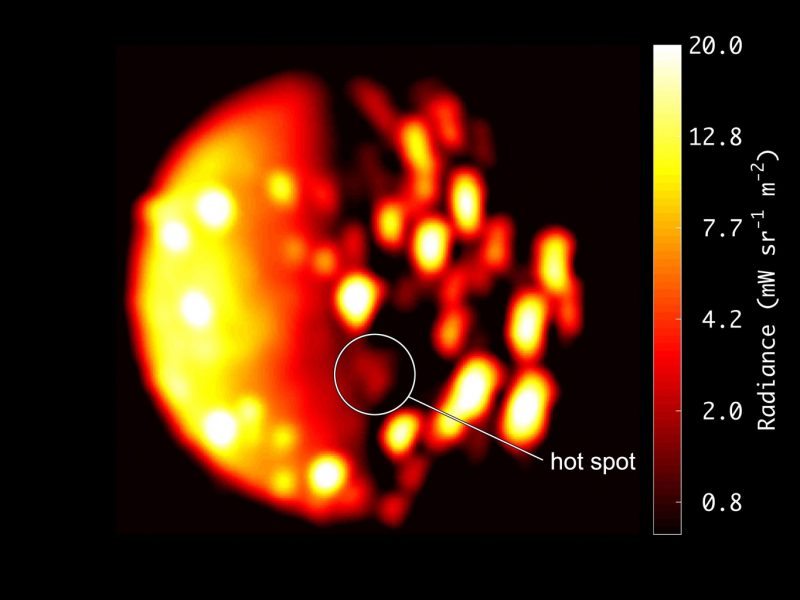 When it comes to volcanoes, we naturally tend to think of big eruptions like the recent ones in Hawaii or Mount St. Helens in Washington state, best known for its major 1980 eruption. Earth is a volcanically active planet, but there is another place in the solar system even more active, and that is Jupiter’s moon Io. In fact, Io is the most volcanically active body in the whole solar system, as far as we know. Space scientists have discovered more than 400 volcanoes on Io so far, with about 150 erupting at any given time, and now scientists think they’ve discovered yet another one, announced on July 13, 2018.

The possible new volcano was found in data sent back by NASA’s Juno spacecraft, which is currently orbiting Jupiter. Although Juno’s mission focuses on Jupiter itself, it can sometimes observe some of the moons also, from a distance. On December 16, 2017, Juno’s Jovian InfraRed Auroral Mapper (JIRAM) instrument discovered a new heat source close to the south pole of Io that might be an undiscovered volcano. Juno was about 290,000 miles (470,000 km) away from Io at the time. As explained by Alessandro Mura, a Juno co-investigator from the National Institute for Astrophysics in Rome:

The new Io hotspot JIRAM picked up is about 200 miles (300 km) from the nearest previously mapped hotspot. We are not ruling out movement or modification of a previously discovered hot spot, but it is difficult to imagine one could travel such a distance and still be considered the same feature. 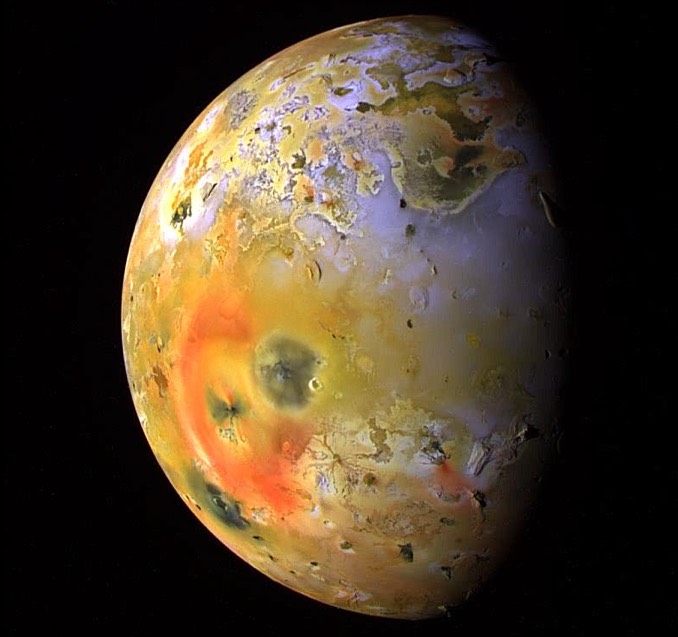 Colorful Io as seen by the Galileo spacecraft in 1997. Image via NASA/JPL/University of Arizona.

The Voyagers 1 and 2, Galileo, Cassini and New Horizons spacecraft, as well as ground-based observatories, all have seen Io’s volcanoes. Why is Io such a volcanically active world? According to NASA:

Io’s surface is covered by sulfur in different colorful forms. As Io travels in its slightly elliptical orbit, Jupiter’s immense gravity causes ‘tides’ in the solid surface that rise 300 feet (100 meters) high on Io, generating enough heat for volcanic activity and to drive off any water. Io’s volcanoes are driven by hot silicate magma.

In other words, Jupiter’s gravity squeezes Io – which is the innermost of the four large Galilean satellites – like a rubber ball. The squeezing results in volcanoes.

Even the New Horizons spacecraft, en route to Pluto, caught a glimpse of Io’s volcanoes. This image show a giant plume from the Tvashtar volcano. Image via NASA. 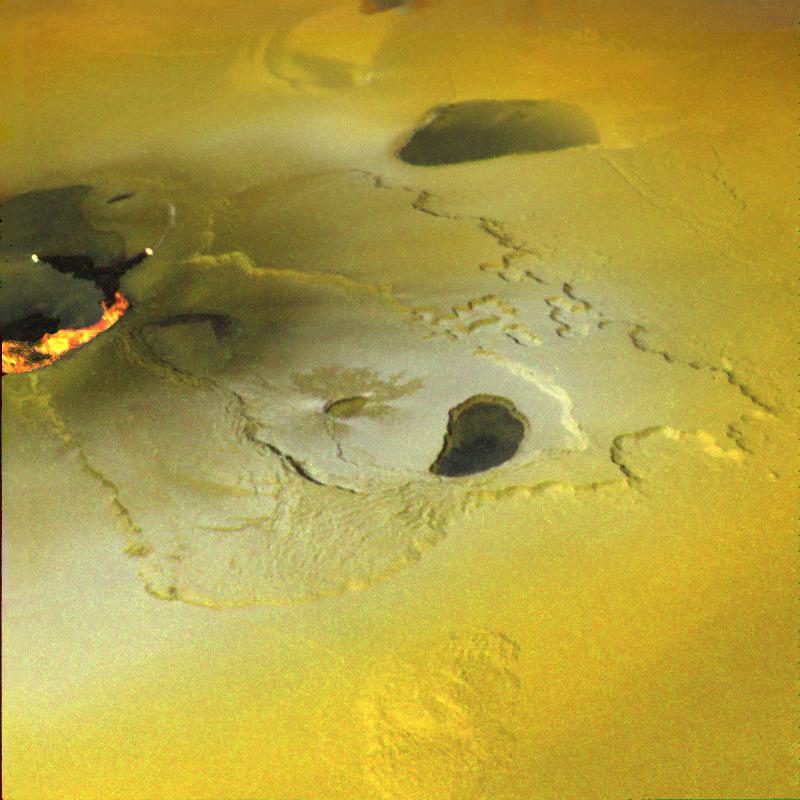 Close-up view of one of Io’s volcanoes, as seen by the Galileo spacecraft on February 22, 2000. Image via NASA/JPL. 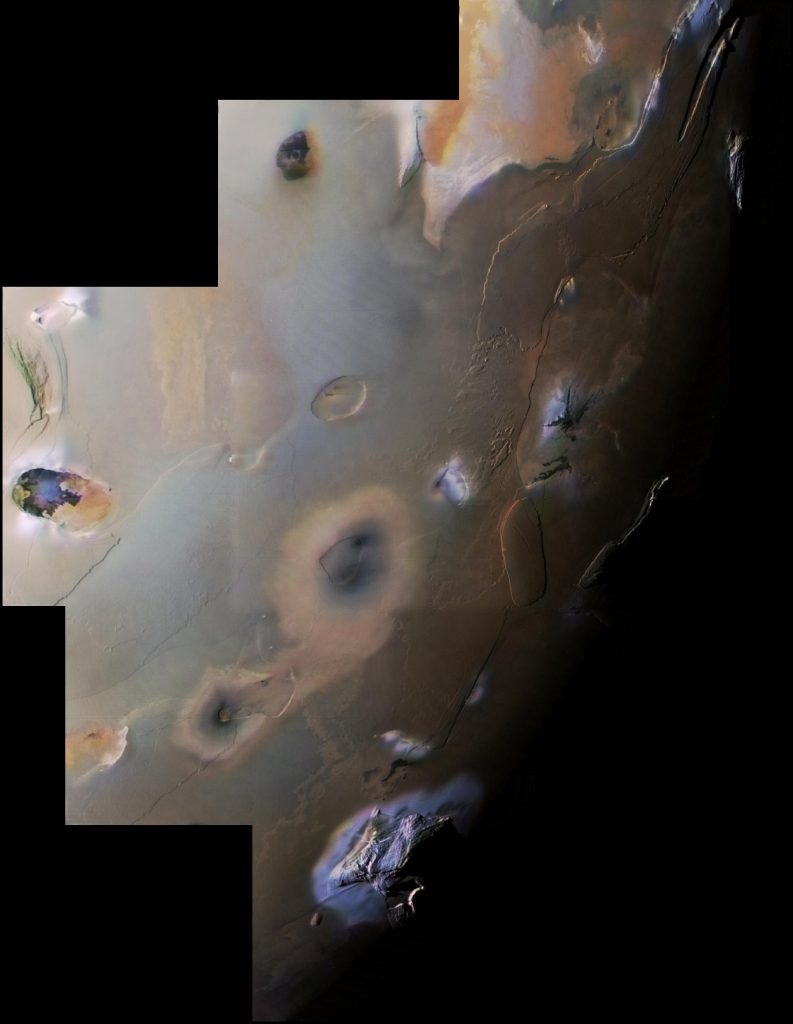 Io’s sulfuric volcanic plumes can reach up to 250 miles (400 km) high or higher, putting on an incredible ongoing display. In contrast, the highest Mount St. Helens plume on May 18, 1980 reached about 19 miles (31 km), and the highest plume from Mount Pinatubo in the Philippines – known for its powerful 1991 eruption – got as far as 27 miles (45 km). So you see Io’s volcanoes really are explosive! Learn why at this article at Wired.

Io’s volcanic activity is so extensive that it can resurface the entire surface of this Jovian moon in only about a million years. The volcanic activity is the result of tidal heating, where the moon is “stretched” by Jupiter’s strong gravitational pull as well as the lesser gravitational effects of the other satellites. Io also has mountains, some of which are as tall as our earthly Mount Everest even though Io itself is a much smaller world than Earth.

In 2013, it was announced that Io’s volcanos are not concentrated where scientists thought they would be, and are shifted eastward for some reason. According to Christopher Hamilton of the University of Maryland, College Park, lead author of a paper about this research published January 1, 2013, in Earth and Planetary Science Letters:

Our analysis supports the prevailing view that most of the heat is generated in the asthenosphere, but we found that volcanic activity is located 30 to 60 degrees east from where we expect it to be. We performed the first rigorous statistical analysis of the distribution of volcanoes in the new global geologic map of Io. We found a systematic eastward offset between observed and predicted volcano locations that can’t be reconciled with any existing solid body tidal heating models. 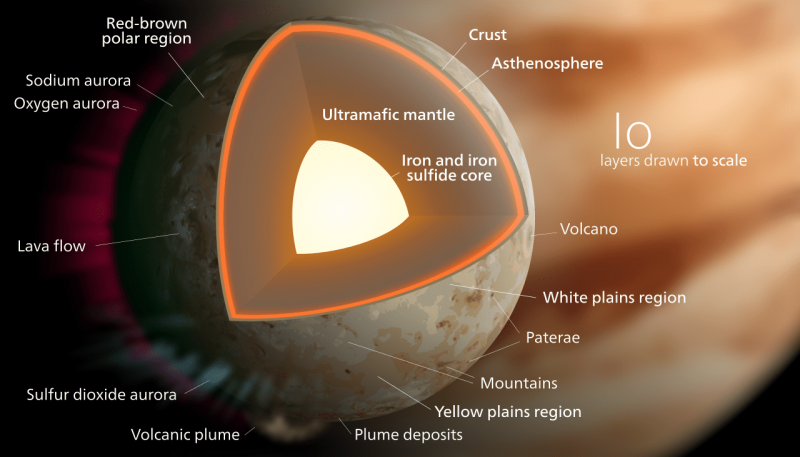 Model of the possible interior composition of Io and various surface features. Image via Wikipedia Commons/Kelvinsong.

Juno will continue to monitor Io periodically during the rest of its mission, until at least July 2021.

Bottom line: Io is the most volcanically active body in the solar system, with over 400 volcanoes discovered so far and about 150 erupting at any given time. Now, NASA’s Juno spacecraft has discovered what appears to be yet another volcano on Io, with many more likely waiting to be found.