Astronomers have found the fastest spinning star ever discovered. The hot blue giant rotates at one million miles per hour, or 100 times faster than our sun.

Astronomers have found the fastest spinning star ever discovered. The hot blue giant rotates at a dizzying 1 million miles per hour, or 100 times faster than our sun does. The star is very close to the point at which it would be torn apart due to centrifugal forces if it spun any faster. 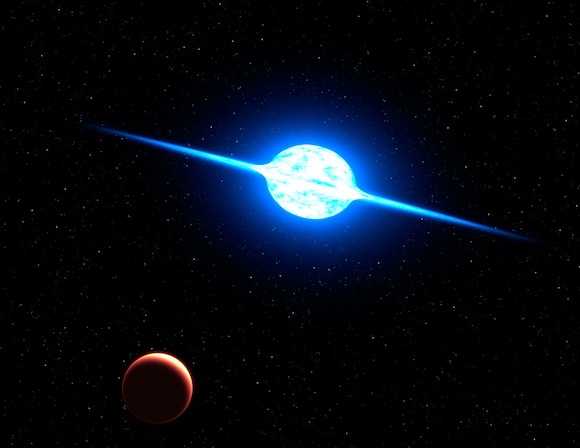 This is an artist’s concept of the fastest rotating star found to date. The massive, bright young star, called VFTS 102, rotates at a million miles per hour, or 100 times faster than our Sun does. Centrifugal forces from this dizzying spin rate have flattened the star into an oblate shape and spun off a disk of hot plasma, seen edge on in this view from a hypothetical planet. Image Credit: NASA, ESA, and G. Bacon (STScI)

The massive, bright young star, called VFTS 102, lies in a neighboring dwarf galaxy, the Large Magellanic Cloud, about 160,000 light-years from Earth. Astronomers think that it may have had a violent past and has been ejected from a double star system by its exploding companion.

An international team of astronomers discovered the star using the European Southern Observatory’s Very Large Telescope at the Paranal Observatory in Chile.

The astronomers also found that the star, which is around 25 times the mass of the sun and about one hundred thousand times brighter, was moving through space at a significantly different speed from its neighbors.

Philip Dufton of Queen’s University Belfast, Northern Ireland, United Kingdom, is lead author of the paper in the Astrophysical Journal Letters presenting the results. He said:

The remarkable rotation speed and the unusual motion compared to the surrounding stars led us to wonder if this star had an unusual early life. It was suspicious. 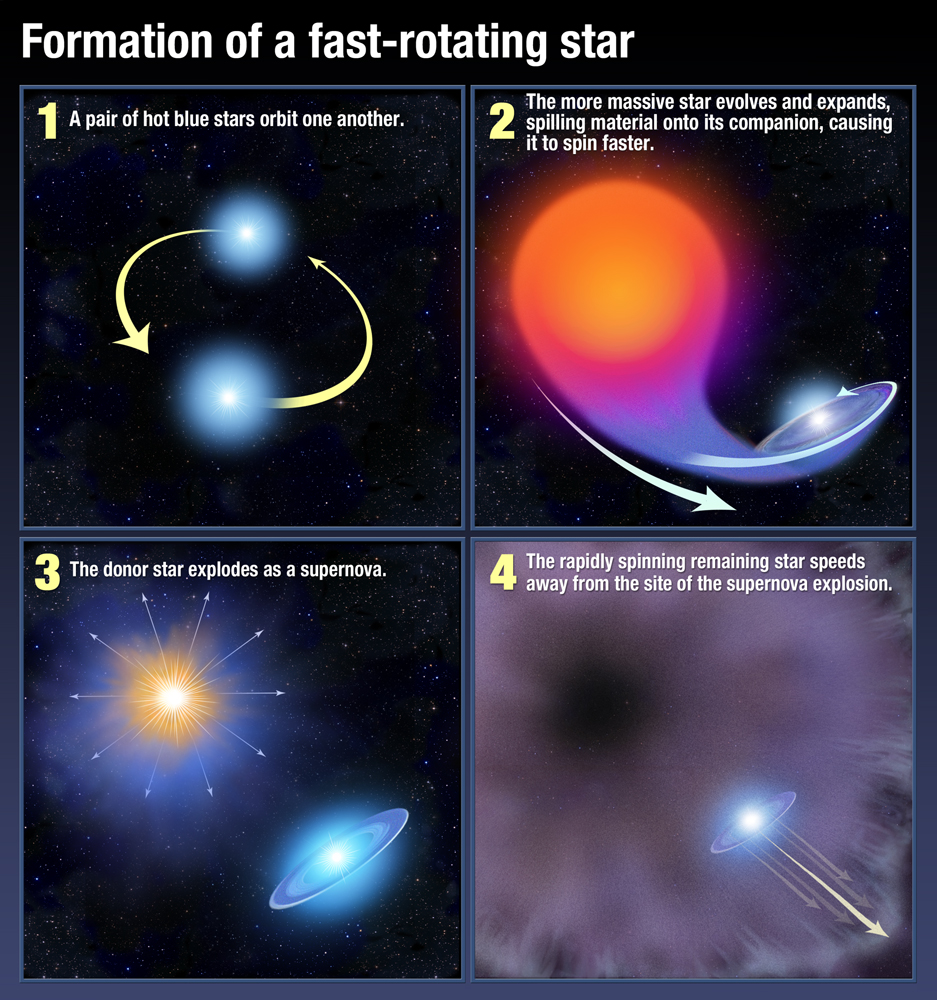 This diagram shows one theory for the creation of the fastest spinning star found to date. The more massive star was once a member of a binary pair. Its rapidly aging companion star evolves and expands, spilling material onto the less evolved star. The star robbed angular momentum from the donor star and spun up to a rotation speed of 1 million miles per hour. The donor star explodes as a supernova and propelled the surviving star away Image credit:it: NASA, ESA, and A. Feild (STScI)

This difference in speed could imply that VFTS 102 is a runaway star — a star that has been ejected from a double star system after its companion exploded as a supernova. This idea is supported by two further clues: a pulsar and supernova remnant in its vicinity.

The team suggests that the star could have started life as one component of a binary star system. If the two stars were close, gas from the companion could have streamed over and in the process the star would have spun faster and faster. This would explain one unusual fact — why it is rotating so fast. After a short life of about ten million years, the massive companion would have exploded as a supernova — which could explain the supernova remnant found nearby. The explosion would have led to the ejection of the star and could explain the third anomaly — the difference between its speed and that of other stars in the region. As it collapsed, the massive companion would then have turned into the pulsar that is observed today and completed the solution to the puzzle.

Although the astronomers cannot yet be sure that this is exactly what happened, Dufton concluded:

This is a compelling story because it explains each of the unusual features that we’ve seen. This star is certainly showing us unexpected sides of the short but dramatic lives of the heaviest stars.

To test this theory, Lennon and de Mink will use NASA’s Hubble Space Telescope to make precise measurements of the star’s proper motion across space.

Bottom line: An international team of astronomers have found the fastest spinning star ever discovered. The star, called VFTS 102, rotates at a dizzying 1 million miles per hour, or 100 times faster than our sun. It lies in a neighboring dwarf galaxy, about 160,000 light-years from Earth. Astronomers think the star might have been ejected from a double star system by its exploding companion. The star was discovered using the European Southern Observatory’s Very Large Telescope at the Paranal Observatory in Chile.