Breakthrough Listen – an initiative to find signs of intelligent life in the universe – used the Green Bank Telescope to observe the bursts from the mysterious distant object known as FRB 121102. 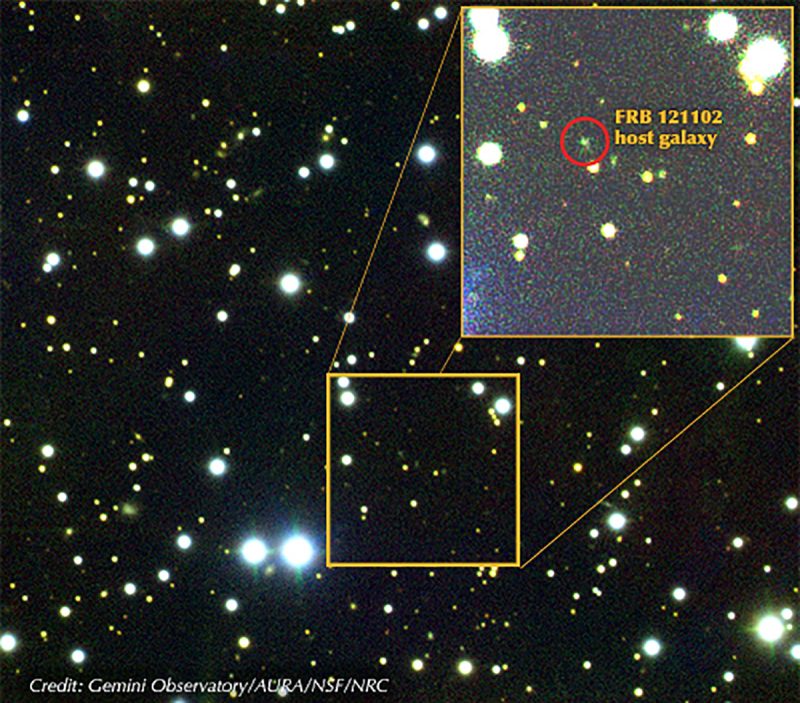 View larger. | Visible-light image of the host galaxy of the source of the fast radio bursts, called FRB 121102. Image via NRAO/ Gemini Observatory/AURA/NSF/NRC.

Breakthrough Listen – a global astronomical initiative to find signs of intelligent life in the universe, launched in 2015 by Internet investor Yuri Milner and cosmologist Stephen Hawking – has detected 15 more brief but powerful radio pulses from FRB 121102, a mysterious source associated with a galaxy in the distant universe. Fast radio bursts are unpredictable bright pulses of radio emission, of extremely short duration (on the order of milliseconds), from largely unknown sources. FRB 121102 is the only one known to repeat. The new Breakthrough Listen observations, made with the Green Bank Telescope in West Virginia, bring the total of known high-energy bursts from this strange object to more than 150.

The new results are published as an Astronomer’s Telegram, which is a non-peer-reviewed vehicle used by astronomers to report upon new astronomical observations of transient sources such as this one.

The first known radio burst from FRB 121102 came on November 2, 2012 (hence the object’s name). Two more bursts occurred on May 17, 2015, and eight more on June 2, 2015. Astronomers had observed fast radio bursts (FRBs) in the past, but, because it repeats, this one quickly became the target of ongoing monitoring campaigns by instruments across the globe.

What causes the fast radio bursts, and why do they repeat? Astronomers don’t know but are trying to find out, aided by the information about FRB 121102 that’s only now accumulating. In 2016, astronomers pinpointed the location of the bursts on our sky’s dome, associating them with a dwarf galaxy about 3 billion light-years from Earth. One suggestion was that the bursts might come a strongly magnetized neutron star, or pulsar, such as the one at the center of the Crab Nebula. But, unlike the Crab Nebula, no X-rays have been detected from FRB 121102, indicating that the bursts’ source is not just a scaled-up version of the young pulsar at the Crab Nebula’s heart. 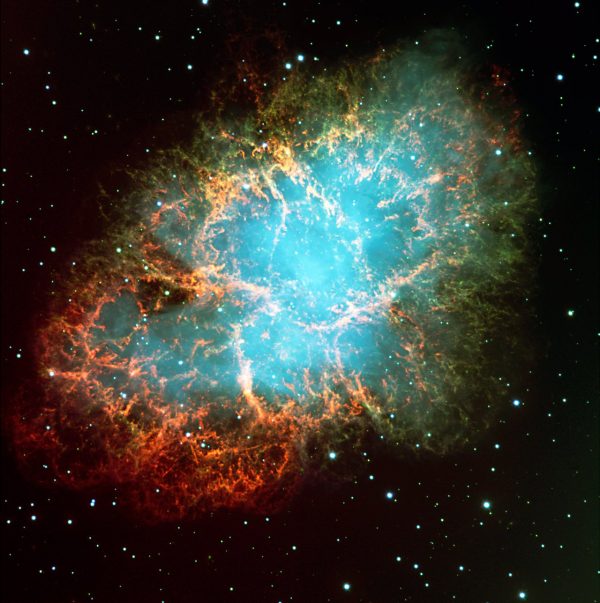 A 3-color composite of the well-known Crab Nebula (also known as Messier 1). It’s the remnant of a supernova explosion about 6,000 light-years away, observed in the year 1054. At its center is a pulsar — a small, compact neutron star that spins around its axis 30 times per second – that might be similar to the source FRB 121102. However, while the Crab pulsar emits X-rays, FRB 121102 does not. Image via ESO.

A much more speculative idea is that the bursts are directed energy sources used by extraterrestrial civilizations to power spacecraft. Hence Breakthrough Listen’s interst in this object. Their August 29, 2017 statement about the 15 new bursts said:

In the early hours of Saturday, August 26, UC Berkeley postdoctoral researcher Vishal Gajjar observed the location of FRB 121102 using the Breakthrough Listen backend instrument at the Green Bank Telescope in West Virginia. The instrument accumulated 400 TB of data on the object over a five-hour observation, observing the entire 4 to 8 GHz frequency band. This large dataset was searched for signatures of short pulses from the source over a broad range of frequencies, with a characteristic dispersion, or delay as a function of frequency, caused by the presence of gas in space between us and the source. The distinctive shape that the dispersion imposes on the initial pulse is an indicator of the amount of material between us and the source, and hence an indicator of the distance to the host galaxy.

Analysis by Dr. Gajjar and the Listen team revealed 15 new pulses from FRB 121102.

Research published in March 2017 by astronomers at the Harvard-Smithsonian Center for Astrophysics (CfA) suggests that fast radio bursts could be evidence of advanced alien technology. Specifically, these bursts might be leakage from planet-sized transmitters powering interstellar probes in distant galaxies. Theorist Avi Loeb, who co-authored that research, said: “An artificial origin is worth contemplating and checking.” This artist’s concept is via CfA.

As well as confirming that the source is in a newly active state, the new observations at Green Bank – using the Breakthrough Listen instrument on the telescope – will allow very precise measurements of the properties of the mysterious bursts from FRB 121102. Breakthrough Listen said:

The observations also show for the first time that FRBs emit at higher frequencies (with the brightest emission occurring at around 7 GHz) than previously observed. The extraordinary capabilities of the Listen backend, which is able to record several gigahertz of bandwidth at a time, split into billions of individual channels, enable a new view of the frequency spectrum of FRBs, and should shed additional light on the processes giving rise to FRB emission.

Breakthrough Listen pointed out that – when the recently-detected pulses left their host galaxy – our own solar system was just 2 billion years old. Life on Earth consisted of only single-celled organisms, and it would be another billion years before even the simplest multi-cellular life began to evolve.

A sequence of 14 of the 15 fast radio bursts from FRB 121102. The streaks across the colored energy plot are the bursts appearing at different times and different energies because of dispersion caused by 3 billion years of travel through intergalactic space. The bursts were captured in a broad bandwidth via the Breakthrough Listen backend instrument at the Green Bank Telescope. Image via Berkeley News.

Bottom line: Breakthrough Listen – an initiative to find signs of intelligent life in the universe – reports 15 new fast radio bursts from the mysterious distant galaxy FRB 121102. The observations were made using the new Breakthrough Listen backend instrument at the Green Bank Telescope in West Virginia.