Factors besides quiet sun must have caused Little Ice Age

Factors other than low solar irradiance – resulting from low sunspot activity – must have contributed to the Little Ice Age that began in the 17th century, according to a new study.

New research suggests that low sunspot activity might not have been the only – or even the major – contributor to the Little Ice Age, as some had previously thought. The Little Ice Age was a noticeably cold era, which began in the late 17th century. It has been thought for several decades to have coincided with a period of unusually low sunspot activity known as the Maunder Minimum. However, the amount of light radiated by the sun – called total solar irradiance, or TSI by scientists – might not have been as low as previously believed during the so-called Maunder Minimum. Researchers analyzed direct measurements of solar magnetic activity during the recent 2008 to 2009 period of low sunspot activity, which they argue was similar to the activity level during the Maunder Minimum.

During a solar minimum, most recently in 2008-2009, there are few to no spots visible on the sun. Credit: NASA SOHO

The new study by C. J. Schrijver and colleagues was published April 13, 2011 in the Geophysical Research Letters (GRL)

Total solar irradiance, or TSI, varies with the 11-year sunspot cycle and influences Earth’s climate, especially when TSI is notably higher or lower than usual. Schrijver analyzed solar magnetic activity during the recent 2008 to 2009 period of low sunspot activity – which he said was similar to the activity level during the Maunder Minimum – and explained that even when there are no sunspots, the sun has a baseline level of magnetic activity.

Therefore, factors other than low solar irradiance – resulting from low sunspot activity – must have contributed to the Little Ice Age. 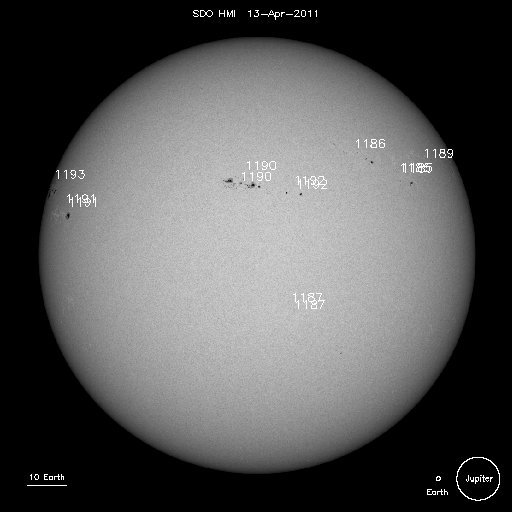 After an unusually long solar minimum, the sun is now becoming more active again. These are spots on the sun on April 13, 2011. Image Credit: NASA SOHO