Scientists just announced 2 new exciting updates about exoplanets. One is a potentially habitable world similar in size and temperature to Earth. The other is a possible new planet – possibly with rings – orbiting the closest star to our sun, Proxima Centauri. 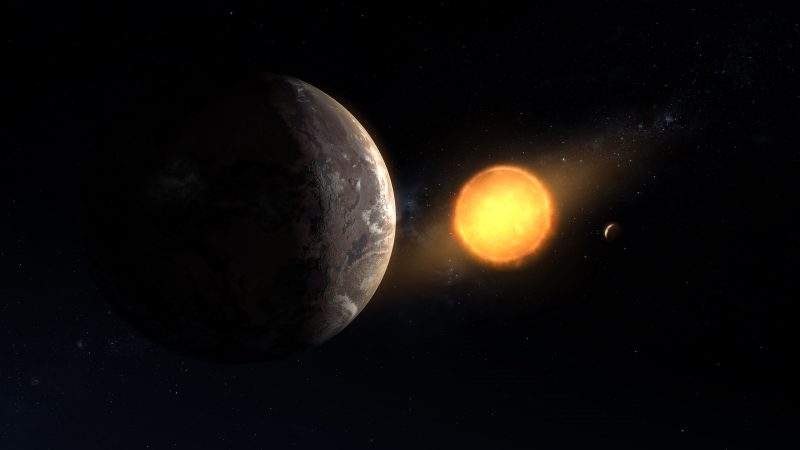 Artist’s concept of Kepler-1649c. This world appears to be the closest analog to Earth yet found in terms of both size and temperature. Image via NASA/ Ames Research Center/ Daniel Rutter.

Last week was very interesting for anyone who loves the idea of exoplanets, or planets orbiting other stars. Not only did NASA and the SETI Institute announce the discovery of a new potentially habitable Earth-sized world – one of the most promising yet – but there was also another possible larger planet directly imaged orbiting the closest star to our sun, Proxima Centauri. And that second planet, if real, might have a huge ring system, according to some analyses done so far.

The possibly habitable world was announced by NASA and SETI Institute scientists on April 15, 2020, with a newly published and peer-reviewed paper in The Astrophysical Journal Letters. The larger possible planet orbiting Proxima Centauri is the subject of a new peer-reviewed paper that was submitted to arXiv on April 14 and has been accepted for publication in Astronomy and Astrophysics.

Let’s look at these worlds, one by one.

A new potentially habitable Earth-sized world. The first planet is called Kepler-1649c. It’s 300 light-years from Earth. Astronomers found it in old data from the Kepler space telescope mission. It had been missed when the data was analyzed the first time around by a computer algorithm called Robovetter, but spotted later on when double-checked by scientists in the Kepler False Positive Working Group (FPWG). As it turned out, this this false positive really was a planet after all. 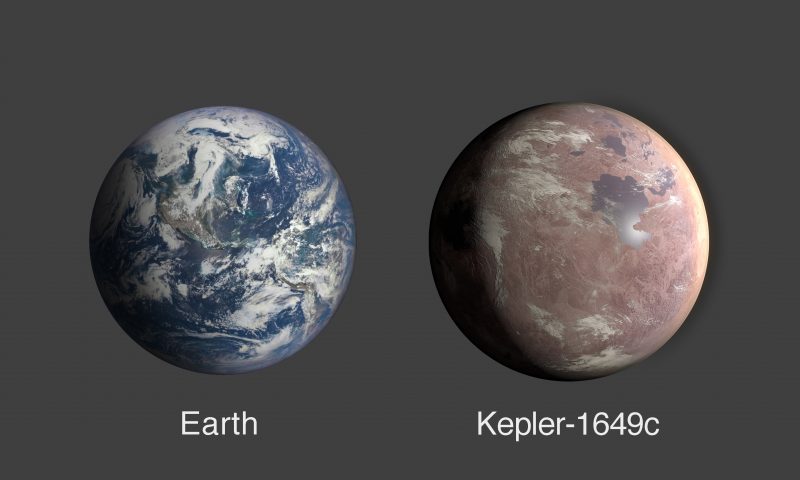 Andrew Vanderburg, a researcher at the University of Texas at Austin (UTA) and first author of the new paper, said in a statement:

Out of all the mislabeled planets we’ve recovered, this one’s particularly exciting, not just because it’s in the habitable zone and Earth-size, but because of how it might interact with this neighboring planet. If we hadn’t looked over the algorithm’s work by hand, we would have missed it.

Kepler-1649c is almost the same size as Earth, only 1.06 times larger. Orbiting in its star’s habitable zone, where liquid water could exist, it receives about 75% the amount of light that Earth does from the sun, and so its temperature is estimated to be similar to Earth’s as well. Thomas Zurbuchen, associate administrator of NASA’s Science Mission Directorate in Washington, said:

This intriguing, distant world gives us even greater hope that a second Earth lies among the stars, waiting to be found. The data gathered by missions like Kepler and our Transiting Exoplanet Survey Satellite (TESS) will continue to yield amazing discoveries as the science community refines its abilities to look for promising planets year after year.

In terms of size and likely temperature, this is the most similar planet to Earth that has ever been found with Kepler. It’s incredible to me that we just found it now, seven years after data collection stopped on the original Kepler field. I can’t wait to see what else might be found in the rich dataset from Kepler over the next seven years, or even seventy.

These findings make Kepler-1649c one of the most promising exoplanets yet found in terms of potential habitability. One caveat to this, though, is that it orbits a red dwarf star. Red dwarfs are well known for emitting large, dangerous flares that might make it difficult for life to exist on any planet. But there’s a lot we don’t know yet about this world (and about red dwarf flares). We don’t know, for example, whether Kepler-1649c has a substantial atmosphere; if so, the atmosphere might help protect any life forms that exist on its surface. 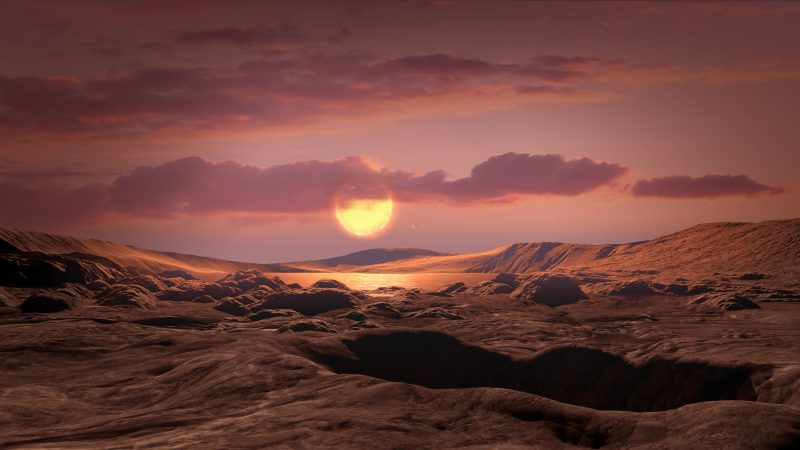 Artist’s concept of what Kepler-1649c could like like on the surface. Image via NASA/ Ames Research Center/ Daniel Rutter.

By comparison, TRAPPIST-1f may be even closer to Earth in terms of size. Also, it is possible that Teegarden c, TRAPPIST-1d and TOI 700 d may be closer in terms of temperature. But Kepler-1649c is intriguing, since it is now considered to be the most similar to Earth of any exoplanet found so far, in terms of both size and temperature, which orbits in the habitable zone of its star.

Could there be any additional planets in this system? Scientists don’t know yet, and so far haven’t found a third one. But the two known planets orbit in a stable ratio. Every four times the outer planet orbits the star, the inner planet orbits almost exactly nine times. This nine-four ratio is rather unique, and might hint at a third, still-undiscovered planet between the two known ones. If so, both the inner and outer planets could orbit in synchronicity with the middle planet, creating a pair of three-to-two resonances.

Finding planets like Kepler-1649c is exciting, since red dwarfs are the most common stars in our galaxy. Many planets have now been discovered orbiting these stars, with many more expected in the near future. Even though red darfs are volatile, this increases the chances of finding worlds around them that are actually habitable. According to Vanderburg:

The more data we get, the more signs we see pointing to the notion that potentially habitable and Earth-sized exoplanets are common around these kinds of stars. With red dwarf stars almost everywhere around our galaxy, and these small, potentially habitable and rocky planets around them too, the chance one of them isn’t too different than our Earth looks a bit brighter.

Now what about the second planet, the one orbiting Proxima Centauri? Keep reading … 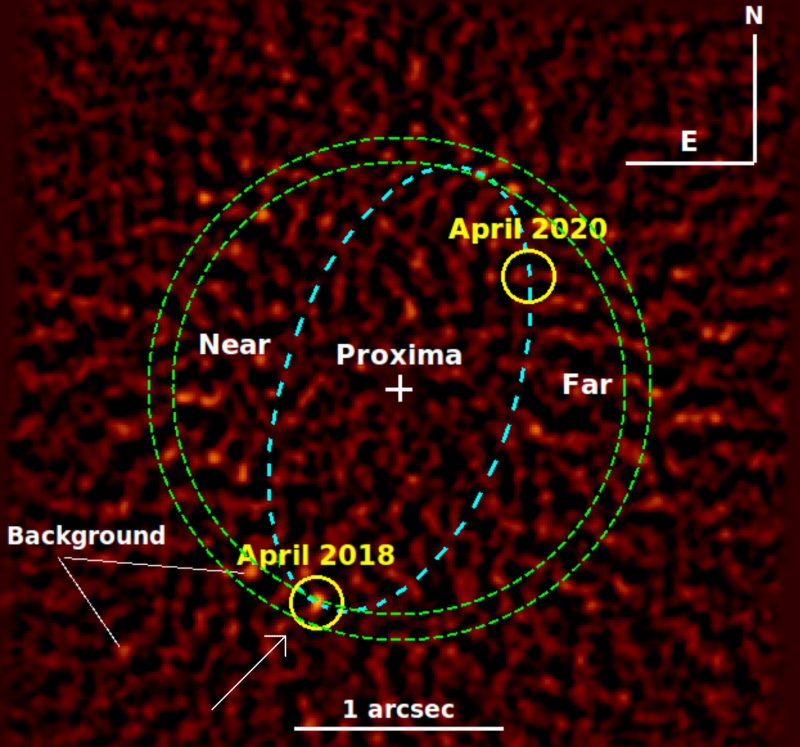 Combination of five images showing the possible second planet orbiting Proxima Centauri, from the SPHERE instrument on the Very Large Telescope (VLT). It shows a bright dot at the predicted location of the planet in April 2018 and the position where it would be now. Image via Gratton et al./ Bad Astronomy.

A second possible planet, possibly with a huge ring system, orbiting Proxima Centauri. In another interesting development, scientists may have directly imaged a new planet orbiting the closest star to our sun, Proxima Centauri. Those results, from the SPHERE instrument on the Very Large Telescope (VLT), have just been published in the paper so far, without an official announcement, but it has stirred up conversations on Twitter. Astronomer Phil Plait wrote an excellent update about it for SYFY Wire on April 16.

The possibility of a second planet at Proxima Centauri – called Proxima Centauri c – had been announced previously last January, but now another another research team thinks they may have successfully imaged it! It hasn’t been confirmed yet, and more work needs to be done, but it is certainly intriguing. The possible planet appears as a bright dot near the star, in a combination of five images taken over two months, beginning in April 2018. 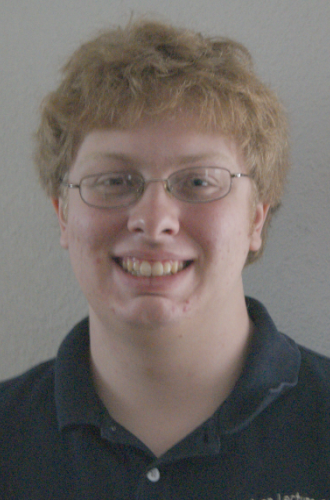 Andrew Vanderburg at the University of Texas at Austin (UTA), first author of the new paper. Image via UTA.

What’s puzzling is that the possible planet appears significantly brighter than it should. If the brightness was entirely from the light reflected off the planet itself, then the planet would be about five times larger than Jupiter. But its estimated mass is more similar to Neptune’s. So it’s possible, the researchers say, that the planet is actually smaller, but has a huge ring system around it. And if it’s a real planet, then it would be the closest one imaged so far. Previous studies suggest that Proxima Centauri c is a super-Earth; larger and more massive than Earth, but smaller and less massive than Neptune.

Both of these are exciting discoveries, even if one is a bit more tentative, and show how there are still many new fascinating worlds waiting to be discovered.

Bottom line: Last week was great for exoplanets, with a new potentially habitable Earth-sized world, and a possible new planet – that may have rings – orbiting the closest star to our sun, Proxima Centauri.