Distant water exoplanets might have oceans thousands of miles deep. That’s in contrast to Earth’s ocean, which is about 6.8 miles (about 11 km) deep at its deepest point. 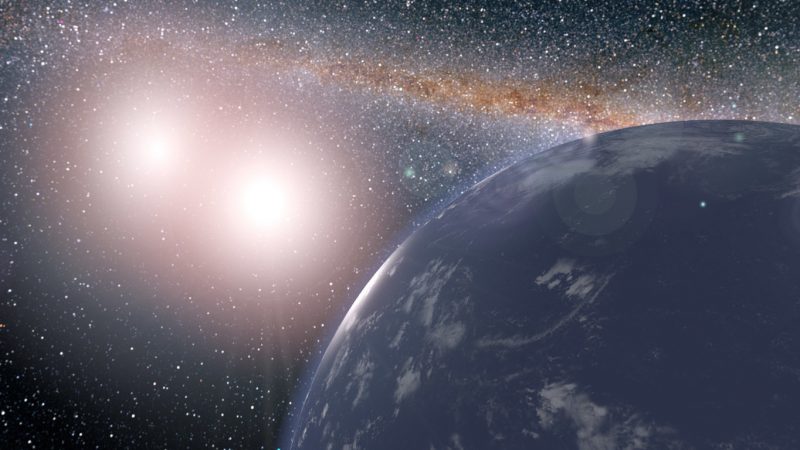 Artist’s concept of a water world exoplanet as described in a new study. If they do exist, these distant water worlds might have global oceans much, much deeper than any in our solar system. Image via NASA/JPL-Caltech.

Water worlds – planets or moons with global oceans – used to be considered part of science fiction, but we are starting to learn now that, not only do they exist, they might actually be fairly common. In our own solar system, the moons Europa, Enceladus, Titan and Ganymede are known or suspected to have such oceans beneath their outer ice crust. Even Pluto is now thought to have one! Perhaps other worlds in our solar system have water we haven’t found yet. Scientists also think they’re getting closer to finding exoplanets – planets orbiting distant stars – that are water worlds as well, including planets with global or near-global oceans on their surfaces.

Now, a new study suggests that some exoplanet water worlds could have oceans much deeper than any in our solar system. Unfathomably deep, even, as in hundreds or thousands of miles deep. The new research was published in the Proceedings of the National Academy of Sciences (PNAS) on April 29, 2019, by Harvard University astronomer Li Zeng and his colleagues. Zeng explained that, according to the team’s computer simulations, some planets may have incredibly deep oceans:

Earth’s oceans are nowhere near as deep. The average ocean depth on Earth is about about 2.2 miles (3.5 km). The maximum depth is 6.8 miles (about 11 km) at the bottom of the Mariana Trench.

The data the team gathered from their computer simulations suggests that water worlds are probably common in our galaxy, particularly in sub-Neptune-sized planets – or mini-Neptunes – that have radii two to four times that of Earth but are smaller than Neptune. These planets are most likely to have deep global oceans, rather than thick atmospheres like gas dwarfs, ice giants or gas giants. Moons like Europa and Enceladus have deep subsurface oceans, for their size, but those are still not nearly as deep as the oceans that would exist on sub-Neptune worlds. 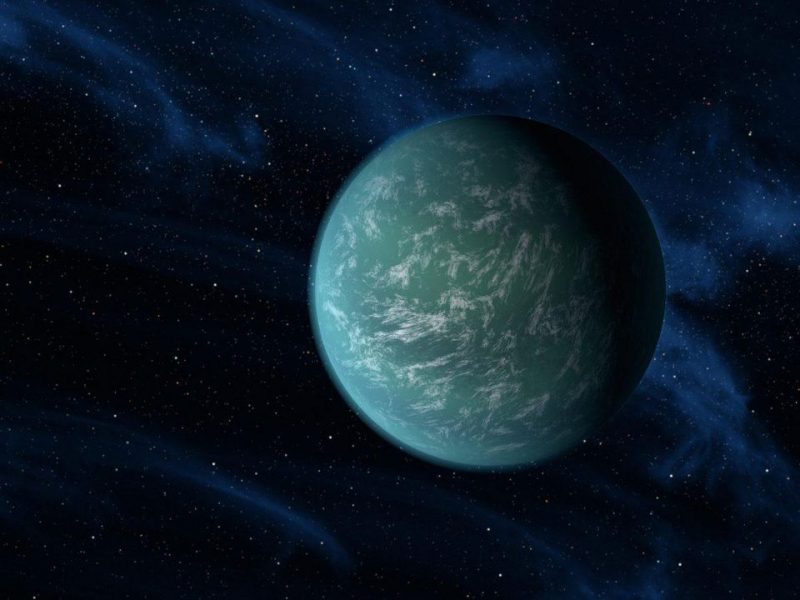 Other kinds of water worlds may be rocky exoplanets with global surface oceans, more similar to Earth. This artist’s concept is of Kepler-22b, a super-Earth and the first exoplanet that NASA’s Kepler mission confirmed to orbit in a star’s habitable zone. Image via NASA/Ames/JPL-Caltech.

These sub-Neptune worlds are one of two primary kinds of exoplanets found so far. The others are super-Earths, between one and four times the size of Earth, which are dense and rocky. There aren’t any super-Earths in our solar system, with the possible exception of Planet Nine (if it is ever found). The sub-Neptunes have much lower densities, and astronomers haven’t been sure if they are gas dwarfs, like Jupiter or Saturn but smaller, with a rocky core and a thick hydrogen atmosphere. Or did their low density mean they contained a lot of water?

Normally, they would be assumed to be gas dwarfs, since water worlds would need to be beyond the “snowline” in a planetary system, where temperatures are cold enough for water or ice, and many sub-Neptunes are very close to their stars. But the new computer simulations suggest that is not always the case, that many sub-Neptunes have much smaller atmospheres as related to their size, more like smaller terrestrial planets like Earth or Venus. Their atmospheres would be nowhere near as thick or deep as other gas dwarf-type sub-Neptunes.

As outlined in the new paper:

The discovery of numerous exoplanet systems containing diverse populations of planets orbiting very close to their host stars challenges the planet formation theories based on the solar system. Here, we focus on the planets with radii of 2-4 Earths, whose compositions are debated. They are thought to be either gas dwarfs consisting of rocky cores embedded in hydrogen-rich gas envelopes or water worlds containing significant amounts of water-dominated fluid/ice in addition to rock and gas. We argue that these planets are water worlds. 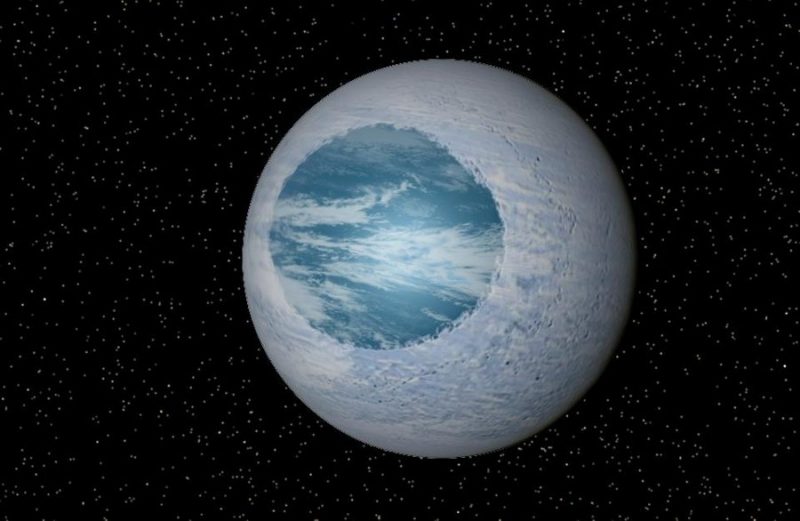 Yet another kind of hypothesized water world – an “eyeball” planet – where there is an ocean only on the star-facing side. The rest of the surface is ice. Image via eburacum45/DeviantArt.

But if there are water world sub-Neptunes close to their stars, how did they form? The findings suggest that they first formed farther out from their stars, and then gradually drifted in closer over time. As Zeng said in Gizmodo:

A water world close to its star must have formed much farther away and then moved closer as its orbit shrank. The planet’s composition was set when it was farther away on a colder orbit. The process of orbital shrinking is called ‘migration’ and it is driven by the gravity of the disk of gas from which the planets formed. If water worlds are common that provides a really strong confirmation that migration really does happen and is a key process in how planets form, both around other stars and in our own solar system.

The research indicates that many sub-Neptunes are quite wet, but just how wet are they? The results show that at least 25 percent of their mass would water or ice, and perhaps up to 50 percent. That’s a staggering amount. We think of Earth as being a water world, but its mass is actually only 0.025 percent water, by comparison. Some water worlds may have so much water that they are completely water-logged, fluid all the way down into the deepest parts of the planet. 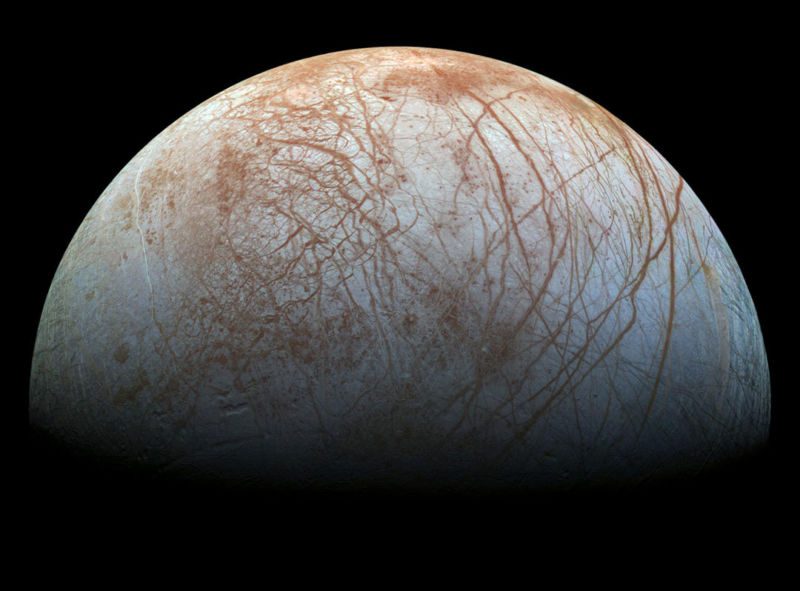 Jupiter’s moon Europa is a water world, with a deep global ocean beneath its outer ice crust. This view is from the Galileo spacecraft in the 1990s. Image via NASA/JPL-Caltech/SETI Institute.

The pressures far down in some of those oceans could also be like nothing on Earth, similar to a million times the atmospheric surface pressure that we experience. In those extreme environments, liquid water would be compressed into uniquely high-pressure phases of ice, such as Ice VII or superionic ice. These ices don’t occur naturally on Earth, but have been created in the laboratory. As Zeng said:

These high-pressure ices are essentially like silicate-rocks within Earth’s deep mantle, they’re hot and hard. These are utterly different worlds compared to our own Earth.

Statistically speaking, these water worlds may be more abundant than Earth-like rocky planets. Perhaps every typical Sun-like star has one or more of these water worlds [and maybe] our solar system is less typical. Generally speaking, this type of planetary system architecture with close-in rocky super-Earths and water-rich sub-Neptunes may be more common in the Milky Way than our type of solar system. 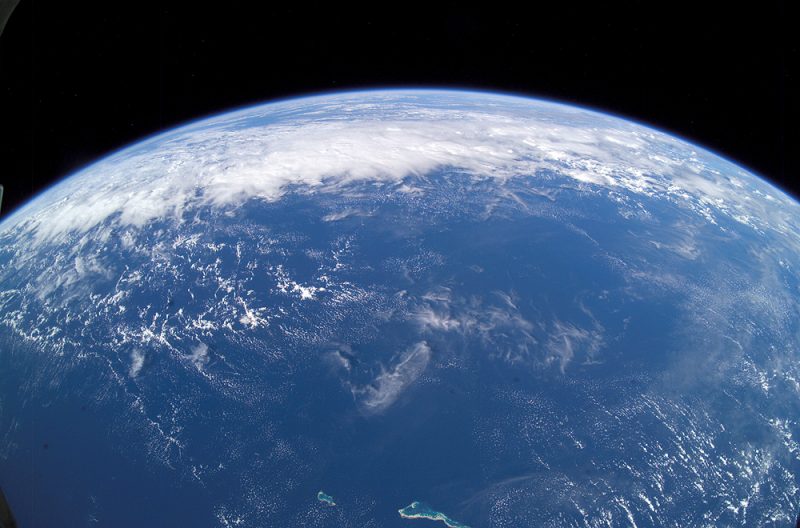 Earth is of course the best-known water world, with oceans that cover about 70% of the surface. That amount of water pales in comparison to what may exist on the water worlds discussed in the new paper, however. Image via NASA.

So with all that water, could these planets be potential homes for life? Yes, there’s a lot of water, but what about the chemical elements and nutrients needed, as found on the on the ocean floors of Earth, and maybe Europa and Enceladus? According to Anders Sandberg, a senior research fellow at Oxford University’s Future of Humanity Institute (FHI), these kinds of water worlds may not be ideal, although they would still be much better than gas dwarfs:

While water worlds are not entirely perfect for life since the heavier elements may be buried under hundreds of kilometers of high-pressure ice, they are likely far better than gas dwarfs.

If the water worlds described in this study do indeed exist, it would open a whole new chapter in exoplanetary exploration. These worlds would be unlike any ever seen before, sort of like taking parts of Earth, ocean moons and gaseous planets and combining them, but on a much larger scale. The water worlds in this study are essentially water worlds on steroids.

Bottom line: If the findings in this new study are accurate, then our galaxy may be full of water worlds. Unlike Earth, these would be larger planets with global oceans that are not only deeper than any in our solar system, but mind-bogglingly deep.