Researchers at the University of Geneva have confirmed the existence of an Earth-sized exoplanet orbiting in the habitable zone of Proxima Centauri, the closest star to our sun.

View larger. | Artist’s concept of what Proxima Centauri b could look like on the surface. Image via ESO/ M. Kornmesser/ UNIGE.

Four years ago, scientists made one of the most exciting exoplanet discoveries so far, a rocky planet similar in size to Earth orbiting the nearest star to the sun, Proxima Centauri. While the detection seemed solid, more confirmation is always good, and now the ESPRESSO  spectrograph on the Very Large Telescope (VLT) in Chile has provided that extra and more detailed confirmation. The news was announced by the University of Geneva (UNIGE) on May 28, 2020.

The new planet is called Proxima Centauri b.

A new paper about it was submitted to the journal Astronomy & Astrophysics on May 25, 2020.

In the past several years, astronomers have found a large and growing number of Earth-sized exoplanets orbiting distant stars. Some are in the habitable zones of their stars, where temperatures might allow liquid water to exist on their surfaces. That is exciting in itself, but Proxima Centauri b is of particular interest since it’s orbiting the closest star to our sun, only 4.2 light-years away.

Its confirmation underscores current findings that such worlds are common in our galaxy. 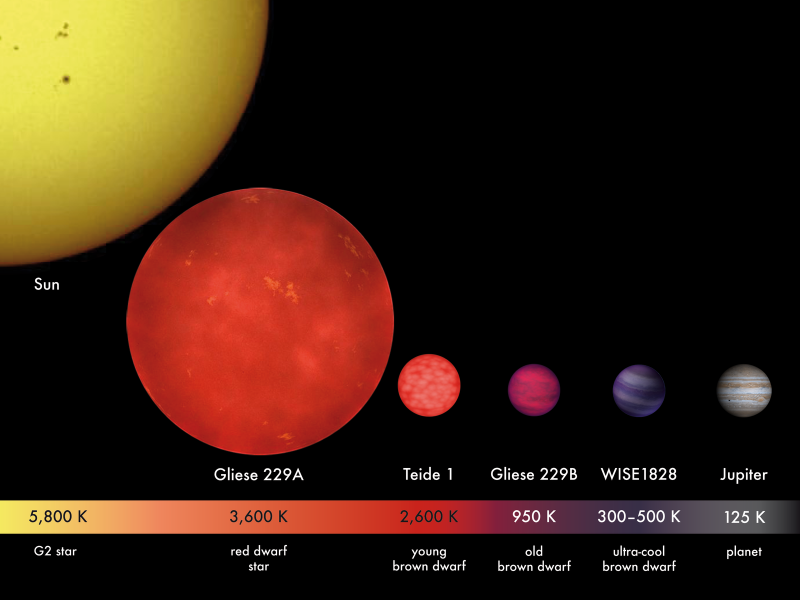 Relative star sizes and photospheric temperatures. Any planet around a red dwarf, such as the one shown here (Gliese 229A), would have to huddle close – as Proxima Centauri b does – to achieve Earth-like temperatures. Image via MPIA/ V. Joergens/ Wikimedia Commons.

So, theoretically, Proxima Centauri b could have water on its surface. It could be habitable, but, of course, we don’t yet know all the details about habitability for exoworlds. We do know that many factors affect a planet’s habitability, such as temperature, composition of the planet and atmosphere, water (or lack of) and radiation from its sun. Red dwarfs like Proxima Centauri are known to emit flares, and these flares make habitability for red dwarf exoplanets even more complex and interesting.

Astronomers first found Proxima Centauri b in 2016, using an older spectrograph called HARPS. The newer spectrograph, ESPRESSO – said to be “the most accurate in the world” – was able to conduct radial velocity measurements on Proxima Centauri that are the most precise to date. A total of 63 spectroscopic observations of Proxima Centauri were acquired by ESPRESSO in 2019. Francesco Pepe at UNIGE, the scientist in charge of ESPRESSO, said in a statement:

We were already very happy with the performance of HARPS, which has been responsible for discovering hundreds of exoplanets over the last 17 years. We’re really pleased that ESPRESSO can produce even better measurements, and it’s gratifying and just reward for the teamwork lasting nearly 10 years. 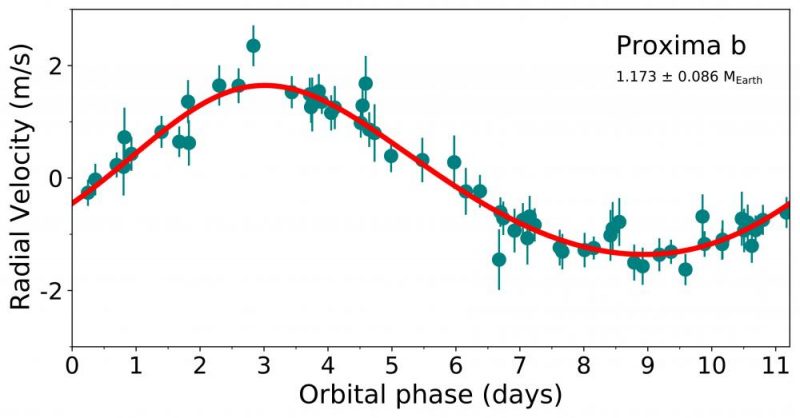 Depiction of the orbital phase of Proxima Centauri b in days. Image via UNIGE.

Confirming the existence of Proxima b was an important task, and it’s one of the most interesting planets known in the solar neighborhood.

The mass of Proxima b was previously estimated to be 1.3 Earth masses. The accuracy of the new measurement of 1.17 Earth masses is unprecedented, according to Michel Mayor, the “architect” of all ESPRESSO-type instruments:

ESPRESSO has made it possible to measure the mass of the planet with a precision of over one-tenth of the mass of Earth. It’s completely unheard of.

The new confirmation of Proxima Centauri b is exciting, but there may be more surprises in store … there is also possible evidence of another and smaller planet in the newest data. A secondary detection was also made, although it isn’t certain whether it is actually a planet. If it is, it is even smaller than Proxima Centauri b. 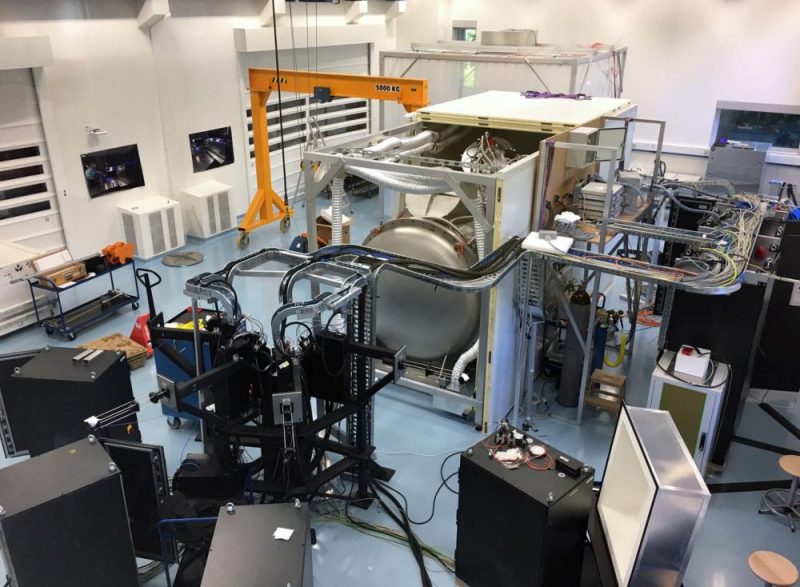 The ESPRESSO spectrograph on the Very Large Telescope (VLT) in Chile. Image via UNIGE.

If the signal was planetary in origin, this potential other planet accompanying Proxima Centauri b would have a mass less than one third of the mass of the Earth. It would then be the smallest planet ever measured using the radial velocity method.

If it is a planet, it would be more akin to Mars or Mercury in size and mass – estimated at a minimum Earth mass of 0.29 ± 0.08 – and orbits the star in only 5.15 days. It wouldn’t be too surprising, though, in that low-mass stars like red dwarfs tend to have multiple planets in their systems. More observations will be required to either confirm or refute this possible second planet.

But wait, there’s more! Last January, another research team announced their finding of another possible planet orbiting Proxima Centauri, called Proxima Centauri c. This one is also still just a candidate at this point, but if real, is about six time as massive as Earth. This would make it a super-Earth, planets that are significantly larger and more massive than Earth but smaller and less massive than Neptune. It is estimated to orbit the star every 5.2 years. If both of the new candidates were to be confirmed, that would mean Proxima Centauri would have at least three planets orbiting it!

Proxima Centauri is the nearest star to our sun, although it is actually part of a three-star system including the two stars of Alpha Centauri. They may be the closest stars, but the planets don’t transit in front of Proxima Centauri as seen from Earth, as most exoplanets are found, so astronomers have had to use the radial velocity method to find them, where the planets’ gravity causes a slight wobble in the star’s motion.

While little is known so far about what Proxima Centauri b is actually like, just the fact that it exists around the nearest star to our solar system supports previous research showing that Earth-sized and super-Earth-sized exoplanets are common in our galaxy. That is exciting, and bodes well for the search for life elsewhere.

One potential problem though is that red dwarf stars are very energetic and emit dangerous radiation that could strip the atmospheres off of planets that are too close. Whether this is the case for Proxima Centauri b is not known yet. If it does still have a substantial atmosphere, it would be an ideal target for other telescopes to look for possible biomarkers, chemical signatures of life. According to Christophe Lovis at UNIGE:

Is there an atmosphere that protects the planet from these deadly rays? And if this atmosphere exists, does it contain the chemical elements that promote the development of life (oxygen, for example)? How long have these favorable conditions existed? We’re going to tackle all these questions, especially with the help of future instruments like the RISTRETTO spectrometer, which we’re going to build specially to detect the light emitted by Proxima b, and HIRES, which will be installed on the future ELT 39 m giant telescope that the European Southern Observatory (ESO) is building in Chile.

The confirmation of Proxima Centauri b – now the nearest confirmed exoworld – is exciting. Its potential habitability and close proximity to our own solar system give us something to think about. It’s another big step towards finding an inhabited world beyond Earth. 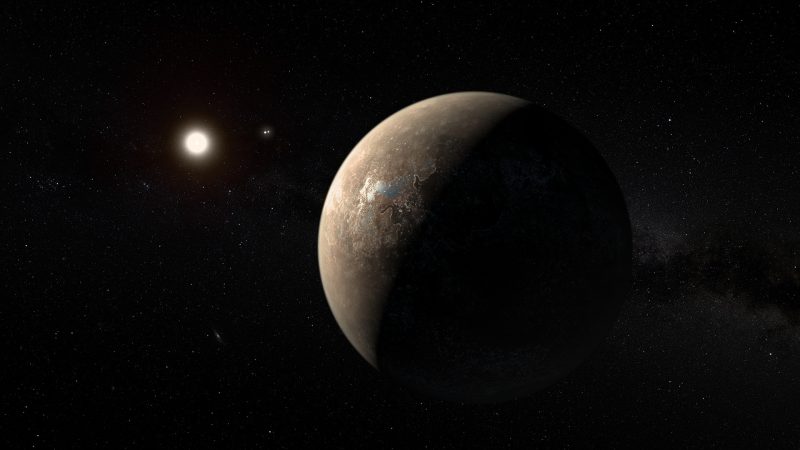 Bottom line: Researchers have confirmed the existence of an Earth-sized exoplanet orbiting the nearest star to our sun, Proxima Centauri.

Via University of Geneva