Astronomers have discovered that a Neptune-sized exoplanet – HAT-P-11b – has an even larger helium atmosphere than first thought. The atmosphere is literally inflated like a massive balloon. 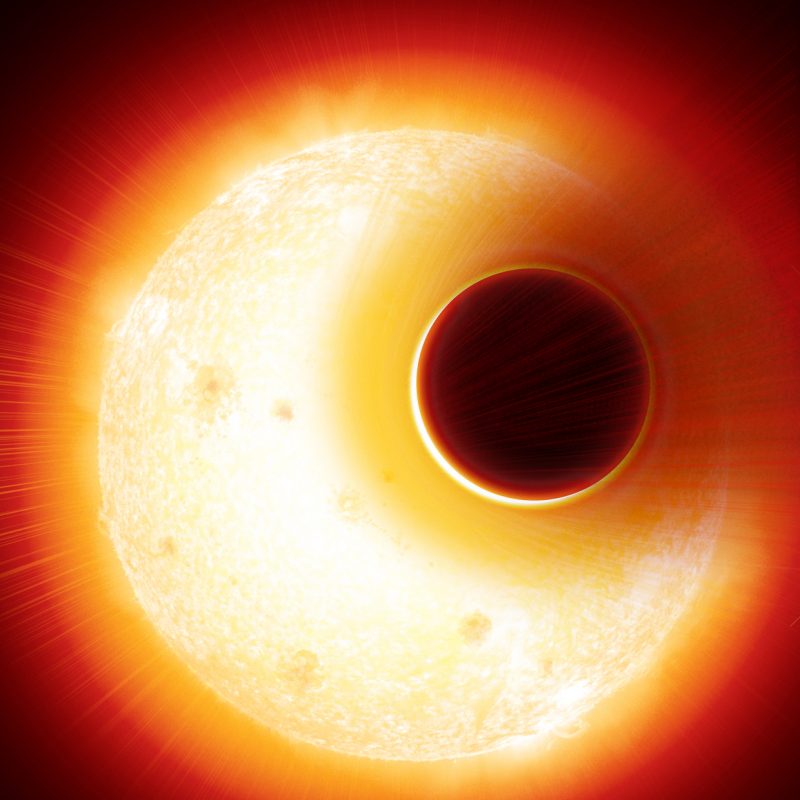 Artist’s concept of the exoplanet HAT-P-11b (in front of its star) with its extended helium atmosphere blown being out into space by stellar radiation from the star. Image via Denis Bajram.

Exoplanets come in many different types and sizes, from small rocky worlds to gas giants much larger than Jupiter. Now, astronomers have discovered another unique world, with a helium-rich atmosphere they say is “swollen like a balloon.” The research team, led by scientists from the University of Geneva in Switzerland (UNIGE), published its peer-reviewed findings in the December 6, 2018, issue of the journal Science.

Helium is quite rare on Earth, but is common throughout the universe. In fact, it is the known universe’s second-most abundant element after hydrogen. The planet – which is labeled HAT-P-11b – has an atmosphere that’s “puffed out” larger than normal, kind of like a child’s toy balloon, something never seen before until now. As stated by Jessica Spake at the University of Exeter, scientists are elated by the finding:

This is a really exciting discovery, particularly as helium was only detected in exoplanet atmospheres for the first time earlier this year. The observations show helium being blasted away from the planet by radiation from its host star. Hopefully we can use this new study to learn what types of planets have large envelopes of hydrogen and helium, and how long they can hold the gases in their atmospheres.

HAT-P-11b is just a little larger than Neptune. Image via Aldaron/Wikipedia/Open Exoplanet Catalogue.

HAT-P-11b, first discovered in 2009, is known as a hot Neptune, 124 light-years away in the constellation Cygnus. HAT-P-11b, about the size of Neptune in our solar system, is literally swollen with helium, as the gas escapes into space from the overheated atmosphere. As the name implies, the atmosphere is very hot, some 1,022 degrees Fahrenheit (550 degrees Celsius)! This perhaps isn’t too surprising since the planet orbits 20 times closer to its star than Earth orbits the sun. As explained by Romain Allart, a Ph.D. student at UNIGE and first author of the new study:

We suspected that this proximity with the star could impact the atmosphere of this exoplanet. The new observations are so precise that the exoplanet atmosphere is undoubtedly inflated by the stellar radiation and escapes to space.

Helium is difficult to detect on exoplanets, but it was first tentatively detected on HAT-P-11b with the Hubble Space Telescope earlier this year, although the results were difficult to interpret. Additional observations were needed, so some of the team members from UNIGE, who are also members of the National Centre of Competence in Research PlanetS (NCCR PlanetS), decided to use another telescope – the 4-meter telescope at the Calar Alto Observatory in Andalusia, Spain – which used a new type of spectrograph called CARMENES. 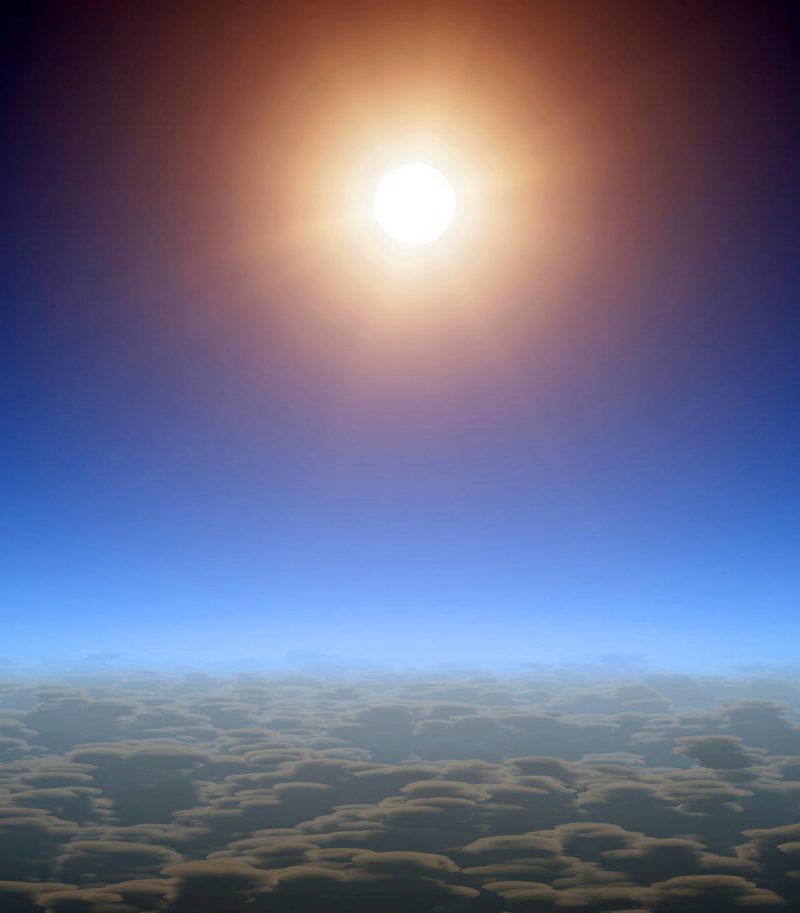 Artist’s concept of what the view would look like high up in HAT-P-11b’s atmosphere. Image via NASA/JPL-Caltech.

The CARMENES instrument is able to identify more than 100,000 colors in the infrared spectrum, in contrast to the hundreds that Hubble can see. This ability to see fine detail helped not only to confirm the existence of helium in the atmosphere of HAT-P-11b, but also to show that the helium is slowly escaping to space as the atmosphere is “inflated” by particle radiation from the star (the star’s solar wind).

The new data is so precise, that scientists are able to track the trajectories of the helium atoms as they escape the atmosphere. As explained by Vincent Bourrier at UNIGE and NCCR PlanetS:

Helium is blown away from the day side of the planet to its night side at over 10,000 km/h. Because it is such a light gas, it escapes easily from the attraction of the planet and forms an extended cloud all around it.

The findings make HAT-P-11b an interesting case study regarding exoplanet atmospheres and how new technology can tell astronomers more about their composition and behavior, even though most of these worlds are many light-years away. This includes planets – like HAT-P-11b – with hot atmospheres. So-called “hot Jupiters” are also common, as the most recent space and ground-based telescope surveys have found. Like HAT-P-11b, they orbit very close to their stars, unlike the gas giants in our own solar system, and so have scorching atmospheres. As noted by Christophe Lovis, also at UNIGE and NCCR PlanetS and co-author of the new study:

These are exciting times for the search of atmospheric signatures in exoplanets. 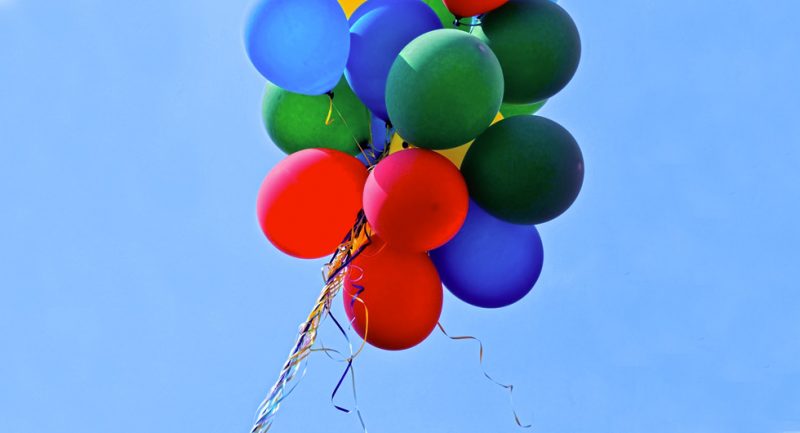 Helium, although rather rare on Earth, is used for various purposes, including filling balloons. The atmosphere of HAT-P-11b also contains helium and is “puffed up” like a giant balloon. Image via chriskeller/pixabay/CC0 Creative Commons.

Indeed they are. A few decades ago it wasn’t even known if exoplanets existed, but now they are being discovered by the thousands. Not only are astronomers finding them, but they are also now beginning to be able to discern more about them – their sizes, masses, compositions, temperatures and atmospheres. Right now that is mostly limited to larger planets like HAT-P-11b, but soon, new telescopes like the James Webb Space Telescope will be able to study the atmospheres of rocky Earth-sized planets – also now being discovered – and find out how many may be habitable for life.

In 2014, it was also reported that water vapor had been detected in the planet’s atmosphere, which is primarily composed of hydrogen, along with the helium.

Bottom line: The inflated helium atmosphere of HAT-P-11b offers astronomers a unique opportunity to study what happens when a giant exoplanet’s atmosphere becomes super-heated by its star and is at least partially blown off into space. This data can also be useful when observing other hot gas giant planets as well, such as hot Jupiters.

Via University of Geneva