Exoplanet has a comet-like tail Gliese 436b

A Neptune-sized exoplanet is being trailed by an immense cloud of hydrogen. This discovery might also suggest a method for detecting extrasolar oceans. 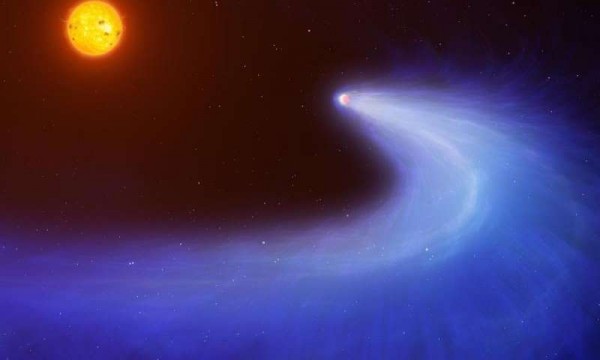 Image via Mark Garlick/University of Warwick

Astronomers are keenly interested in finding exoplanets – distant planets orbiting stars besides our sun – that have oceans. That’s because life as we know it on Earth needs water. Today (June 24, 2015), an international team of scientists announced their discovery of a Neptune-sized exoplanet being trailed by an immense cloud of hydrogen. They say that this comet-like tail from an exoplanet helps explain how hot and rocky super-Earths form and may also suggest a method for detecting extrasolar oceans. What’s more, they say, they can use the discovery to get a picture of the future of Earth’s atmosphere, four billion years from now. Their study is published in the journal Nature.

David Sing of the University of Exeter’s Physics and Astronomy department co-authored the study. He said:

Escaping gas has been seen in the past for larger gas giant exoplanets, so it was a surprise that looking at a much smaller planet resulted in such a big and stunning comet-like display.

The exoplanet is known to astronomers GJ436b, or Gliese 436b. Astronomers discovered it in 2004, and it wasn’t until later they realized that this planet transits, or periodically passes in front of its star as seen from Earth. These transits are what enabled astronomers to figure out that Gliese 436b’s atmosphere is leaving behind a gigantic trail of hydrogen.

David Ehrenreich, an astrophysicist with University of Geneva and lead author of the paper said:

This cloud is very spectacular. It’s as if, after carrying the planet’s atmosphere at a high temperature, causing the hydrogen to evaporate, the radiation of the star was too weak to blow away the cloud that accumulated around the planet. 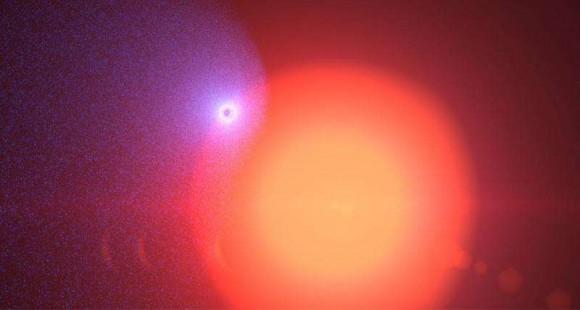 Artist’s concept of the warm, Neptune-size exoplanet GJ 436b at the beginning of its transit across the surface of its parent star. Image via D.Ehrenreich / V. Bourrier (Université de Genève) / A. Gracia Berná (Universität Bern)

The astronomers used the Hubble Space Telescope to detect this hydrogen cloud’s shadow when it passed in front of the star. This observation could not have been made from Earth, because our atmosphere blocks most ultraviolet light. Astronomers needed a space telescope with Hubble’s ultraviolet capability to view the cloud. Ehrenreich explained:

You wouldn’t be able to see it at visible wavelengths. But when you turn the ultraviolet eye of Hubble onto the system, it’s really quite a transformation — the planet turns into a monstrous thing.

Another study co-author, Vincent Bourrier, said this type of observation is very promising in the search of habitable pla­nets since …

… hydrogen from the ocean water that evaporates on slightly hotter terrestrial planets than the Earth could be detected.

The phenomenon might even explain the disappearance of hydrogen from Earth’s atmosphere. After all, hydrogen and helium are the most common elements in the universe. When Earth formed, 4 billion years ago, our world must have had a lot of hydrogen, but now that hydrogen is mostly gone.

Finally, the astronomers say, observations like this one might help us to picture the distant future of our planet, when, in 3 or 4 billion years, our sun swells to become a red giant. Astrophysicists now hypothesize that our planet would be transformed into a giant comet, thus resembling a comet, much like GJ436b. 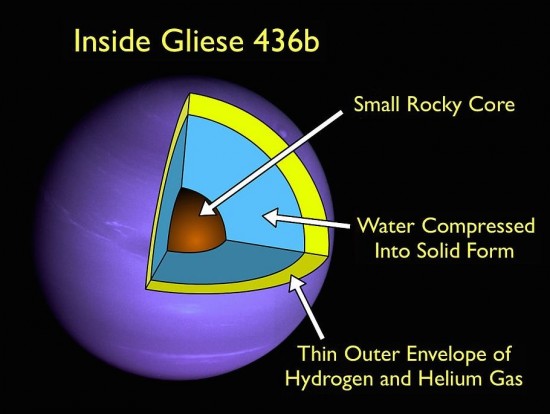 Possible interior structure of Gliese 436b, via Wikipedia

Bottom line: Neptune-sized exoplanet Gliese 436b is being trailed by an immense comet-like cloud of hydrogen.