Newest Mars mission on its way

Signals have been received from the ExoMars mission spacecraft, and the craft is in good health and on its way to Mars!

The ExoMars 2016 mission launched from the Baikonur Cosmodrome in Kazakhstan Monday morning (March 14, 2016), at 09:31 UTC (5:31 EDT). The mission is now beginning its seven-month, 300-million-mile journey to Mars. ExoMars is a joint mission of the European Space Agency (ESA) and Russia’s Roscosmos space agency. The mission has two parts: the Trace Gas Orbiter (TGO) and Schiaparelli, an entry, descent and landing demonstrator. ESA said in a statement:

The first of two joint ESA-Roscosmos missions to Mars has begun a seven-month journey to the Red Planet, where it will address unsolved mysteries of the planet’s atmosphere that could indicate present-day geological – or even biological – activity.

The Trace Gas Orbiter and the Schiaparelli entry, descent and landing demonstrator lifted off on a Proton-M rocket operated by Russia’s Roscosmos at 09:31 GMT (10:31 CET) this morning from Baikonur, Kazakhstan.

The Breeze-M upper stage, with ExoMars attached, then completed a series of four burns before the spacecraft was released at 20:13 GMT (21:13 CET).

Signals from the spacecraft, received at ESA’s control centre in Darmstadt, Germany via the Malindi ground tracking station in Africa at 21:29 GMT (22:29 CET), confirmed that the launch was fully successful and the spacecraft is in good health.

ESA had said prior to launch:

TGO will make a detailed inventory of Mars’ atmospheric gases, with particular interest in rare gases like methane, which implies that there is an active, current source. TGO aims to measure its geographical and seasonal dependence and help to determine whether it stems from a geological or biological source.

Meanwhile, Schiaparelli will demonstrate a range of technologies to enable a controlled landing on Mars in preparation for future missions. After a seven-month cruise, the lander will separate from the TGO on October 16, 2016, and land on Mars on October 19, for several days of activities.

TGO will then enter orbit around the Red Planet ahead of its exciting multiyear science mission. It will also serve as a data relay for the second ExoMars mission, comprising a rover and a surface science platform, planned for launch in 2018. It will also provide data relay for NASA rovers …

The launch of ExoMars 2016 will mark the start of a new era of Mars exploration for Europe.

Great explanation of the history of the ExoMars project. 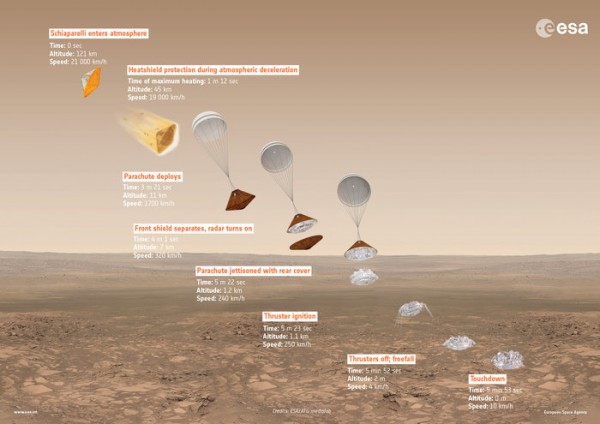 Overview of Schiaparelli’s entry, descent and landing sequence on Mars, with approximate time, altitude and speed of key events indicated. Read more about this image.

The European Space Agency (ESA) established the ExoMars program, to continue the search for life on the Red Planet and to test the latest aerospace technology.

The mission’s lander – Schiaparelli – will eject and land on the planet’s surface. During its decent to the surface, Schiaparelli will communicate back to the orbiter, which will be positioned in an elliptical orbit around Mars. The module is designed to maximize the use of currently developed technology within the ExoMars program, which includes specially produced thermal protection, a parachute system, a radar Doppler altimeter system, and a liquid propulsion braking system.

Schiaparelli is expected to function on the surface of Mars by utilizing the excess energy capacity of its batteries. While its abilities are limited due to the absence of long-term power, the sensors that will be functional will perform powerful surface observations on its landing site, the Martian plain Meridiani Planum, which is close to the planet’s equator. This area of interest contains an ancient layer of hematite, an iron oxide, which is found in aquatic environments on Earth.

The EDM module is expected to last approximately 2 – 8 days upon landing.

Meanwhile the Trace Gas Orbiter (TGO) will be observing the atmospheric gases that are present throughout the Martian atmosphere. A key goal of the mission is to gain better insight into the production and release of methane gas, which are present in small concentrations (less than 1% of the atmosphere). As the TGO orbits the red planet it will be able to detect methane, which has been shown to vary in location and time on the planet’s surface. Since methane is short-lived on geological time scales, its presence implies the existence of some kind of active source.

And since both geological and biological processes produce methane, that source is of high interest to scientists.

The video and image below show part of the pre-launch activities: 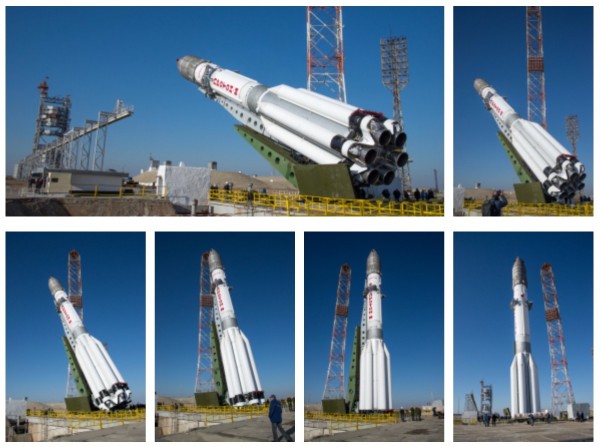 ExoMars 2016 in the Proton-M launcher at the launch pad in Baikonur, Kazakhstan. Image via ESA – B. Bethge.