EVE and Wall-E have Mars in their sights

The MarCOs – 2 briefcase-sized CubeSats accompanying NASA’s InSight spacecraft – are chasing Mars as it orbits the sun. Along the way, they’ve captured the 1st-ever CubeSat image of Mars! 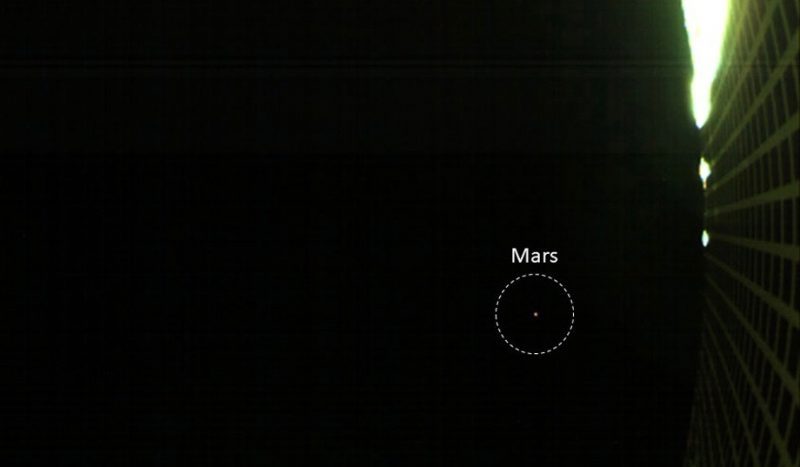 One of NASA’s twin MarCO spacecraft – MarCO-B, aka Wall-E – captured this image on October 2, 2018. It was the 1st time this kind of low-cost, briefcase-sized spacecraft, called a CubeSat, has imaged Mars. See an annotated image below. Image via NASA/JPL-Caltech.

When you’re the only CubeSats ever to have traveled to Mars, it’s easy to rack up a whole series of firsts. This week (October 22, 2018), NASA released the first-ever CubeSat image of the Red Planet its MarCO mission, now en route to Mars, due to arrive in November. Sure, the image isn’t very dramatic, but imaging isn’t the task at hand for MarCO-A and MarCO-B, which were nicknamed EVE and Wall-E by engineers at NASA’s Jet Propulsion Laboratory. Instead, the MarCOs – launched on May 5 along with NASA’s InSight lander – are providing a test of the role CubeSats might play in future space missions.

InSight will touch down on Mars next month. That more elaborate mission is designed to study Mars’ deep interior for the first time.

The MarCO CubeSats are following along behind InSight during its cruise to Mars. If they make it all the way to Mars, they’ll radio back data about InSight while it enters Mars’ atmosphere and descends to the planet’s surface. 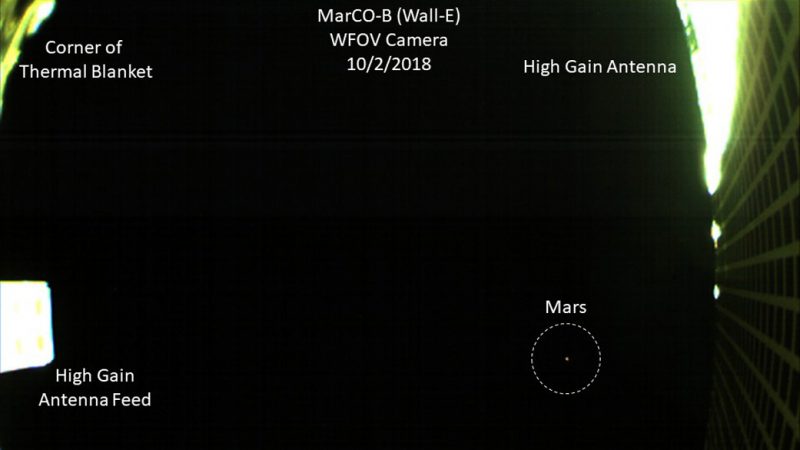 Annotated image of 1st CubeSat image of Mars. You can see a piece of the high-gain antenna, which is key to the MarCOs’ job of tracking NASA’s Mars InSight mission while entering the Martian atmosphere. Image via NASA/JPL-Caltech.

A wide-angle camera on top of MarCO-B produced the image as a test of exposure settings. The MarCO mission, led by NASA’s Jet Propulsion Laboratory in Pasadena, California, hopes to produce more images as the CubeSats approach Mars ahead of November 26. That’s when they’ll demonstrate their communications capabilities while NASA’s InSight spacecraft attempts to land on the red planet. (The InSight mission won’t rely on them, however; NASA’s Mars orbiters will be relaying the spacecraft’s data back to Earth.)

MarCO-B’s wide-angle camera looks straight out from the deck of the CubeSat. Parts related to the spacecraft’s high-gain antenna are visible on either side of the image. Mars appears as a small red dot at the right of the image.

To take the image, the MarCO team had to program the CubeSat to rotate in space so that the deck of its boxy ‘body’ was pointing at Mars. After several test images, they were excited to see that clear, red pinprick.

We’ve been waiting six months to get to Mars. The cruise phase of the mission is always difficult, so you take all the small wins when they come. Finally seeing the planet is definitely a big win for the team. 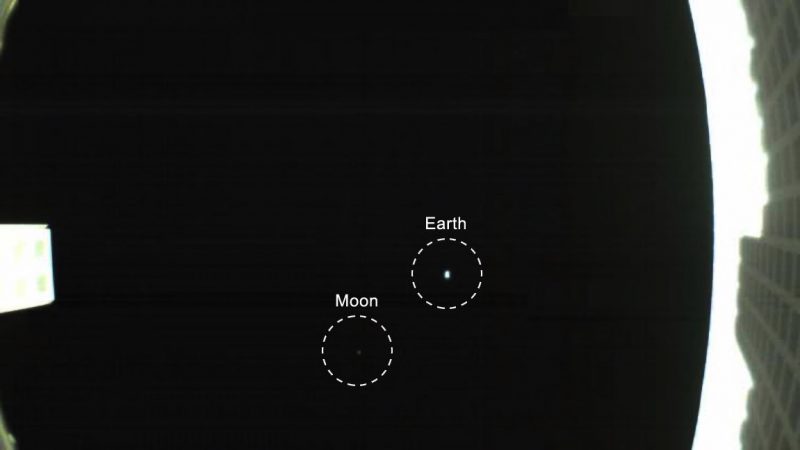 The recent Mars pic isn’t the only “1st” for Wall-E and EVE. Here’s Wall-E’s distant image of the Earth and moon – acquired May 9, 2018 – just a few days after the CubeSat’s launch to Mars. Read more. Image via NASA JPL-Caltech.

Bottom line: NASA’s MarCO mission – consisting of two briefcase-sized CubeSats on their way to Mars – have Mars in their sights!