Astronomers have discovered that the basic building blocks of some planetary systems are very similar to Earth’s elements, helpful information in the search for truly Earth-like planets in other solar systems. 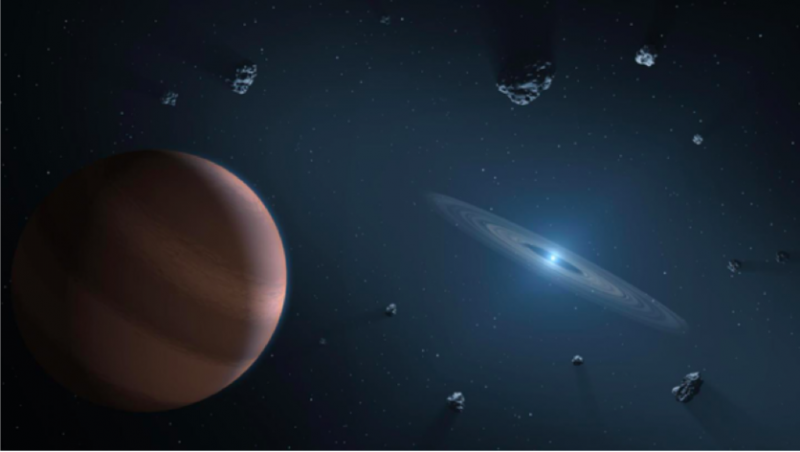 Artist’s concept of a white dwarf star surrounded by a debris disk and planetary bodies. Such systems have been found to contain the same kinds of elements as our own solar system. Image via NASA.

Nearly 4,000 exoplanets have been discovered so far, orbiting distant stars. One question that has inevitably come up is, how similar are those planets and solar systems to ours, in particular to Earth? Are they comparable in composition or completely different? A new study, presented at the Goldschmidt Conference in Boston on August 15, 2018, is helping to shed light on that issue. It turns out that the “ingredients” that the Earth is composed of are rather normal, with the same elements, in the same proportions, as material in planetary systems elsewhere.

The scientists involved measured the compositions of 18 different planetary systems, up to 456 light-years away. They found a lot of similarities between the composition of planets in those systems and that of Earth. That doesn’t mean all those planets are just like Earth, rather that they are made of the same basic stuff as Earth in terms of elements. As Dr. Siyi Xu of the Gemini Observatory in Hawaii explained:

Most of the building blocks we have looked at in other planetary systems have a composition broadly similar to that of the Earth.

Dr. Xu presented the new findings at the Goldschmidt Conference. She added:

It is difficult to examine these remote bodies directly. Because of the huge distances involved, their nearby star tends to drown out any electromagnetic signal, such as light or radio waves. So we needed to look at other methods. 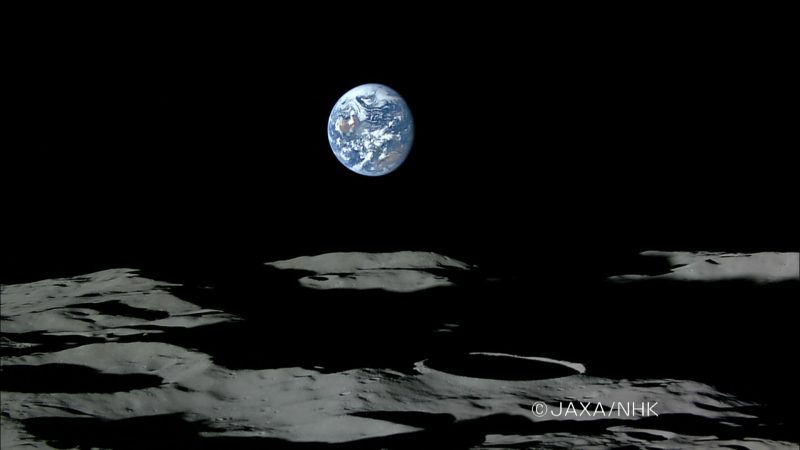 Earth as seen from the Moon by the Japanese Kaguya spacecraft in 2007. The elemental “building blocks” of our planet are common in the galaxy. Image via JAXA/NHK.

Dr. Xu’s team looked at how these planetary building blocks affect light coming from white dwarf stars – small, dense stars which have burnt off the majority of their hydrogen and helium gases, using spectrographs on the Keck telescope in Hawaii, the world’s largest optical and infrared telescope, as well as the Hubble Space Telescope. According to Dr. Xu:

White dwarfs’ atmospheres are composed of either hydrogen or helium, which give out a pretty clear and clean spectroscopic signal. However, as the star cools, it begins to pull in material from the planets, asteroids, comets and so on which had been orbiting it, with some forming a dust disk, a little like the rings of Saturn. As this material approaches the star, it changes how we see the star. This change is measurable because it influences the star’s spectroscopic signal, and allows us to identify the type and even the quantity of material surrounding the white dwarf. These measurements can be extremely sensitive, allowing bodies as small as an asteroid to be detected.

In this study, we have focused on the sample of white dwarfs with dust disks. We have been able to measure calcium, magnesium, and silicon content in most of these stars, and a few more elements in some stars. We may also have found water in one of the systems, but we have not yet quantified it: it’s likely that there will be a lot of water in some of these worlds. For example, we’ve previously identified one star system, 170 light years away in the constellation Boötes, which was rich in carbon, nitrogen and water, giving a composition similar to that of Halley’s Comet. In general though, their composition looks very similar to bulk Earth. 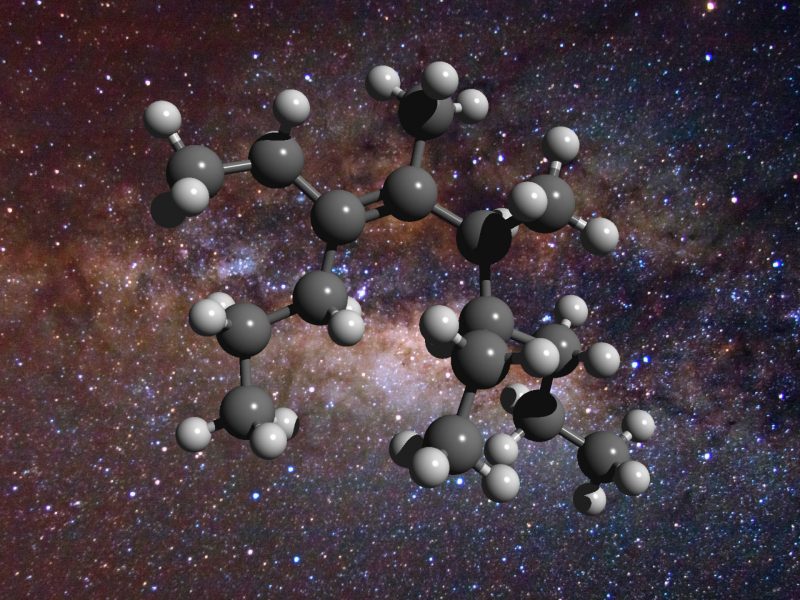 Carbon is one of the most common elements on Earth, and is also a building block of earthly life. This and other elements found on our planet are now known to be present in other solar systems as well. This diagram is of a “greasy” carbon molecule, found to be common in the galaxy. Image via D. Young.

This would mean that the chemical elements, the building blocks of Earth are common in other planetary systems. From what we can see, in terms of the presence and proportion of these elements, we’re normal, pretty normal. And that means that we can probably expect to find Earth-like planets elsewhere in our galaxy.

This work is still ongoing and the recent data release from the Gaia satellite, which so far has characterized 1.7 billion stars, has revolutionized the field. This means we will understand the white dwarfs a lot better. We hope to determine the chemical compositions of extrasolar planetary material to a much higher precision. 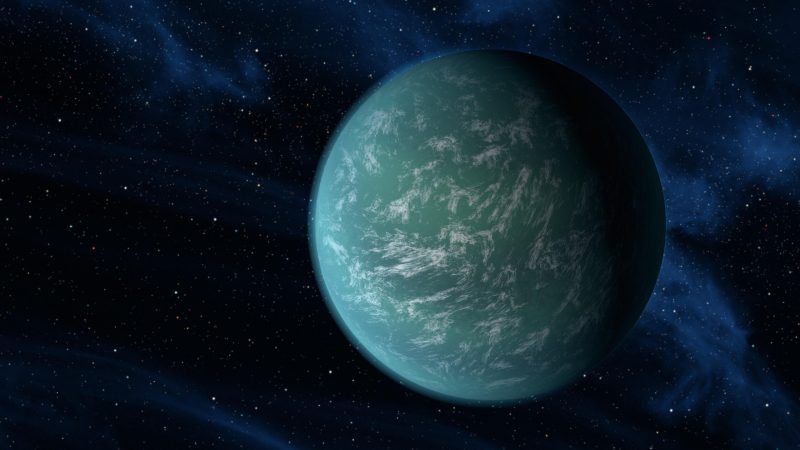 Artist’s concept of Kepler-22b, a super-Earth exoplanet 910 light-years from our Sun. The new findings suggest that worlds actually similar to Earth should be out there waiting to be discovered. Image via NASA/Ames/JPL-Caltech.

Other exoplanets have been found to vary wildly in appearance, from huge “hot Jupiters” to “super-Earths” (larger than Earth but smaller than Uranus or Neptune) and small, rocky worlds Earth or Mars. If the overall bulk compositions of these planets is similar to our solar system, notably Earth, as the evidence suggests, then that is a good indication that worlds truly similar to Earth are probably out there, waiting to be discovered. As Dr. Sara Seager, Professor of Planetary Science at Massachusetts Institute of Technology, and the deputy science director of the recently-launched Transiting Exoplanet Survey Satellite (TESS) mission said:

It’s astonishing to me that the best way to study exoplanet interiors is by planets ripped apart and absorbed by their white dwarf host star. It is great to see progress in this research area and to have solid evidence that planets with Earth-like compositions are common – fueling our confidence that an Earth-like planet around a very nearby normal star is out there waiting to be found.

Bottom line: According to a new study, the ingredients that the Earth is composed of are the same elements, in the same proportions, as material in planetary systems elsewhere.