How unique is Earth?

Scientists studying white dwarf stars have found that some contain traces of rocky debris very similar in composition to rocks found on Earth. The finding suggests that worlds similar to Earth might be common in our Milky Way galaxy. 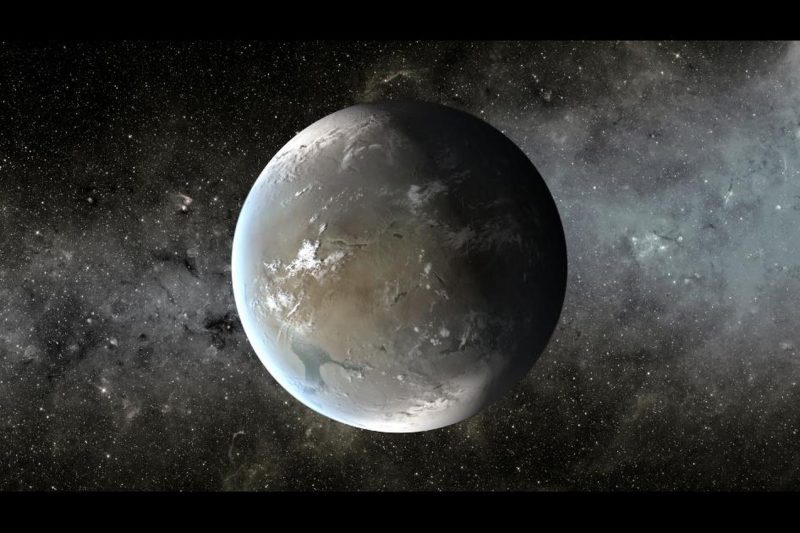 Artist’s concept of Kepler-69f, a small rocky world that may have water. The new study suggests that many small rocky planets like this are probably quite similar to Earth or Mars in their composition. Image Via NASA/The Verge.

Assuming that all worlds in space are unique in some way … just how unique is Earth? Are there other planets out there with similar compositions, oceans, maybe even living things? We still don’t know for sure, although a quickly-growing number of rocky exoplanets at least similar in size to Earth are being discovered. But now, a new study of white dwarf stars by researchers from the University of California, Los Angeles (UCLA) provides fresh evidence that planets like Earth are probably quite common in our galaxy, an exciting implication.

The peer-reviewed study, published on October 18, 2019, in the journal Science, suggests there are many rocky planets with similar geochemistry as Earth. Various telescopes were used, primarily the W.M. Keck Observatory in Hawaii.

According to Edward Young, a UCLA professor of geochemistry and cosmochemistry:

We have just raised the probability that many rocky planets are like the Earth, and there’s a very large number of rocky planets in the universe. We’re studying geochemistry in rocks from other stars, which is almost unheard of.

As Hilke Schlichting, a UCLA associate professor of astrophysics and planetary science, explained, determining the composition of rocky material so far away is not an easy task:

Learning the composition of planets outside our solar system is very difficult. We used the only method possible – a method we pioneered – to determine the geochemistry of rocks outside of the solar system. 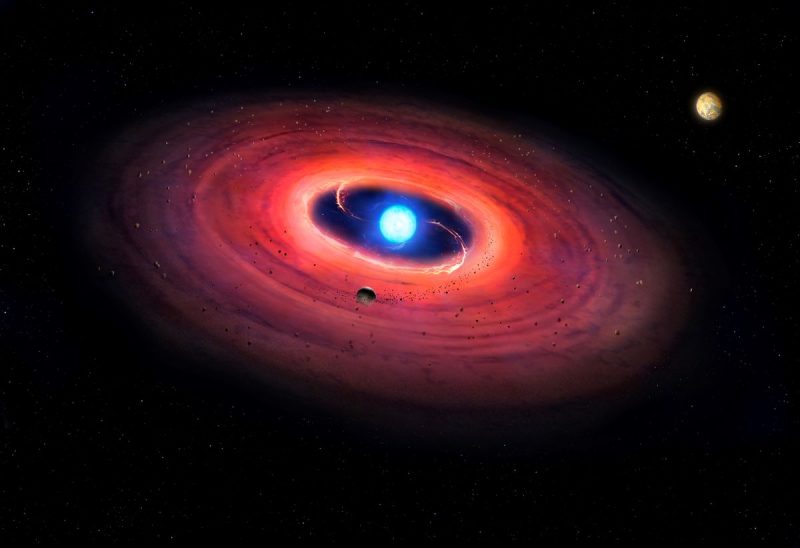 Artist’s concept of a white dwarf star with a debris disk and small planets. The new study suggests that many small rocky planets like this are probably quite similar to Earth or Mars in their composition. Image via Mark Garlick/UCLA.

The results suggest that many rocky planets likely have an oxidation rate – oxygen fugacity – similar to that of Earth or Mars. From the abstract:

The researchers developed a unique method for analyzing the geochemistry of such worlds, without looking at the planets themselves. Instead, they studied the rocky debris left over from planets that were destroyed around white dwarf stars. They have analyzed the debris from six white dwarfs so far, and the results were intriguing. The closest white dwarf star studied is about 200 light-years from Earth and the farthest is 665 light-years away. 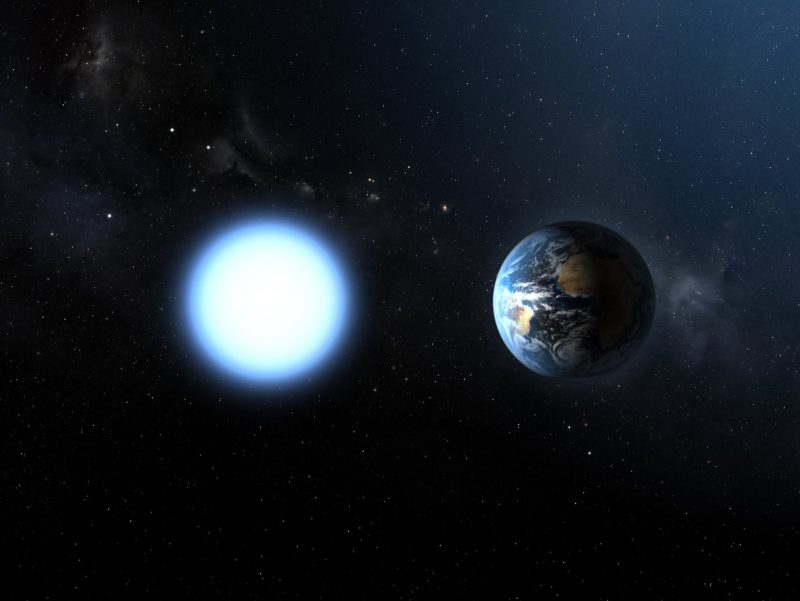 White dwarf stars are very small, about the same size as Earth, but much, much denser. They are the hot remaining cores of sun-like stars that have burned out. Scientists have found that rocky debris from former planets around some white dwarfs is very similar in composition to rocks from Earth and Mars. Image via ESA.

Normally, just hydrogen and helium would be found in a white dwarf star, but instead the researchers also found silicon, magnesium, carbon and oxygen. Such elements would come from rocky planets that used to orbit the stars. As Alexandra Doyle, a graduate student at UCLA who led the new study, explained:

If I were to just look at a white dwarf star, I would expect to see hydrogen and helium. But in these data, I also see other materials, such as silicon, magnesium, carbon and oxygen – material that accreted onto the white dwarfs from bodies that were orbiting them.

Rocks in our solar system – from Earth, Mars and elsewhere – are similar in composition, with a lot of oxidized iron. The iron in the rocky material around the white dwarfs had been oxidized in a similar manner, according to Young: 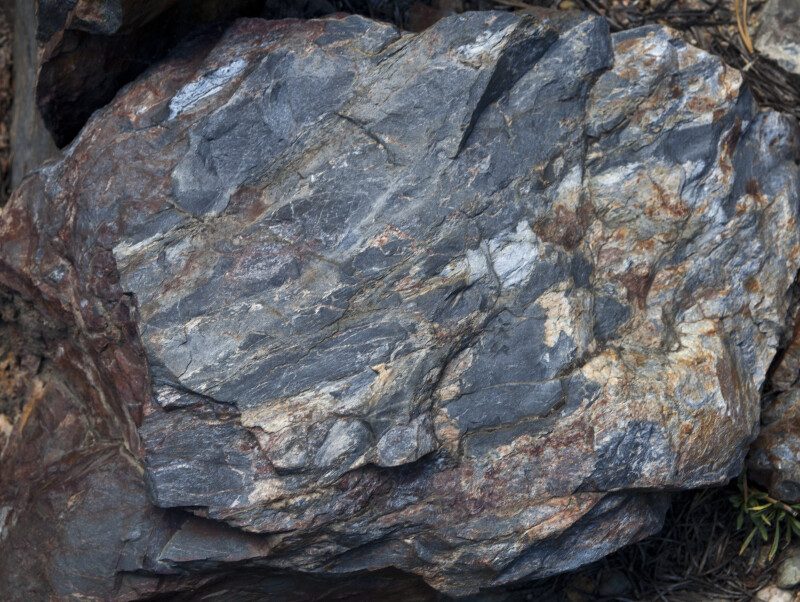 A gray rock on Earth from Yosemite National Park, California that has experienced oxidization. Evidence for similar oxidization has been found in rocky debris around white dwarf stars, from former planets that were similar in composition to Earth or Mars. Image via Clippix ETC.

So just how similar is the rocky debris around the white dwarfs to that of planets like Earth and Mars? Very, according to Doyle:

Very similar. They are Earth-like and Mars-like in terms of their oxidized iron. We’re finding that rocks are rocks everywhere, with very similar geophysics and geochemistry.

It’s always been a mystery why the rocks in our solar system are so oxidized. It’s not what you expect. A question was whether this would also be true around other stars. Our study says yes. That bodes really well for looking for Earth-like planets in the universe.

The evidence for oxidation in the rocky debris around the white dwarfs is tantalizing, since it points to similar geological processes on the planets that used to exist. As Schlichting said:

If extraterrestrial rocks have a similar quantity of oxidation as the Earth has, then you can conclude the planet has similar plate tectonics and similar potential for magnetic fields as the Earth, which are widely believed to be key ingredients for life. This study is a leap forward in being able to make these inferences for bodies outside our own solar system and indicates it’s very likely there are truly Earth analogs. 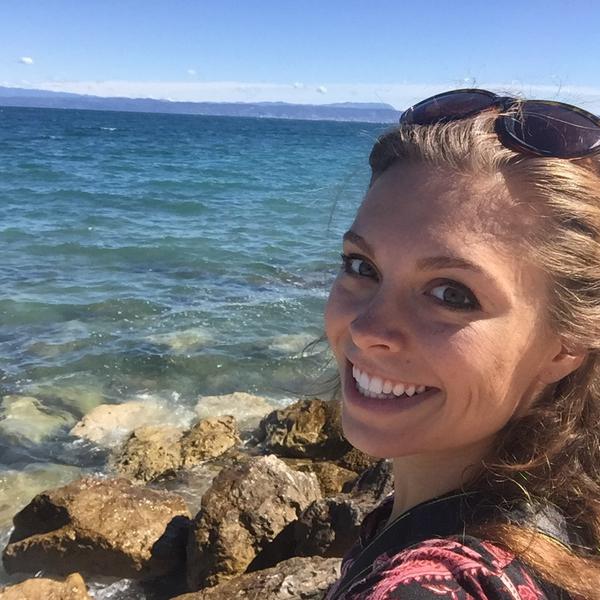 Alexandra Doyle, a graduate student at UCLA, who led the new study. Image via UCLA.

We can determine the geochemistry of these rocks mathematically and compare these calculations with rocks that we do have from Earth and Mars. Understanding the rocks is crucial because they reveal the geochemistry and geophysics of the planet.

This new study not only provides fascinating new details on how Earth-like planets may be quite common, it is also a great example of astrophysicists and geochemists working together, according to Young:

Bottom line: A new study from UCLA suggests that there are probably many rocky worlds in our galaxy that are similar in composition and geochemistry to Earth or Mars.

Source: Oxygen fugacities of extrasolar rocks: Evidence for an Earth-like geochemistry of exoplanets