The newly-discovered Kepler 22b, 600 light-years away, could be a large, rocky planet with a surface temperature of about 72 degrees Farenheit.

A team of researchers has discovered the first super-Earth orbiting in the habitable zone of a star similar to the sun. It’s called Kepler 22b, and it could be a large, rocky planet with a surface temperature of about 72 degrees Fahrenheit, comparable to a comfortable spring day on Earth. This landmark finding will be published in The Astrophysical Journal. 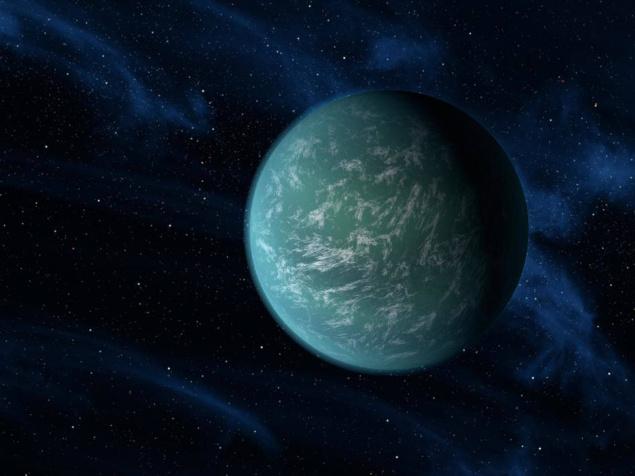 This artist’s conception illustrates Kepler-22b, a planet known to comfortably circle in the habitable zone of a sun-like star. Image credit: NASA/Ames/JPL-Caltech

The discovery team used photometric data from the NASA Kepler space telescope, which monitors the brightness of 155,000 stars. This discovery is the first detection of a possibly habitable world in orbit around a sun-like star.

The host star lies about 600 light-years away from us toward the constellations of Lyra and Cygnus. The star has a mass and a radius only slightly smaller than that of our sun. As a result, the host star is about 25% less luminous than the sun.

How far is a light year?

Kepler 22b orbits the star with an orbital period of 290 days, compared to 365 days for the Earth, at a distance about 15% closer to its star than the Earth from the sun. This results in the planet’s balmy temperature. It orbits in the middle of the star’s habitable zone, where liquid water is expected to be able to exist on the surface of the planet. Liquid water is necessary for life as we know it, and this new planet might well be not only habitable, perhaps even inhabited.

Numerous large, massive gas giant planets have been detected previously in habitable-zone orbits around solar-type stars, but gas giants are not thought to be capable of supporting life. This new exoplanet is the smallest-radius planet discovered in the habitable zone of any star to date. It is about 2.4 times larger than that of the Earth, putting it in the class of exoplanets known as super-Earths.

While the mass of Kepler 22b is not known, it must be less than about 36 times that of the Earth, based on the absence of a measurable Doppler (radial velocity) wobble in the host star. The masses of several other super-Earths have been measured with the Doppler technique and determined to lie in the range of about 5 to 10 times that of the Earth: Some appear to be rocky, while others probably contain major fractions of ice and water. Either way, the new planet appears to be habitable.

Bottom line: A team of researchers has discovered the first super-Earth – named Kepler 22b – orbiting in the habitable zone of a star similar to the sun 600 light-years from Earth.

Read more from the Carnegie Institute of Science