It’s record-breaking because it’s so faint. Could this galaxy be a sign of many yet-unknown dwarf galaxies orbiting our Milky Way? And do we now have a way to detect them? Astronomical theorists hope so! 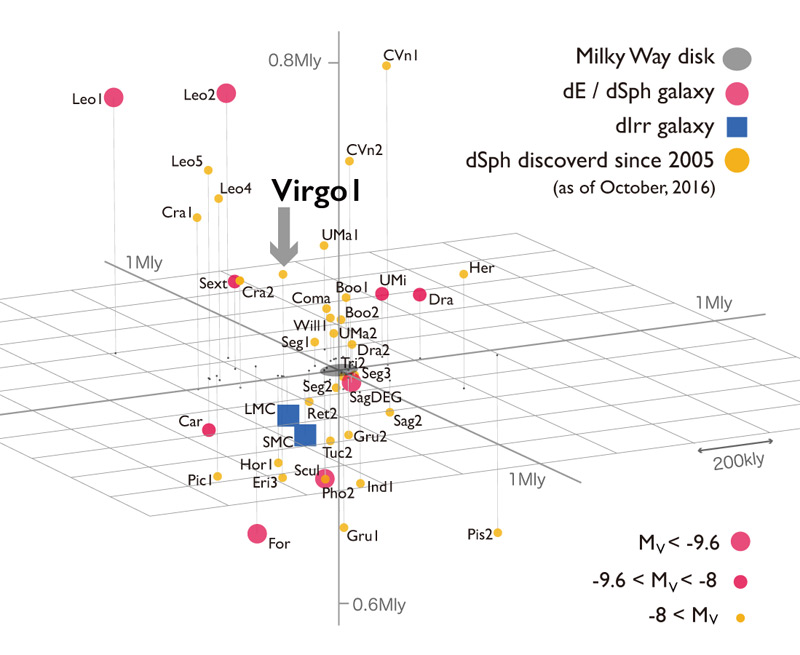 Satellite galaxies associated with the Milky Way, which is shown here as the gray oval in the center of the diagram. Squares are Large and Small Magellanic Clouds and circles are dwarf spheroidal galaxies. Via subarutelescope.org.

An international team led by astronomers from Tohoku University in Japan said on November 21, 2016 that it has found an extremely faint dwarf satellite galaxy orbiting the center of our Milky Way galaxy. They’ve named the satellite Virgo I, because it lies in the direction of the constellation Virgo the Maiden. The galaxy is very faint, perhaps the faintest satellite galaxy yet found. Its discovery suggests the presence of a large number of yet-undetected dwarf satellites in the halo of the Milky Way. That would be good news to astronomical theorists, whose leading theories about our universe require many more dwarf galaxies for our Milky Way and other galaxies than have been observed so far. 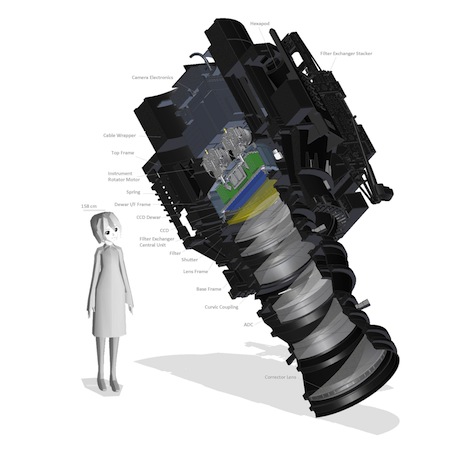 Hyper Suprime-Cam (HSC) is a gigantic digital still camera for 8.2 m Subaru Telescope, which is located on the summit of Mauna Kea in Hawaii. Image via naoj.org.

Astronomers have been pondering the puzzle of dwarf galaxies for some years. Standard cosmology predicts there should be hundreds of dwarf galaxies in orbit around galaxies like our Milky Way galaxy. But, so far, astronomers know of only about 50 small galaxies within about 1.4 million light-years of the Milky Way, and it’s possible they’re not all true Milky Way satellites. A statement issued by Tohoku University astronomers on November 21, 2016 explained:

Formation of galaxies like the Milky Way is thought to proceed through the hierarchical assembly of dark matter, forming dark halos, and through the subsequent infall of gas and star formation affected by gravity. Standard models of galaxy formation in the context of the so-called cold dark matter (CDM) theory predict the presence of hundreds of small dark halos orbiting in a Milky Way-sized dark halo and a comparable number of luminous satellite companions. However, only tens of satellites have ever been identified. This falls well short of a theoretical predicted number, which is part of the so-called missing satellite problem.

In other words, if what we think we understand about the universe is correct, where are the rest of the dwarf galaxies?

If that’s the case, then the detection of Virgo 1 might be a sign we can now detect much-fainter galaxies than before. If so, astronomers might begin detecting many more of them.

And, if that happens, many astronomical theorists will be glad! It’ll mean their theories are on the right track.

The position of Virgo I in the constellation of Virgo (left). The right panel shows a density map of Virgo I’s member stars in a 0.1 deg x 0.1 deg area, based on the stars located inside the green zone in the color-magnitude diagram of Virgo I shown in Figure 4. The color range from blue-white-yellow-red indicates increasing density. Image via Tohoku University/National Astronomical Observation of Japan

We have carefully examined the early data of the Subaru Strategic Survey with HSC and found an apparent over density of stars in Virgo with very high statistical significance … Surprisingly, this is one of the faintest satellites, with absolute magnitude of -0.8 in the optical waveband.

Homma worked under the guidance of his advisor, Masashi Chiba, and their international collaborators. According to Chiba, the discovery has profound implications:

This discovery implies hundreds of faint dwarf satellites waiting to be discovered in the halo of the Milky Way.

How many satellites are indeed there and what properties they have, will give us an important clue of understanding how the Milky Way formed and how dark matter contributed to it.

The team’s finding is published in the peer-reviewed Astrophysical Journal in its November 14, 2016 on-line version and November 20, 2016 in the printed version.

Bottom line: Astronomers said on November 21, 2016 that they’ve found a record-breakingly faint dwarf satellite galaxy orbiting the center of our Milky Way galaxy. They’ve named the satellite Virgo I. It might be a sign that many more faint galaxies like this one orbit the Milky Way, and, if so, it will help confirm leading astronomical theories.