Scheduled for launch in 2026, the Dragonfly mission will look for clues to the origins of life, and possibly even evidence of life itself, on Saturn’s alien yet remarkably Earth-like moon Titan.

Reprinted with permission from AmericaSpace.

It was a much-anticipated announcement, but the winner of NASA’s next New Frontiers mission selection is … Dragonfly! This ambitious mission will be the first return to Saturn’s moon Titan since Cassini/Huygens, and this drone-like rotorcraft will fly to various locations on Titan to search for clues to the origins of life, and possibly even evidence of life itself, on this alien yet remarkably Earth-like moon.

Instead of a rover as on Mars, NASA chose a drone-like design for Dragonfly. It will be able to fly to different locations and take samples of the organic-rich sands to analyze them. Since Titan’s atmosphere is four times denser than Earth’s, it is actually easier to fly on Titan than on Earth. Dragonfly will be the first such rotorcraft sent to explore another world. NASA Administrator Jim Bridenstine said:

With the Dragonfly mission, NASA will once again do what no one else can do. Visiting this mysterious ocean world could revolutionize what we know about life in the universe. This cutting-edge mission would have been unthinkable even just a few years ago, but we’re now ready for Dragonfly’s amazing flight.

We’re sending a spacecraft to Saturn’s largest moon Titan! #Dragonfly is a dual-quadcopter & will be able to fly miles & miles across Titan’s surface, landing in a variety of locations to conduct science. Congrats to the @JHUAPL team, we’re all so excited! https://t.co/ChyYRDvOXF pic.twitter.com/7SjrVOPCjW

This is an exciting mission, but it will take time to get to Titan. Dragonfly will launch in 2026 and arrive in 2034. The Saturn system is a long way away from Earth, at 886 million miles (1.4 billion kilometers) from the sun (about 10 times farther than Earth).

Titan is one of the most fascinating and exotic worlds in our solar system, a moon larger than Mercury with rain, rivers, lakes and oceans. But it is also bitterly cold – about -290 degrees Fahrenheit (-179 degrees Celsius) – and Titan’s “water” is liquid methane/ethane. Yet the landscape of rivers and shorelines looks eerily Earth-like.

Titan also has vast sand dunes composed of hydrocarbons – organic materials – that cover the surface. Titan’s thick nitrogen atmosphere is filled with an organic smog that obscures the surface from view from orbit. As well as the rain, other organic materials fall to the surface like snow. Titan is rich in these organics, and scientists think it is similar to what the early Earth looked like, and has similar prebiotic chemistry to what led to life on our planet.

There is even now thought to be a subsurface water ocean on Titan, similar to those on moons like Europa, Enceladus and Ganymede, among others. 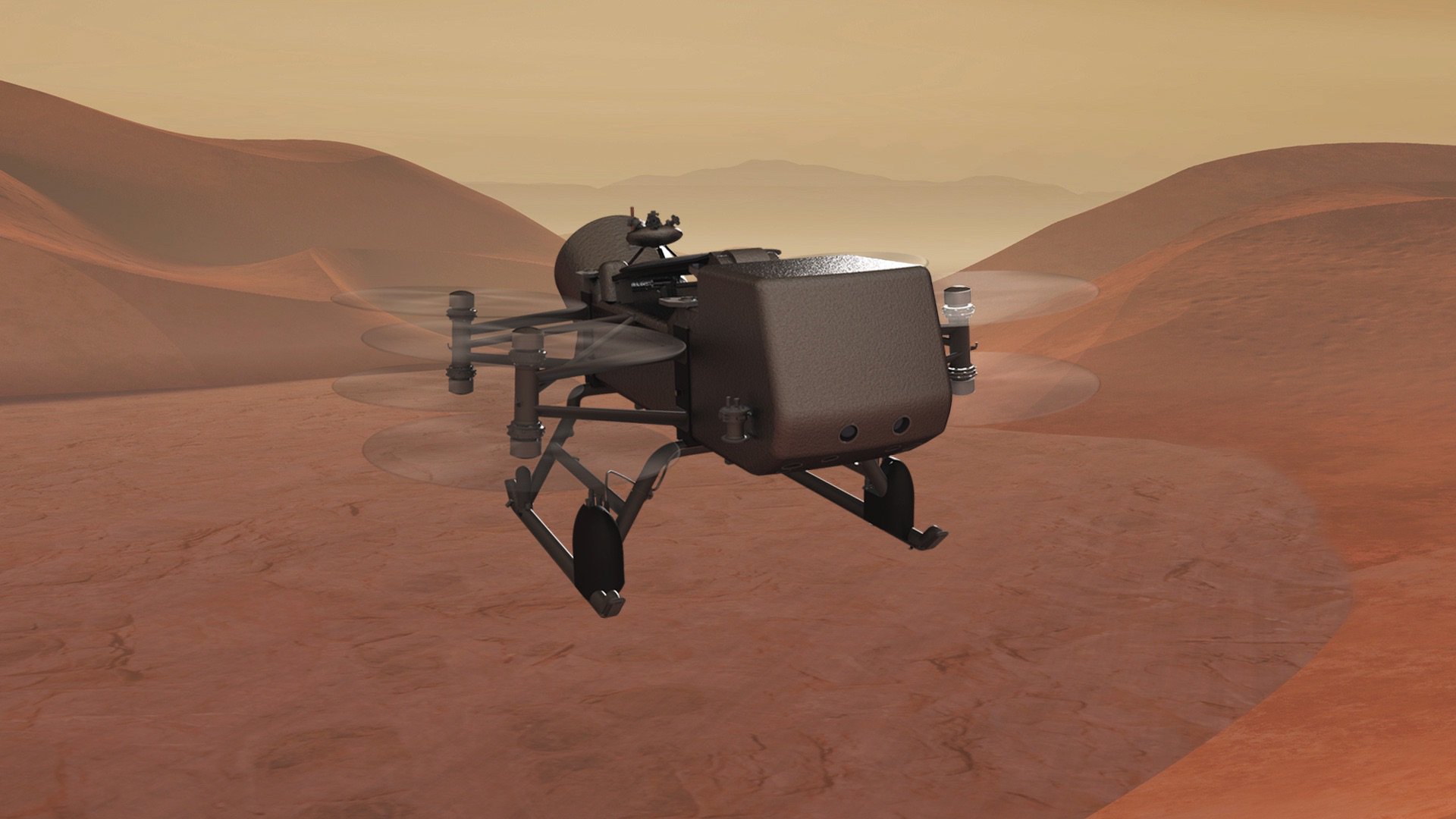 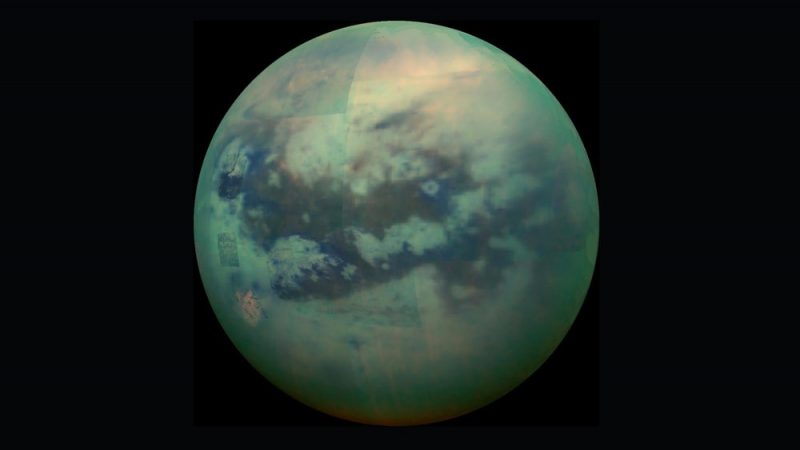 Titan, as seen in radar images from NASA’s Cassini spacecraft, is a complex world with methane/ethane rain, rivers, lakes and seas. Could it support life of some kind? Image via NASA/JPL.

Thomas Zurbuchen is NASA’s associate administrator for science at the agency’s headquarters in Washington. He said:

Titan is unlike any other place in the solar system, and Dragonfly is like no other mission. It’s remarkable to think of this rotorcraft flying miles and miles across the organic sand dunes of Saturn’s largest moon, exploring the processes that shape this extraordinary environment. Dragonfly will visit a world filled with a wide variety of organic compounds, which are the building blocks of life and could teach us about the origin of life itself.

With liquids both on the surface and below, and plenty of organics, some scientists even speculate there could some form of primitive life on Titan right now, despite the severe cold.

NASA’s last visit to Titan was back in 2005, when the Huygens probe, part of the Cassini mission, successfully landed on what appeared to be a dry riverbed, strewn with stones and boulders of rock-hard water ice.

The Dragonfly mission has a lot of science and other data to help it succeed – 13 years worth from the Cassini mission at Saturn, which ended in late 2017. It will be able to use a calm weather period to land, find a safe initial landing site and scout scientifically interesting targets. 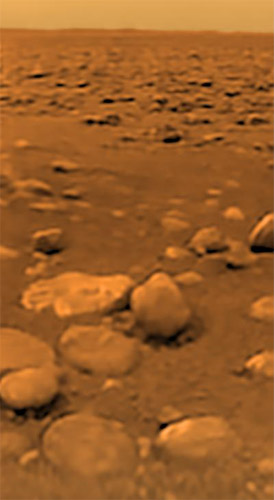 The surface of Titan as seen, for the first time ever, by the Huygens probe on Jan. 14, 2005. The “rocks” are actually rounded blocks of solid water ice. Image via ESA/NASA/JPL/University of Arizona.

It will first land at the equatorial Shangri-La dune fields, which are similar to the linear dunes in Namibia in southern Africa. Dragonfly will explore this region in short flights, building up to a series of longer “leapfrog” flights of up to five miles (eight km). It will pause along the way to take samples from areas with diverse geography. It will later reach Selk Crater, where there is evidence of past liquid water, organics and energy, which together make up the recipe for life. Dragonfly will eventually fly more than 108 miles (175 km), nearly double the distance traveled to date by all the Mars rovers combined.

Dragonfly was one of two finalists for the next New Frontiers mission, the other being a new comet sample-return mission called Comet Astrobiology Exploration Sample Return (CAESAR). Unfortunately due to budget, only one of the two missions could be chosen, and this time it was Dragonfly. Lori Glaze, director of NASA’s Planetary Science Division, said:

The New Frontiers program has transformed our understanding of the solar system, uncovering the inner structure and composition of Jupiter’s turbulent atmosphere, discovering the icy secrets of Pluto’s landscape, revealing mysterious objects in the Kuiper belt, and exploring a near-Earth asteroid for the building blocks of life. Now we can add Titan to the list of enigmatic worlds NASA will explore.

The Dragonfly mission will be an exciting one in the exploration of the outer solar system. Not only will it search for clues as to how life originated on Earth by studying the prebiotic chemistry of Titan, it may even find evidence that life itself existed – or still exists – on this oddly Earth-like yet utterly alien world.

Bottom line: Scheduled for launch in 2026, Dragonfly is due to arrive at Titan in 2034. It will look for clues to the origins of life, and possibly even evidence of life itself, on Saturn’s largest moon.