Our sun’s planets orbit in a plane extending from the sun’s equator. Astronomers have found a double-star system whose planet-forming disk has flipped up – perpendicular to what we’d expect – over the poles. What would nature be like on one of these worlds? 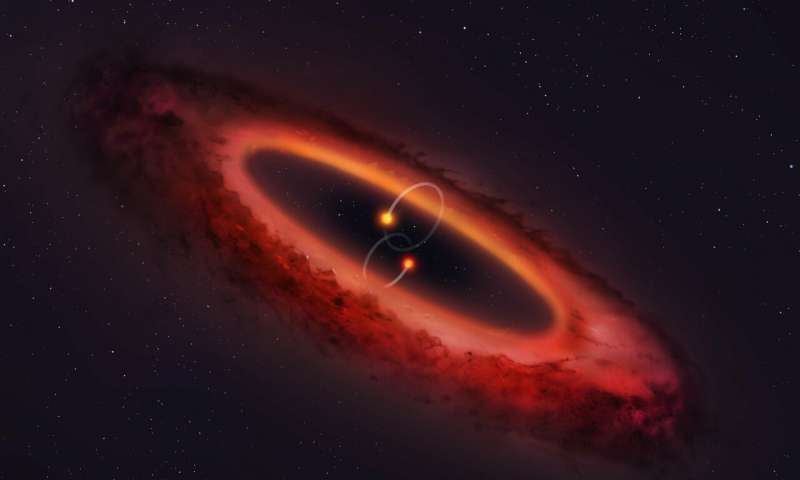 Artist’s concept of a view of a double star system and surrounding pole-oriented planetary disk. Image via University of Warwick/Mark Garlick.

We’re used to thinking of planets orbiting their stars in the plane of the stars’ equators. It makes sense to think that, if you think about how solar systems came to be. According to astronomers, they formed from great clouds of gas and dust in space, which were spinning and collapsed as they spun into flat disks around a central star. So it’s surprising to hear of new research showing the first confirmed example of a young double star system – surrounded by a planet-forming disk – whose disk lies at right angles to the orbits of the two central stars. In other words, the two stars do orbit more or less in the plane of each other’s equators. But their star-forming disk has flipped up over the orbital plane of those stars. It’s oriented instead above the stars’ poles.

The new research was published January 14, 2019, in the peer-reviewed journal Nature Astronomy.

Prior to this observation, theorists said this orientation was possible for planet-forming disks, but this is the first time it’s been seen. The observation proves such systems can exist. What’s more, these astronomers said they might be “relatively common.”

What would it be like to stand on a world in this system? On such planets – formed by pole-oriented disks, orbiting double stars – some aspects of nature would look very different. For one thing, the two host stars would appear to move in and out of the disk plane, giving objects two shadows at times. Our seasons on Earth vary throughout the year, as we orbit the sun. A polar-orbiting planet in a double star system would have seasons that varied according to latitude on the planet, as the different latitudes received more or less illumination throughout the polar orbit around the double star.

Grant M. Kennedy at the University of Warwick in the U.K. led an international team of astronomers who used the Atacama Large Millimeter/sub-millimeter Array (ALMA) to obtain high-resolution images of the disk, which, they say, is about the same size as the asteroid belt in our solar system. He commented:

Disks rich in gas and dust are seen around nearly all young stars, and we know that at least a third of the ones orbiting single stars form planets. Some of these planets end up being misaligned with the spin of the star, so we’ve been wondering whether a similar thing might be possible for circumbinary planets.

A quirk of the dynamics means that a so-called polar misalignment should be possible, but until now we had no evidence of misaligned disks in which these planets might form.

Kennedy and his team used ALMA to pin down the orientation of the ring of gas and dust in the system. Their statement explained:

The orbit of the binary was previously known, from observations that quantified how the stars move in relation to each other. By combining these two pieces of information they were able to establish that the dust ring was consistent with a perfectly polar orbit. This means that while the stellar orbits orbit each other in one plane, like two horses going around on a carousel, the disk surrounds these stars at right angles to their orbits, like a giant ferris wheel with the carousel at the center.

Perhaps the most exciting thing about this discovery is that the disk shows some of the same signatures that we attribute to dust growth in disks around single stars. We take this to mean planet formation can at least get started in these polar circumbinary disks. If the rest of the planet formation process can happen, there might be a whole population of misaligned circumbinary planets that we have yet to discover, and things like weird seasonal variations to consider.

We used to think other solar systems would form just like ours, with the planets all orbiting in the same direction around a single sun. But with the new images we see a swirling disk of gas and dust orbiting around two stars. It was quite surprising to also find that that disk orbits at right angles to the orbit of the two stars.

Incredibly, two more stars were seen orbiting that disk. So if planets were born here there would be four suns in the sky! 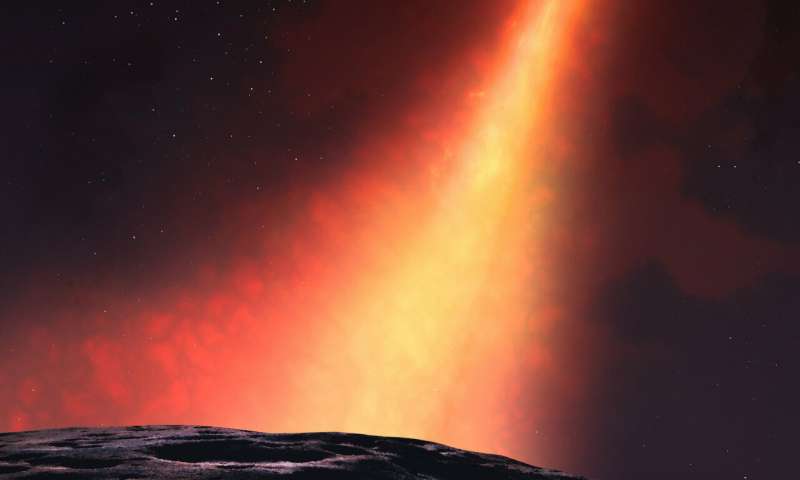 Artist’s concept of a pole-oriented planet-forming disk, from the surface of one of its planets. The disk would appear as a broad band, rising almost perpendicularly from the planet’s horizon. Image via University of Warwick/Mark Garlick.

Bottom line: For the first time, astronomers have found a double-star system whose planet-forming disk has flipped up – perpendicular to what we’d expect – over the poles.

Source: A circumbinary protoplanetary disc in a polar configuration