It wasn’t visible to the eye, but some telescope users in Earth’s Southern Hemisphere caught it at its May 25 closest approach. Now Northern Hemisphere observers will get their chance. Charts here, and check out this cool video!

A large double asteroid passed Earth this weekend (May 25, 2019) at the very safe distance of about 13.5 times the Earth-moon distance. It wasn’t visible to the eye, but it was long expected, and – as the video above shows – some observers caught it on film. This video – from Samford Valley Observatory in Australia – was made with images captured with a 14″ telescope around the time of 1999 KW4’s closest approach to Earth. It shows the space rock gliding in front of the stars. In addition, radar observations of asteroid 1999 KW4 are scheduled from Arecibo Observatory in Puerto Rico from May 29 to June 7, and from NASA’s Goldstone Solar System Radar in the desert near Barstow, California, from May 26 to 31. The radar images should show the asteroid’s dual nature; we’ll add them to this post as we see them. In the meantime, the opportunity for amateur astronomers with telescopes to observe this asteroid still exists; look for charts for telescope users below.

The left-hand image shows observations from the the SPHERE instrument on ESO’s Very Large Telescope of asteroid 1999 KW4, as it swept past on May 25, 2019. The angular resolution in this image is equivalent to picking out a single building in New York … from Paris. An artist’s impression of the asteroid pair is shown on the right. Read more about this image from ESO.

1999 KW4 is moving fast. It’s traveling at 48,123 miles per hour (77,446 km/h or 21.5 km/second), relative to Earth. Its fast speed, and the size of this asteroid, are what allow amateur observers to see it move in front of the stars. Sky enthusiasts equipped with telescopes eight inches in diameter and bigger might be able to catch this asteroid. One of the best techniques for locating it will be to point a computerized telescope to a star known to be in the space rock’s path, and wait for the asteroid to appear. It will look like a very slow moving “star.” At first, the asteroid might be tricky to detect since its motion will appear very slow. If you are pointing at the correct time and location in the sky, take a good look at the visual field of the telescope. Be patient. Good things come to those who wait.

Another idea is to draw a sketch of the positions of the brightest stars and a few other stars you see at the eyepiece. Then compare the positions just 10 minutes later, and yes, you will find the asteroid!

By updating your sketches showing the asteroid’s position with respect to the stars, you can also show the huge space rock to other people, so they can see the object that’s making news with their own eyes.

The location of asteroid 1999 KW4 during closest approach was most favorable for observers in Earth’s Southern Hemisphere. Now the space rock is drifting to other constellations, and observers in the Northern Hemisphere should be able to locate it beginning around May 27, 2019, when the asteroid will come over our southern horizon. See charts below.

Go to In-the-Sky.org for more observing information on 1999 KW4 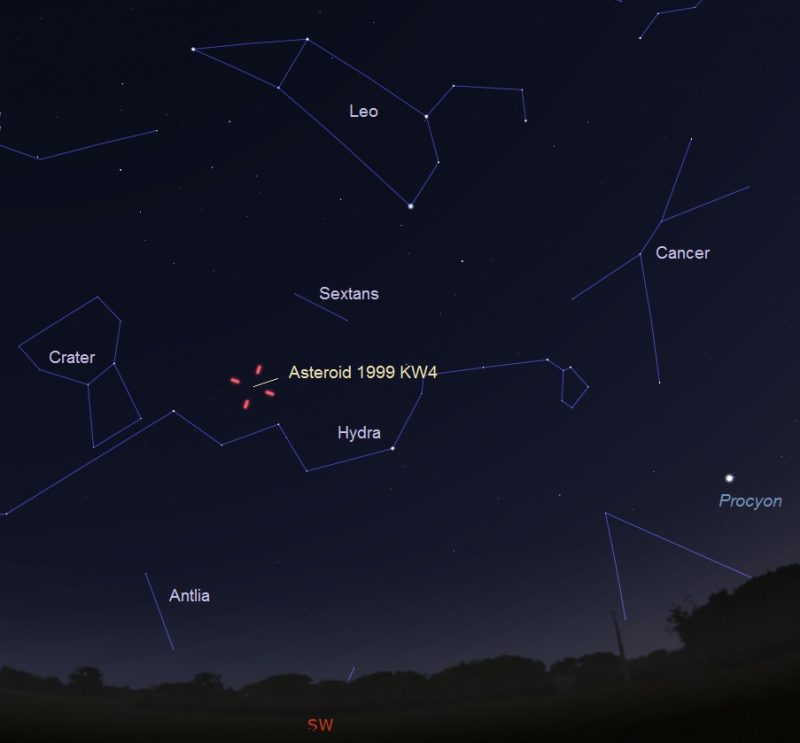 Location of asteroid 1999 KW4 on May 27, 2019, at nightfall, as seen from the central U.S., facing southwest. Illustration by Eddie Irizarry using Stellarium. 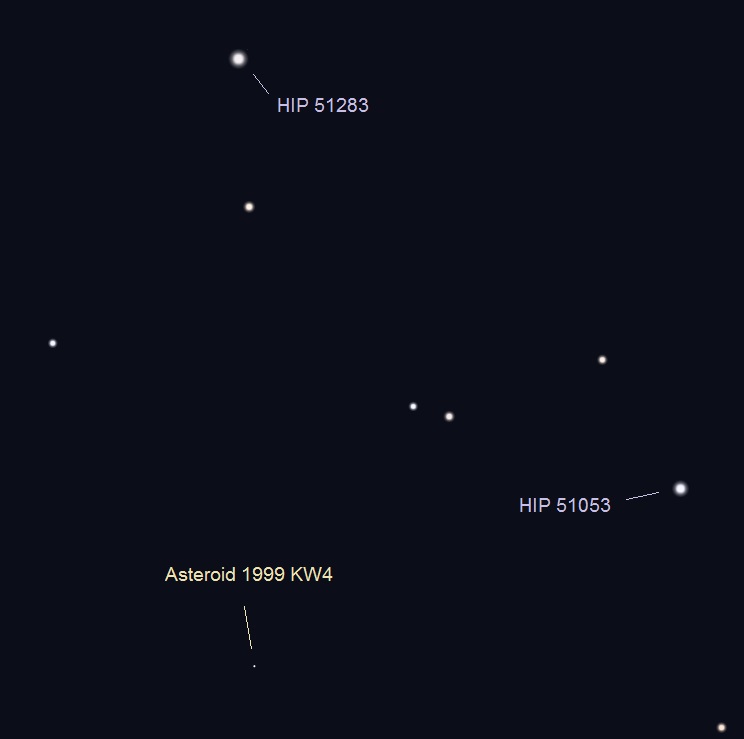 On May 27, 2019, at around 9:45 p.m. CDT, observers in the U.S. using computerized or Go To telescopes can point their instruments to stars HIP 51053 or HIP 51283 to find asteroid 1999 KW4 slowly moving in front of the stars. Illustration by Eddie Irizarry using Stellarium. 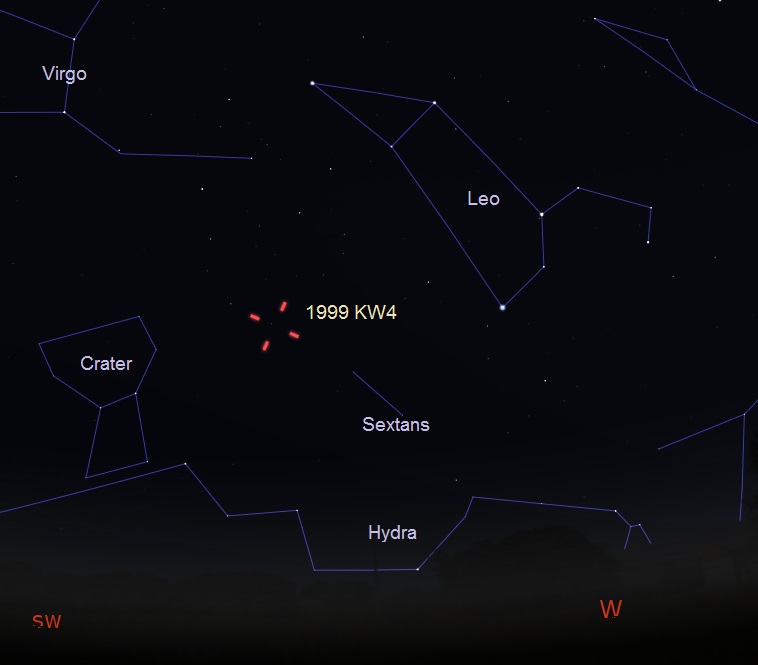 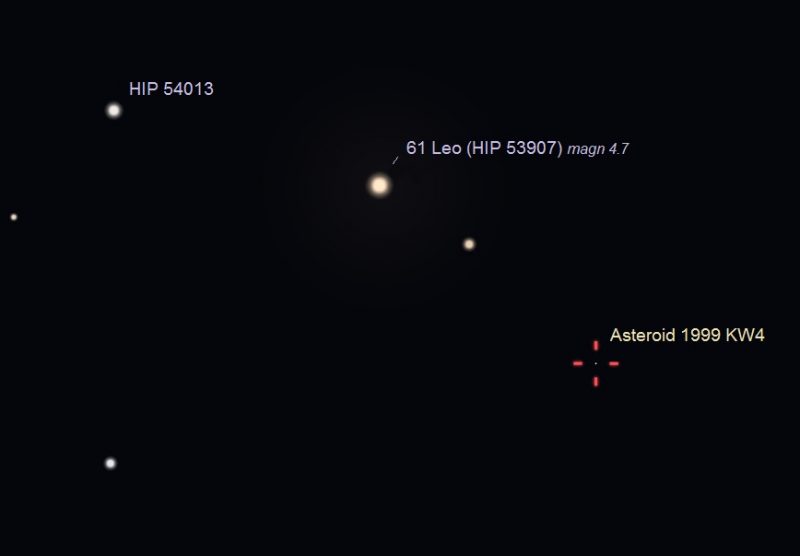 An interesting facet of asteroid 1999 KW4 is its shape. It has an oblate shape with an equatorial ridge, similar to asteroids Bennu and Ryugu. Observations suggest the secondary asteroid, or asteroid moon, of 1999 KW4 orbits the main space rock every 16 hours at a distance of about 1.6 miles (2.6 km).

The video below – from a NASA Goldstone Radar planning document – shows the orbital motion of 1999 KW4 from December 2017 until July 2019, in a heliocentric or sun-centered reference frame. The asteroid makes two close flybys of Earth during this period. 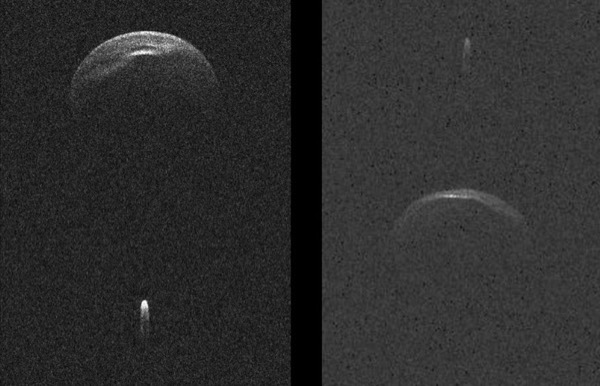 1999 KW4 was discovered by the Lincoln Near-Earth Asteroid Research (LINEAR) astronomical survey in Socorro, New Mexico, in 1999. It has been classified as a Near-Earth object and a potentially hazardous object by the Minor Planet Center. However, the orbit of this huge space rock is well understood and known to pose no risk to Earth. During the closest of its approaches to Earth, its orbit brings it no closer than five Earth-moon distances.

The next encounter with Earth, which will be even closer than this year’s, occurs on May 25, 2036.

Take a look at the curious shape of asteroid 1999 KW4 and its moon in this video:

Bottom line: Professional and amateur astronomers geared up to observe asteroid 1999 KW4 – a mile-wide, oddly shaped asteroid with a companion moon – around its closest approach on May 25, 2019. Now observers in the Northern Hemisphere should be able to locate it beginning around May 27, 2019, when the asteroid will come over our southern horizon.